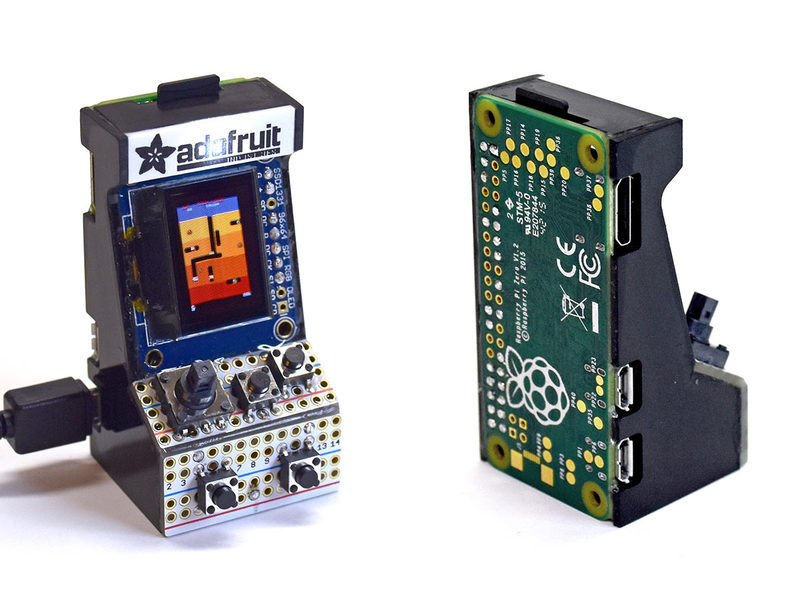 The project is built around a Raspberry Pi Zero computer, one of our 0.96" RGB OLED displays, an I2S class D audio amplifier and a few assorted odds and ends (buttons, navigation switch, Perma-Proto board, etc.).

Since this project doesn’t require a camera, I used a “V1” Pi Zero that I had on-hand. If you’re looking to create the very smallest possible thing, and don’t need a camera, be aware that the clip on the end of a newer “V1.3” Pi Zero protrudes a couple of millimeters past the board edge. Depending on your level of obsessiveness, you might need to remove that (destroying the connector and possibly the board) or specifically hunt down a V1 board (as if Pi Zeros were’t elusive enough).

Most of the connections for the display and audio amp must go to specific pins on the Pi; they rely on hardware features of the board and are not negotiable. Others like the controls could be routed elsewhere if needed.

Woo, that’s a lot of connections! Even following along with a GPIO reference card I botched a few wires and had to do some troubleshooting. If you mix up the button inputs, that can be easily fixed in software, but the screen and amp are very specific about the pins used.

The LED sequin is totally optional…just thought it would be a nice finishing touch to have a backlit marquee.

Please remember, this is not a kit or a how-to. The steps are lacking depth, and attempting something like this requires a lot of expensive tools and parts, prior experience with small project builds and Pi gaming specifically, and a willingness to improvise and/or fail repeatedly.

Another thought was to make the entire case from more Perma-Proto boards carefully cut to shape. Cool, but time-consuming. Perhaps this is reasonable with something like an Othermill.

Extra bonus challenge: I’ve been shifting to using lead-free solder, and this project seemed a good opportunity to go all-in. I might take this thing to a Maker Faire or something, where kids would play with it and then go eat funnel cakes…lead-free just made good sense.

Lead-free soldering is a little more tricky, but nowhere near as dreadful as some would have you believe. Patience and a good hot iron, no big deal. I splurged on a refurbished Metcal iron several years back and have never once regretted the purchase. I’ve heard nothing but praise for Hakko’s stuff too. The patience part though, that’s something not for sale anywhere, you’ll have to cultivate that yourself.

Could it go smaller? Undoubtedly! Other than clipping the corner off the audio amp board, these are all stock parts and no extreme measures were taken to further reduce their volume, Ben Heck-style. Creative placement of the Pi board at an angle might reduce the height. Slimmer buttons are easy to find. Smaller Linux boards will come along, or might already be out there. Maybe some of those super-hi-res smartwatch OLED screens will start trickling into the hobbyist market.

But is is practical? As I’ll explain a bit on the next page, the coarse resolution of the screen makes the games difficult to play (especially something like Donkey Kong, where climbing ladders requires aligning the character within a couple of pixels)…I suspect a lot of the “playing” is just muscle memory from past experience. Honestly the whole thing’s a bit gimmicky for the sake of smallness. Sharing it for a laugh.

One bit I’m extremely happy with though is the I2S audio amp. Even through a tiny 1" speaker, the sound is incredible! That’s an item I’ll definitely be using on future (and more sensibly-sized) emulator projects. 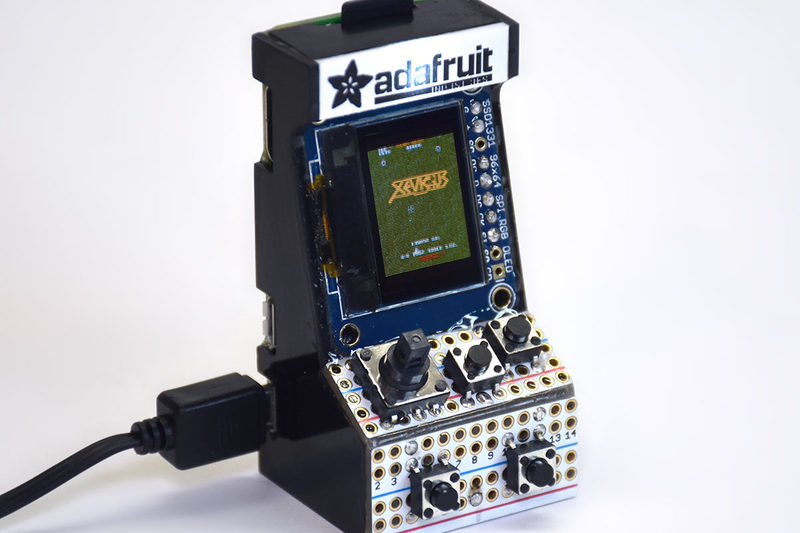 Here’s where things get really jargon-y. If you’ve not done a Raspberry Pi retro gaming project before, and specifically a PiTFT-based build, this might all be Greek. Prior experience is assumed.

This started with version 3.8.1 of RetroPie, a gaming-centric OS distribution for the Raspberry Pi. They’re up to version 4 now, but I specifically used this older release because it had advmame 0.94 (a specific version of a specific arcade machine emulator) already baked in…I just like how this version renders certain games and how the keyboard input is set up.

The software was loaded on a Raspberry Pi Model B+…an older board no longer made, not a Pi 2 or Pi 3. RetroPie has two separate builds, one for single-core boards, one for multi-core. The Pi Zero and the Model B+ are both single-core, so the card could be used interchangeably between the two. With only one USB port and funky mini HDMI output, the Pi Zero can be a challenge to load up…the Model B+ has an assortment of normal ports (including Ethernet networking), so getting it on the network to install additional software was no big thing.

From other PiTFT-based gaming projects, you might be familiar with three vital pieces of software:

This project does without the first two. Drivers in Linux are fiendishly tricky to write. Instead, a little user-space program called nanoscreen handles the task of copying the main framebuffer directly to the OLED display using SPI transfers. SPI must be enabled (via raspi-config) for this to work.

Because of the way nanoscreen works (more on that in a moment), the display must be configured for 4X the OLED resolution, or 384x256 pixels. Here’s what’s in my /boot/config.txt:

Not all HDMI monitors support this; you might get an “unsupported resolution” or “no signal” alert on the display. Thing to do then is set up and test at a more sensible resolution, then edit /boot/config.txt as a last step before unplugging HDMI and just using the OLED.

fbcp (which was very insightful in writing nanoscreen) uses the Dispmanx library to capture the screen and downsample this to the size of the alternate framebuffer. This scaling is handled on the GPU and is super efficient. However, it presented a problem with the degree of scaling required for this tiny OLED…

Dispmanx provides bilinear interpolation when scaling. This is normally a good thing, it smooths out the jaggies. But bilinear interpolation starts to fall apart when the reduction factor is greater than 2. Very small details can fall “between” each group of 4 pixels used in the interpolation. In some games this is just a visual annoyance, but in others it’s vital. In Pac Man for instance…some of the individual dots around the maze get lost this way, rendering the game unplayable as you can’t always tell which parts of the maze have been cleared. 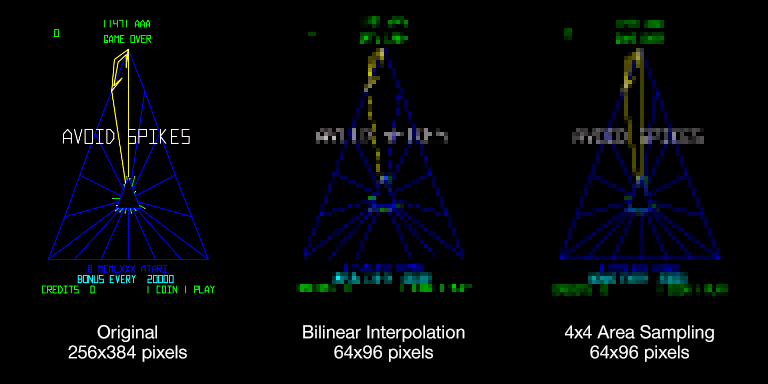 This software-based scaling isn’t the most optimal route…I’m certain Dispmanx could handle it on the GPU using a 2-stage bilinear scale with an intermediate canvas of some sort…but nanoscreen was just an evening project and I couldn’t get into that depth of understanding with Dispmanx; software scaling was familiar and comparatively easy, and runs well enough for what it is.

Something else to improve legibility at this size was to increase all the font sizes in EmulationStation. I edited the default theme file /etc/emulationstation/themes/carbon/carbon.xml and roughly doubled the values accompanying any reference to “fontSize”.

This fixes the game list menu in MAME, but the exit menu and the RetroPie menu that’s used to shut down the system properly are both impossibly small and unreadable. I suspect there are settings for both, but I’ve MAMEd and RetroPie’d enough that these are just navigated from muscle memory.

When I’d found that I’d crossed some of the button wires, it was easier to change the pin numbers in this table than resolder those wires. Recompile as per usual.

RetroPie controls will need to be configured to match your final setup.

As in the earlier “Cupcade” project, the Start and Select buttons can be held to simulate pressing the ESC key to bring up the exit menu in MAME. Normally this menu expects an ENTER key when making a selection…I had to root around to enable using the “A” button for this instead.

In hindsight, it might’ve been easier to squeeze an extra button or two somewhere on the case.

nanoscreen and retrogame are launched automatically at startup by adding lines to /etc/rc.local, just before the final “exit 0” line:

I placed these files in /boot so they could more easily be edited or installed from other systems in a pinch. Working locally, this does appear to require editing and compiling as root though, just FYI.

The I2S audio amplifier was enabled using the Pimoroni script mentioned in the MAX98357 guide. Again this was done on a Model B+ to easily retrieve things from the network. 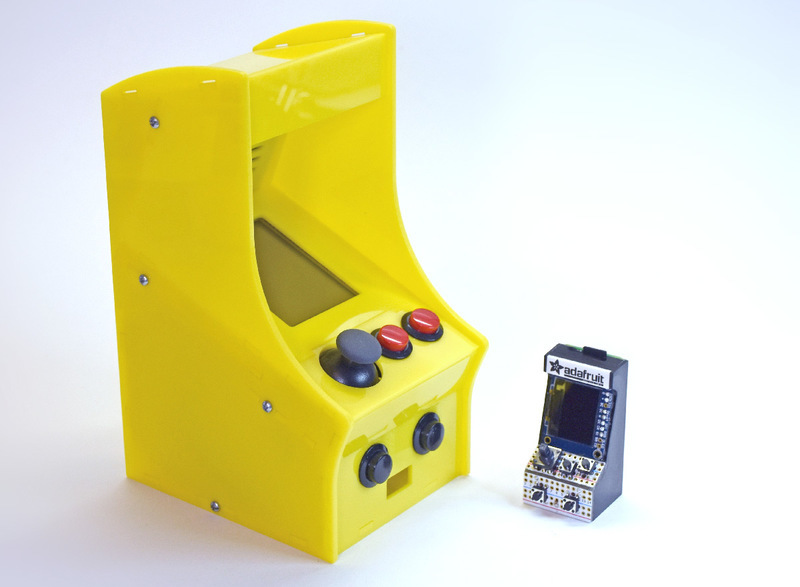 What is this, MAME for ants? Yes…it’s ant-y MAME.

So there you go, world’s smallest…this week, anyway. I’m throwing down the Gauntlet. And the Tempest, and Battlezone… 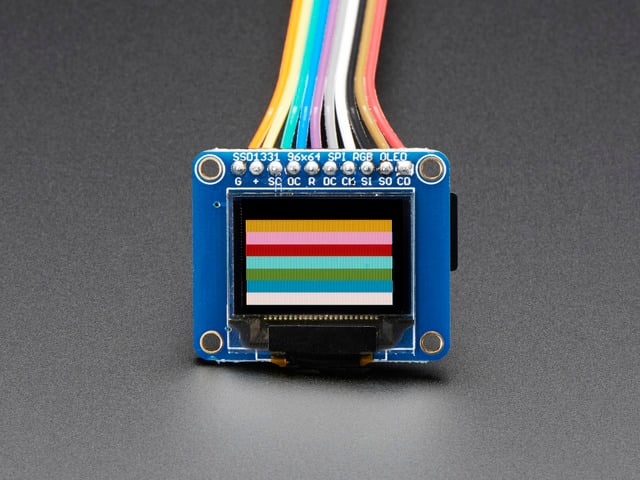 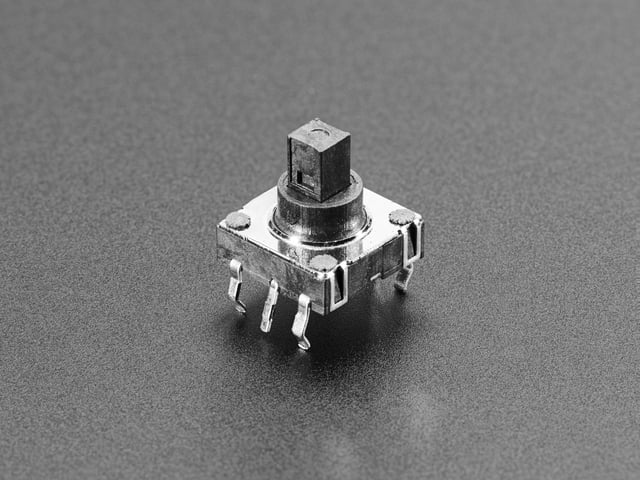