Skip to main content
What is this "Linux", anyhow? What about choosing a distribution?
Feedback? Corrections?

What about choosing a distribution?

OK now you have decided you are going to use Linux, you aren't done! Now you have to pick the flavor of Linux, also known as a Linux distribution.

We'll be using the Raspberry Pi for most examples throughout this series, and it has its own custom version of Debian GNU/Linux, called Raspbian (a portmanteau of Raspberry+Debian) which is a reliable operating system with tons of pre-packaged software available.  I recommend you start with this distribution since it is popular, easy to get started with, and well maintained, but I'll discuss other options in a moment.

First, it's helpful to know what a "distro", short for "distribution" is:  The Linux kernel bundled up and distributed with a whole bunch of other software to create a complete operating system that you can actually use.

This is kinda like how if you have a Windows or Mac computer, it comes with a basic text editor (SimpleText or WordPad), a game or two, a web browser (like Safari or Internet Explorer), and more. 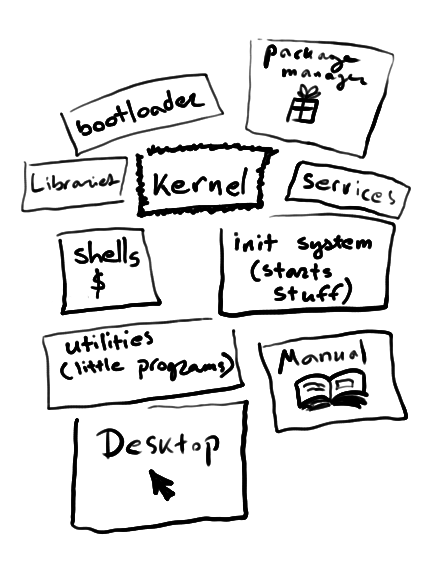 ...and so on and so forth.  It's a lot of work, assembling an operating system.

A distribution represents a set of choices about how an OS should fit together and what things it should do well. It usually comes with a system for updating itself and installing new software, and how this problem is solved is one of the defining qualities of a distribution.

There are a lot of different distributions out there. Some of them have been around for decades; others are only months old. It’s a constantly changing landscape, and it can be easy to get overwhelmed by all the options.

Choosing a distribution is often just a question of deciding what your priorities are for a project. Some place a special emphasis on including only free software, being a friendly desktop system, or security. Others are meant to run on specific kinds of computers, like small low-power devices or warehouses full of servers. There's over 100 different Linux distributions you can choose from (although not all of them may support the Pi or BBB out of the box)

Picking a distro for the Pi or BeagleBone

For little computers like the Raspberry Pi and the Beaglebone Black, distributions are available for tasks like running a media center, building an arcade game, testing the security of a school or company network, developing hardware projects, etc. etc.

In general, we suggest sticking with the default distribution that comes with or is suggested for a computer. For Pi that's going to be Raspbian, for BBB that would be Debian, for a desktop or laptop computer, Ubuntu or Debian are popular.

We'll explore some of those in depth in later articles in this series.  For now, let's...

Do you need Linux for your projects? Get you a Linux Computer

This page (What about choosing a distribution?) was last updated on May 16, 2022.