Using the Adafruit Parts in a Fritzing Design 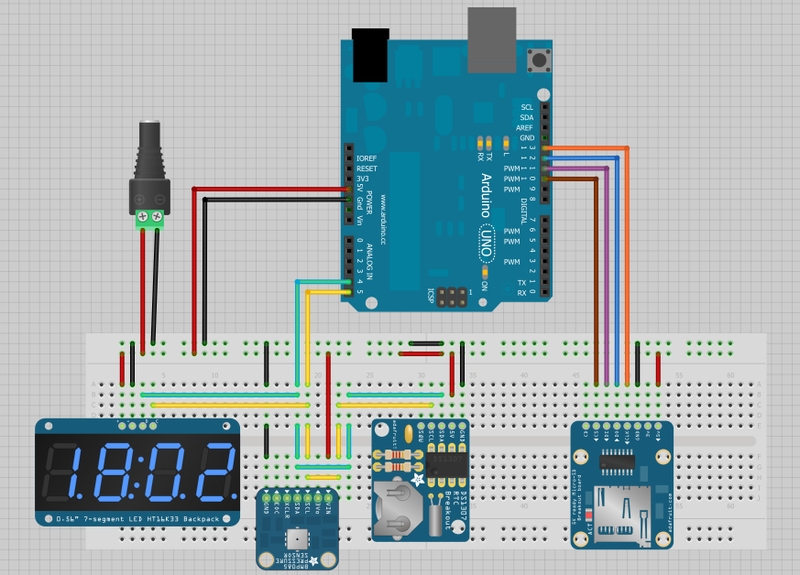 Parts in the Adafruit Fritzing Library work exactly like other Fritzing parts, and you can use them with parts from other libraries as well.

The image above shows an example circuit: a barometric logger with a 7-segment readout. It uses 5 Adafruit parts: the blue 7-segment I2C backpack, the BMP085 baro sensor, the DS1307 real-time clock, and the microSD breakout, along with the 2.1mm barrel jack to terminal block adapter. It also uses the Arduino UNO from the Arduino library.

Most of the parts in the Adafruit library are designed to plug into breadboards, just like their real-life counterparts! We've tried to make the Fritzing parts as close as possible to the real parts, so the pin layouts and physical footprints are identical. Any layout you devise in Fritzing can be translated directly to a real-world breadboard (or one of our permaproto boards)!

Fritzing is super handy for drafting up a nice, clean breadboard layout before you actually build your circuit.

Some of the parts, like the 2.1mm to term block adapter, don't plug directly into the breadboard. Just like the real adapter part, you instead connect wires to the terminal block and then you can run them wherever you like. On the bottom of the terminal block in Fritzing, you'll see two little boxes, one for each terminal. Mouse over one of these boxes and simply drag the wire to wherever you want it to go.

This page (Using the Adafruit Parts in a Fritzing Design) was last updated on Jul 07, 2022.