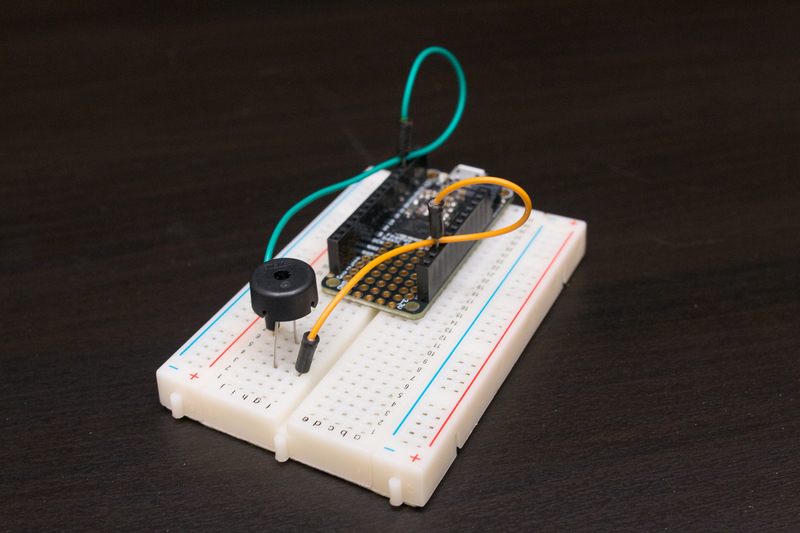 Piezo buzzers are simple devices that can generate basic beeps and tones.  They work by using a piezo crystal, a special material that changes shape when voltage is applied to it.  If the crystal pushes against a diaphragm, like a tiny speaker cone, it can generate a pressure wave which the human ear picks up as sound.  Simple change the frequency of the voltage sent to the piezo and it will start generating sounds by changing shape very quickly!

This guide will explore how to generate tones with a piezo from CircuitPython or Arduino code.

With CircuitPython, you can use simple Python code to play beeps and music notes with the piezo.  You can even use the CircuitPython REPL to make sound interactively!

In addition this guide will also show basic piezo control with Arduino code too, so you can use it for either!

To follow this guide you'll need the following parts:

To connect a piezo buzzer you just need to connect one leg of the buzzer to your board ground, and another leg to a PWM-capable or analog-out output of your board.  For the Feather M0 and other M0 boards look for a squiggly line next to a pin to denote that it supports PWM output.  For other boards check the guide or documentation to see which pins support PWM output.

Arduino uses an interrupt system for piezos, so you can use any pin.

For example here's how to wire a piezo to a Feather M0: 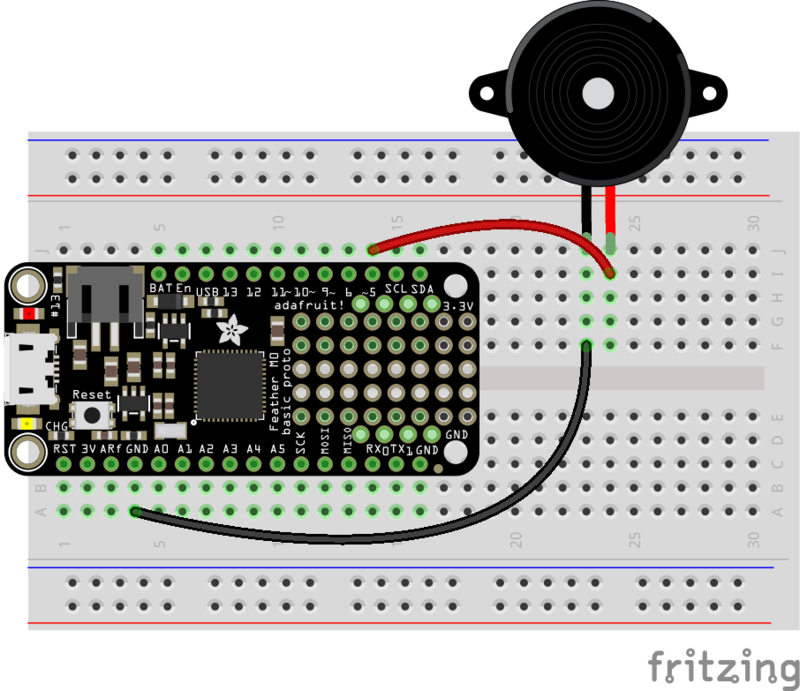 To control the piezo from CircuitPython we'll use its built in PWM, or pulse-width modulation, signal generation capabilities.  Be sure to read the CircuitPython analog I/O guide for more details on PWM signals!

Before continuing make sure your hardware is wired up as shown on the previous page.

Next make sure you are running the latest version of Adafruit CircuitPython for your board, then connect to the board's serial REPL so you are at the CircuitPython >>> prompt.

First you need to import a few modules to access the PWM output capabilities of CircuitPython:

Now you can create a PWM signal output that will drive the buzzer to make sound:

There are a couple important things happening with the line above.  This is an initializer which is creating an instance of the PWMOut class and part of that initialization process is specifying these two values:

Now we can generate tones using the PWM output.  Remember from the CircuitPython analog I/O guide PWM page a PWM signal is just a fast on/off signal, i.e. a square wave.  When a square wave modulates the movement of something, like a buzzer, it generates a pressure wave that the human ear interprets as sound.  By changing the frequency, or how often the square wave changes from high to low, you can change the frequency of the tone that you'll hear.

Changing the frequency of the PWM output is easy, just modify the frequency attribute to set a new value in hertz.  For example a 440 hz wave is the same pitch as an A4 note in music:

You might notice after setting the frequency above nothing actually happened--no sound is being made by the buzzer.  Is the buzzer broken?  Nope!  There's one more thing you need to do to create the square wave signal, you need to set the duty cycle of the PWM output.

Like the CircuitPython analog I/O PWM page mentions the duty cycle of a signal is the percent of time that it's high vs. low.  We want to generate a square wave which is high and low for exactly the same amount of time (i.e. 50% duty cycle).  This will generate a square wave of the previously specified frequency on the PWM output, and as a result induce a pressure wave from the buzzer that you'll hear as sound.

To simplify turning on and off the buzzer let's make a couple variables to represent the 0% and 50% duty cycle values that turn the buzzer off and on respectively:

Now set the buzzer duty cycle to ON to start playing the tone at the previously set frequency:

You should hear the buzzer start to play a tone at 440 hz!

To stop the tone playback change the duty cycle to OFF or 0%:

You can change the frequency at any time too, whether the buzzer is playing sound or not.  Here are some interesting frequency values to try (they're the frequencies for musical notes):

Try turning the buzzer on and changing the frequency between a few note values:

That's all there is to simple tone playback with a piezo buzzer and CircuitPython's built-in PWM output!

Here's a complete example that will play a scale of tones up and down repeatedly.  Save this as main.py on your board and be ready after saving it as the music playback will immediately start:

Another option to generate a tone is with the SimpleIO module for CircuitPython.  This module simplifies tone generation by doing all the PWM duty cycle and frequency logic for you automatically.  With a simple tone function call you can play a tone for a period of time--no setup or duty cycle calculation necessary!  You might find this approach easier to start with for basic tone playback compared to the PWM approach shown above.

You can also download the simpleio.mpy from its releases page on Github.

Before continuing make sure your board's lib folder or root filesystem has the simpleio.mpy file copied over.

Next connect to the board's serial REPL so you are at the CircuitPython >>> prompt.  Then import the board and simpleio modules:

Now you'e ready to use the tone function in SimpleIO to play a tone on a pin connected to a piezo buzzer.  Try the following to play a 440 hz tone for 1 second:

You should hear a 440 hz tone, or an A4 note, played for one second.  The parameters you pass to the tone function control the frequency and duration of the tone:

Another example is playing a 400 hz tone for 3 seconds:

Notice how the frequency and duration parameters changed to specify these different values!

That's all there is to basic tone playback on a piezo with the SimpleIO module!  Here's another complete example that plays a scale of notes using SimpleIO's tone function.  Again save this as a main.py on your board to have it run:

You can also control a piezo buzzer from Arduino in a similar way as CircuitPython with Arduino's tone function.  There are actually quite a few resources and guides for using Arduino to play tones on a piezo, so this page will just highlight how to use a servo in Arduino in the same way as with CircuitPython from the previous page.  For more exploration of piezo and Arduino be sure to check out the entire Arduino Lesson 10: Making Sounds.

First make sure your piezo is wired to your board exactly as shown on the hardware page of this guide.  You'll also need the Arduino IDE installed and configured to upload to your board.  Remember Arduino sketches have to be written entirely up front and uploaded to the board--you can't interactively control servos like you can with CircuitPython.

With Arduino you use the tone function to play a 50% duty cycle (i.e. square wave) on any digital output.  The function needs to be told the pin and frequency of the tone as one of the parameters and will immediately start playback of the tone/signal.  To stop playback you just call the noTone function (providing only the pin).

Here's a complete Arduino sketch that uses the tone function to play a scale of notes just like the CircuitPython example on the previous page.  Upload this to your board:

After uploading you should hear the piezo play back each tone in sequence up and down.  That's all there is to using a piezo buzzer with Arduino to play tones!