This guide will show you how to build a smart measuring cup which displays the volume of liquid in real time on a web page. No longer will you need to squint and guess while measuring liquids; the smart measuring cup's web page clearly shows the measured volume, and even converts between units or tares measurements like a digital scale!

The brains behind the smart measuring cup are an Arduino Yun and an eTape liquid level sensor. The Yun is the perfect platform for this project because it can read sensor data with it's ATmega microcontroller, and serve a web application (written in python and Flask) using it's Linux-based processor. By following this guide you can even learn how to send sensor data to a web page for your own projects.

The assembly of the hardware is very simple because the eTape liquid sensor is a resistive sensor, just like a photocell. Attach one of the middle two leads to ground on the Arduino. Attach the other middle lead to an analog input such as analog 0 on the Arduino. Finally attach the 560 ohm resistor that comes with the sensor between the analog 0 and 5 volt pins on the Arduino.

The outer two pins on the sensor will be unused (they're for temperature compensation in a bridge configuration).

You can see a diagram and photo of the wiring below: 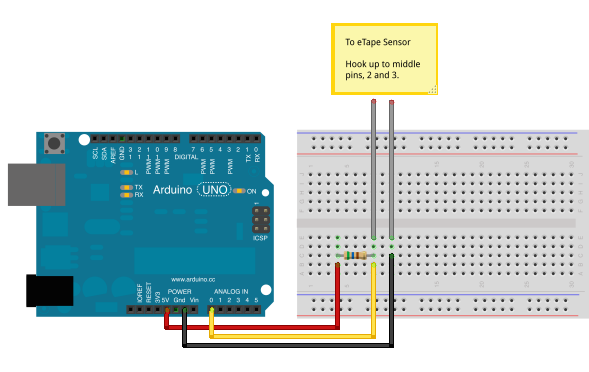 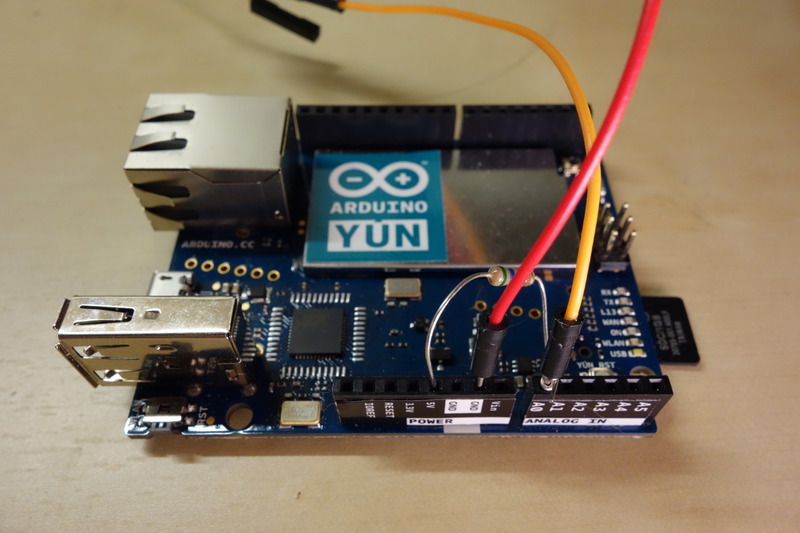 Below you can see how I attached the sensor to a graduated cylinder with a binder clip. This clip works well as a temporary means of affixing the sensor. For something more permanent consider taping or gluing the top of the sensor to the container (remember only glue or tape the sensor above the MAX line!). Use a food safe adhesive such as silicone sealant if necessary.

You can also see I bent the wires in a tall loop and taped them onto the back of the cylinder as a strain relief. 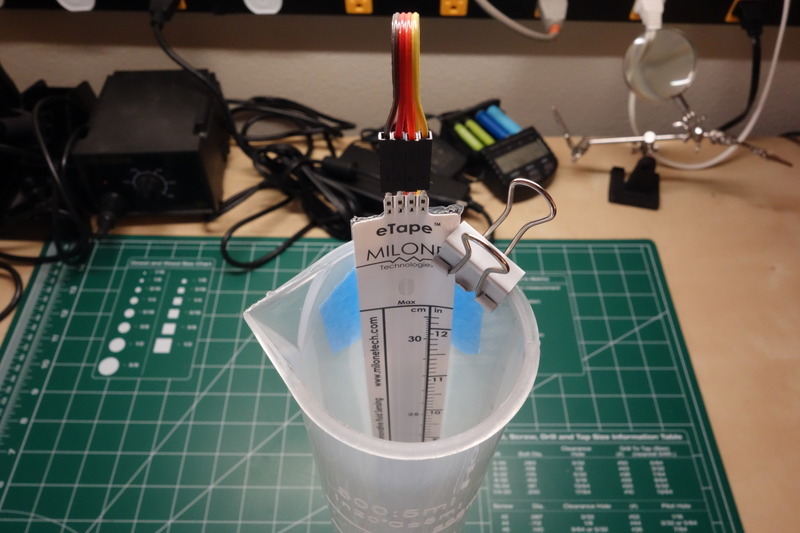 In this step the Arduino sketch will be calibrated to report the volume of measured liquid. To get started, download the software for this project from the following link:

Download Software
Unzip the archive and load the LiquidSensor sketch in Arduino. This sketch will read the raw sensor resistance and help you calibrate for volume measurements.

The resistance value is the measured resistance of the liquid sensor. With no liquid touching the sensor it should read a value around 1500-2000 ohms (depending on the length of the sensor).

Try pressing the sensor in various locations to see how the resistance changes. If you touch near the top of the sensor at the MAX line you should see a resistance around 200-400 ohms.

To calibrate the sensor for measuring volume, you will need to measure the following:
For example I saw my sensor output a resistance of about 1963.7 ohms when no liquid was touching it. Then I filled the graduated cylinder with 500ml of water and saw the resistance was 512.81 ohms.

Once you've determined the above calibration values, update the #defines at the top of the sketch appropriately:
Save the sketch and upload again. Now you should see a calculated volume value output every second. Try filling the container with various levels of liquid to see how the calculated volume changes.

If you're not using an Arduino Yun, the software setup is done and you're now able to read the volume of liquid in the container. Consider adding a display, like this small OLED, to show the measured volume!

If you're using the Yun, continue on to learn about how to setup the Yun to display volume data on a web page.

In this step you'll setup an Arduino Yun to display the measured volume on a web page that updates in real time.

Before you get started you will want to have your Yun connected to your wireless network, and be familiar with connecting to the Yun over SSH. Check out the following links for more information on these topics:

Load the YunSmartMeasuringCupSketch in Arduino and update the #define values at the top just like you did for the LiquidSensor sketch. Make sure to copy in the calibration values you determined from the previous step. Upload the sketch to the Yun.

Once the sketch is running it will wait for an internal connection on port 5678 of the Yun's Linux-based processor. When a client connects to this port, the Yun will start sending volume measurements continuously (about 5 times a second) over the connection. You can SSH to the Yun and execute the telnet localhost 5678 command to see this behavior for yourself (press Ctrl-C to quit telnet).

In this step you will setup the Flask web application framework as a server on the Arduino Yun. Flask is a simple python framework for running web applications. The web page for this guide is written using Flask because of its support for streaming data through HTML5 server sent events. Don't worry if you aren't familiar with Flask or web development, you can still follow the steps below to setup the server and web page.

First make sure the SD card is connected to the Yun, then connect to the Yun using SSH. Once connected execute the following commands to install pip, a python package manager:

Now copy the YunSmartMeasuringCupServer folder from the software download onto the SD card of the Yun. You can use a file manager like Cyberduck to transfer files to the Yun, or if on Mac or Linux execute a command like:

Note that the above command should be executed on your computer and from the directory where the software was unzipped. The command also assumes the Yun is using the default name 'arduino'.

To start the server, in an SSH session with the Yun execute the following:

You should see a message such as the following which indicates Flask is now listening on port 5000:
* Running on http://0.0.0.0:5000/
* Restarting with reloader

If you see an error or other failure, carefully check that all the above steps were followed.

With the server running, open a web browser to http://arduino.local:5000/ (or change the arduino.local to the appropriate name of your Yun). If you're running from a device without mDNS support (like Android or Windows), replace arduino.local with the IP address of the Yun.

Once the web page loads you should see it connect to the server and start displaying volume measurements. Try adding liquid to the container to see the measurement update in real time! Note that only one person can be connected to the server at a time.

When you're done running the server, on the Yun SSH connection that started the server press Ctrl-C to stop Flask.

If you want the server to run automatically on boot, edit the /etc/rc.local file on the Yun and add this line:

This project is an example of how to use an eTape liquid level sensor to build a smart web-enabled measuring cup. You can use the code from this guide to help get any sensor data onto a web page using an Arduino Yun.

Some interesting ways you might extend this project include:
What can you think of to do with a liquid sensor and Arduino Yun? 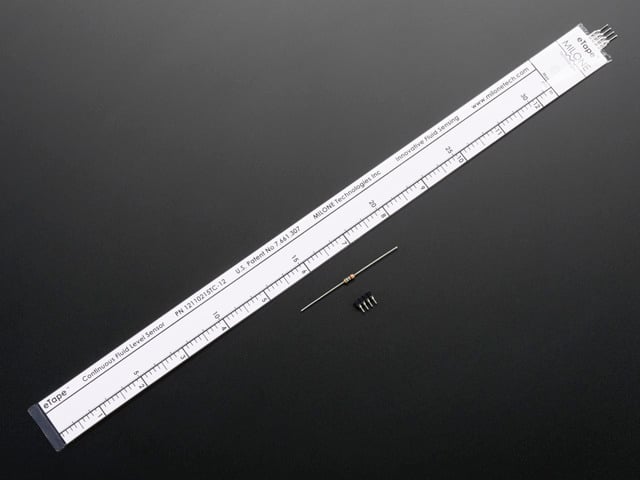 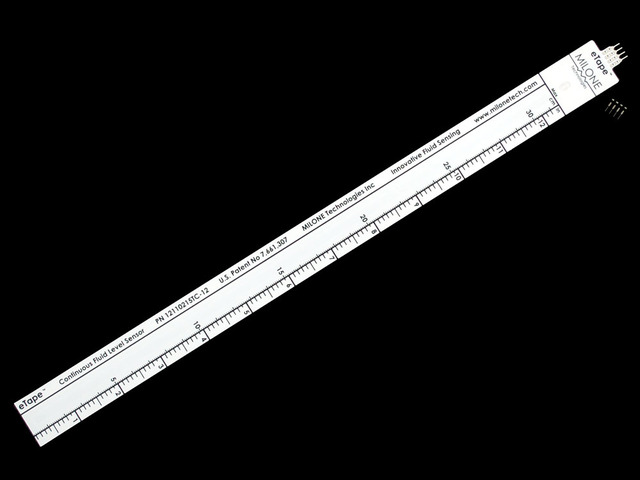 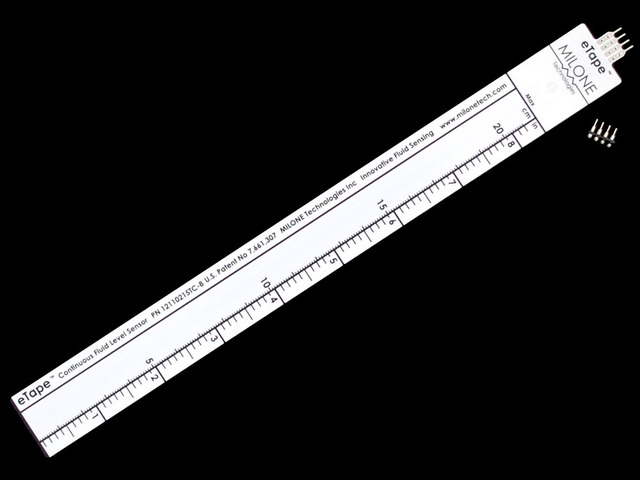