Let's look at the code!

Next we set up the microphone object and our samples variable. Then we initialise the mic object so it's ready when we are.

Then we use the mic object to start taking sound samples. We use our normalised rms to find the average of a given set of samples, and we call that the magnitude. Last, we print the magnitude to the serial console.

Note that the Mu plotter looks for tuple values to print. Tuples in Python come in parentheses () with comma separators. If you have two values, a tuple would look like (1.0, 3.14) Since we have only one value, we need to have it print out like (1.0,) note the parentheses around the number, and the comma after the number. Thus the extra parentheses and comma in print(((magnitude),)).

Once you have everything setup and running, try speaking towards the Circuit Playground Express, and watch the plotter immediately react! Move further away from the board to cause smaller changes in the plotter line. Move closer to the board to see bigger spikes!

It's a really easy way to test your microphone and see how it reads sound changes on the Circuit Playground Express! 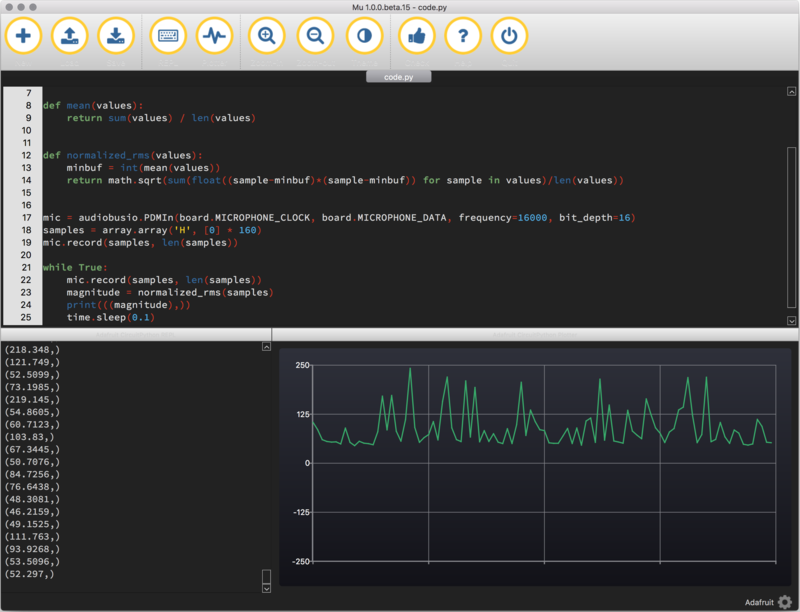 Using Servos With CircuitPython and Arduino
By Tony DiCola
28
Beginner