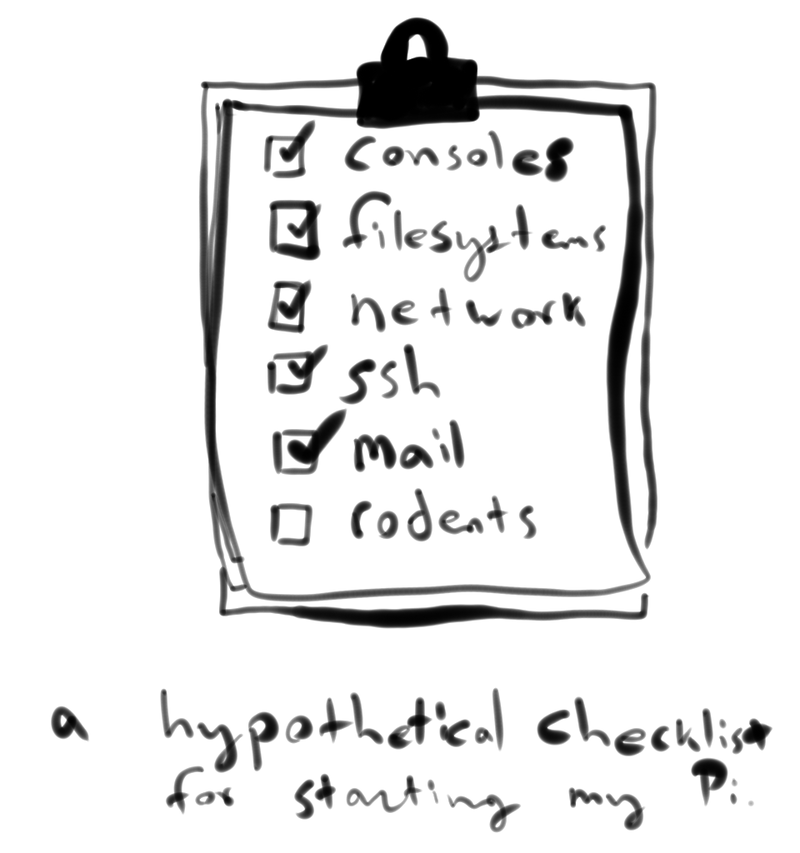 My goal is to have the init system start a script called mouse.py every time the Pi boots to multi-user mode (which hopefully will also mean that the network is available).

If you're following along at home, there's a good chance you don't want to mess around with my entire mouse logging project right now, so I'll write a quick Python script for testing purposes (based on this StackOverflow answer by Nathan Jhaveri).

You can paste or type the code into ~/mouse.py using Nano and mark it executable:

All this does is create a very simple web server that, when you visit the Raspberry Pi's network address, returns an ASCII mouse. To test, I'll check my Pi's IP address, start the script, and use curl to make sure it's running. (I'm using tmux to open more than one shell.)

Your IP address will likely be different, but in my case this looks like so:

If  you're not on a network, you can just use localhost instead:

And if you want to test in a web browser, just enter the Pi's address in the URL bar: 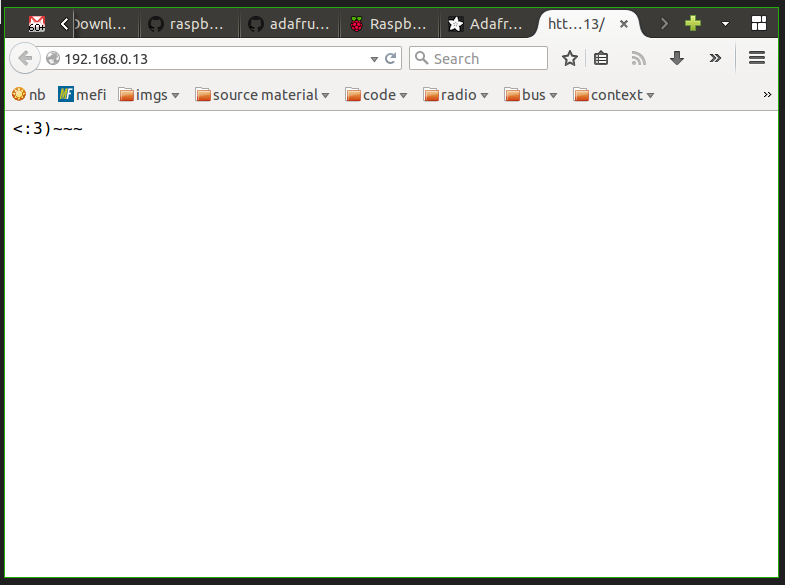 Now that we have an example service, let's talk about how to start it.

The core idea of sysvinit is something called runlevels, which are essentially just a way of organizing a collection of init scripts which have to run when the system starts or shuts down. Each runlevel corresponds to a directory in /etc/, which in turn contains symlinks to scripts in /etc/init.d/.

For historical reasons, there are a lot of runlevels, but a bunch of them aren't really used for anything special on Debian systems. You can read the full details of this in the Debian manual, but the short version is that the system normally boots to runlevel 2, which is multi-user mode. Adapted from the manual, here's a partial table of levels:

ls -l gives a long listing of files, which will helpfully show you if a file is really a link to another file. Again, all of the actual init scripts turn out to live in /etc/init.d.

Init scripts usually accept (most of) the following command-line parameters:

So, for example, you could say /etc/init.d/ssh restart to stop and start the SSH service. You often see commands like this in tutorials and HOWTOs.

As an example, load up /etc/init.d/ssh in a text editor and give it a look.

This is actually quite a few lines of code for what seems like a pretty simple task - it just needs to start or stop a program, right? It turns out, though, that there can be a lot of considerations involved in doing that. For example, these rather squirrelly-looking lines...

...make sure that sshd exists, is executable, and at least claims to be the SSH daemon provided by the OpenSSH project. The rest of the script defines functions for all sorts of housekeeping and sanity checks before it gets to the part where it handles the start/stop/etc. commands in a case statement:

For one-off projects on the Pi, you almost certainly don't need to exercise this level of caution, but you will want to handle the common commands.

It would be a pain to write a lot of this stuff out from scratch. Fortunately, we have /etc/init.d/skeleton to work with. This just provides the "bones" of an init script, and should work with a few minor changes. Next, we'll look at adapting it to run our example mouse.py.

Start by copying /etc/init.d/skeleton to /etc/init.d/mouselogger, and marking it executable:

We need the sudo here because (like most things in /etc) files in /etc/init.d are owned by root. (You can imagine what might happen on a system with lots of users if just anyone could muck around in the startup files.)

Next, open this up in Nano:

I had to change three things. First, the metadata between BEGIN INIT INFO and END INIT INFO to specifically reference a service called "mouselogger" and provide a description:

Second, the environment variables that the rest of the script uses to do its business. I added /home/pi to the path, changed the description to "Mouse logger.", and changed the name to mouse.py, as well as emptying the DAEMON_ARGS variable:

And lastly, I added --background and --make-pidfile to the start-stop-daemon options in the do_start() function:

This ensures that the script is sent to the background instead of running in the foreground after it starts, and creates a file in /var/run that contains the process ID of the script.

Here's a copy of the entire file.

Test the Script and Install with update-rc.d

You should now be able to run /etc/init.d/mouselogger - but first, make sure that /home/pi/mouse.py isn't already running.  If you have it open in a terminal, you can type Ctrl-c to kill the process. Otherwise, use ps aux | grep mouse.py to see if it has a running process:

Here, I checked with ps and found a copy of the Python interpreter running mouse.py, so I killed the corresponding process with sudo kill 2052. (2052 is the process id in the second column of the output from ps.)

Now you can try starting and stopping the service and testing it out:

Once you're confident that the init script works, you can install it in the default runlevels so that it starts at boot time:

And now, the moment of truth! Reboot and see what happens...

This part might take a bit, but once you can log back in, it should be simple to test whether mouse.py is running:

Next up, we'll look at doing the equivalent thing with systemd on a BeagleBone Black.

systemd: Writing and Enabling a Service

We have a whole category of BeagleBone tutorials. I found the specific image I installed on the elinux BeagleBoneBlack Debian page. Recent editions of the BeagleBone likely come with something very similar installed.

This section assumes that you are logged into your BBB as root.

systemd takes a very different approach from the sysvinit scheme of organizing init scripts into directories by runlevel. Instead, it uses unit files to describe services that should run, along with other elements of the system configuration. These are organized into named targets, like multi-user.target and graphical.target. 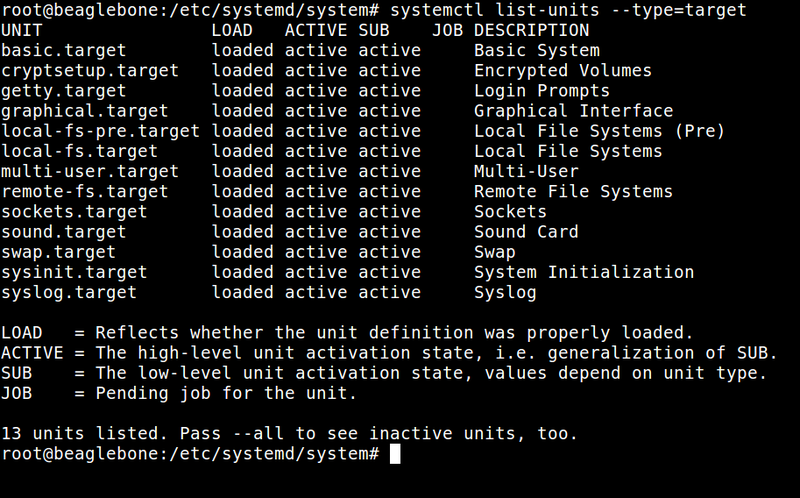 Just running systemctl by itself will show you a list of all active units, including configuration for devices, services, filesystem mountpoints, timers, and sockets. 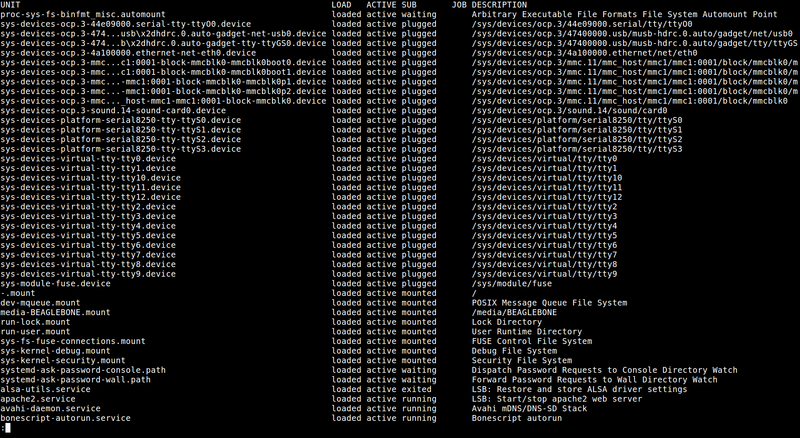 Mostly, systemd units are defined in various files in directories like /lib/systemd/system.

If you want to know the status of an existing service, you can use something like systemctl status foo.service - for example, let's check up on SSH:

You might notice something a bit odd here - this status report still mentions /etc/init.d/ssh. Isn't that a sysvinit thing? Well, yeah. What is happening is that the system we're on is still a hybrid between old-school and new-school init systems. systemd itself is actually capable of acting as a replacement (mostly) for sysvinit.

This all looks a little daunting, and there are a lot of concepts to untangle if you want to understand everything that's going on (your humble narrator is still quite a ways from this), but just configuring a new service is very little work.

Let's reuse our example service, mouse.py. Run sudo nano /root/mouse.py, and paste the following code (notice that I've changed the port from 80 to 8888, so as not to step on the toes of other services already running on the BeagleBone):

Then make sure this is executable with sudo chmod +x /root/mouse.py. Next, create /lib/systemd/system/mouselogger.service and use Nano to paste the following:

Now you can enable your new service:

Sure enough! As a last step, you should probably reboot and repeat this test to make sure.

A gentle introduction to the world's most popular free OS.
Brennen Bearnes
What is this "Linux", anyhow?
82
Beginner

A look at wildcards, aliases, custom scripts, and other force multipliers in the shell.
Brennen Bearnes
An Illustrated Guide to Shell Magic: Typing Less &...
31
Beginner

Use Vagrant to quickly spin up a virtual Linux systems on your Windows PC.
Brennen Bearnes
A Quick Linux VM on Windows with Vagrant
6
Beginner

A quick and easy path to a virtual machine running GNU/Linux in the cloud.
Brennen Bearnes
A DigitalOcean droplet in 10 minutes
5
Beginner
×