Sometimes the PiTFT device tree and related kernel package don’t work across different OS releases, so we’ve experimented with an alternate approach that doesn’t rely on a custom kernel — it instead works in “user space.” So far it’s worked well regardless of the OS version being used!

There are tradeoffs. The code is still in a rough state with many features yet to be implemented, and also the performance is slightly less than the kernel approach. It’s typically adequate though, even for game emulation (RetroPie, etc.), so give it a try if you’ve had trouble with the “classic” approach.

This currently requires a bit of Linux-y knowledge, editing files and such…

PiTFT displays use SPI to communicate, so make sure that’s enabled using the raspi-config utility:

Menu options move around from time to time…at the time of this writing, SPI is under “Interfacing Options.”

Then retrieve the software using wget…

And then a quick test…

The PiTFT should mirror the contents of the Raspberry Pi’s HDMI output at this point. Text and everything will be microscopic, but we’re just checking that the program runs. If not, confirm that the file /dev/spidev0.0 exists — this should happen when SPI is enabled. Double-check raspi-config and it never hurts to reboot.

Does it run? Good. Press control+c to kill the program, and we’ll set it up to run automatically on boot.

Then edit the file /etc/rc.local as root (you can substitute your editor of preference for nano):

Just above the final “exit 0” line, insert the following line:

The screen looks best if the HDMI resolution exactly matches the PiTFT resolution, so the final step is to configure the system for 320x240 video:

Append the following lines to the bottom of the file:

OPTIONAL: you can also use “640 480” in place of “320 240” above. This is exactly twice the PiTFT native resolution, and the tftcp utility will perform a smooth 2:1 filtering of the image. Any larger though and the image isn’t as sharp (and text becomes tiny, like when we first tested it).

Now reboot and the PiTFT should activate toward the end of the boot process.

This is even more experimental than the tftcp utility…it only works with the resistive screen, and there’s no calibration support yet, but if you’d like to try it out…

“cd” to the same directory where the software was downloaded earlier, and try it out…

Whether you’re in X11 or in text console mode (e.g. Raspbian Lite), the cursor should move in response to touch, which is emulating a mouse.

If that seems OK, press control+c to stop it and we’ll use the same steps to make it auto-run on boot:

Insert this line just above the “exit 0” at the end of the file:

reboot and both PiTFT and touch should be active now. 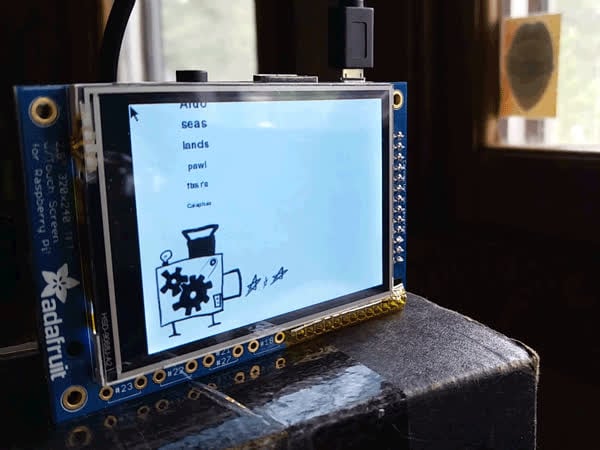