If you’ve used RetroPie in the past, check if a newer release is available…it’s updated frequently! This guide requires version 3.6 or newer.

While that downloads, you can get started with formatting a 4GB or larger microSD card (or full-size SD if using a “classic” Model A or B).

After downloading and uncompressing the RetroPie image, you can write it to the SD card as you would any other operating system. It’s explained in this guide.

Use the latest RetroPie image (3.6 or newer) optimized for your board type (Raspberry Pi 1 or 2/3).

Insert the SD card in the Raspberry Pi. Plug in an HDMI monitor, USB keyboard, then connect power. 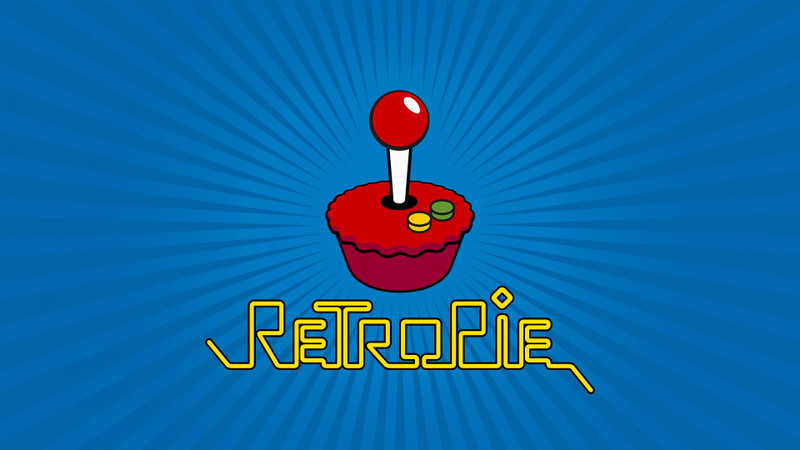 You do not need to configure inputs yet…instead, press F4 to exit EmulationStation and get a Linux prompt. Then we’ll do some basic system configuration…

The following raspi-config options are required:

These steps are optional but recommended:

When you’re done, tab to “finish” and reboot when prompted.

After rebooting, the system will once again ask you to configure an input device. Let’s set it up for keyboard input for now (we can change this later). Hold down any key on the keyboard for a few seconds until it starts asking for keys to assign to certain controls.

There are a HUGE number of inputs (shoulder buttons, dual analog sticks, etc.)…but for any you don’t anticipate using you can just hold a key down for a few seconds and it will skip ahead to the next option. As an 80’s kid, I spend most of my time in MAME, so I configure EmulationStation’s input to be fairly minimal (but your emulator of preference might be different):

Remember — once configured, EmulationStation is navigated using these keys only. So, for example, the Return key won’t necessarily select an item, even though the same key may have the expected effect within some emulators.

You can set set up a more extensive combination of inputs for different emulators later…no need to get serious with the gameplay yet, just confirm that things launch as expected. Most emulators will exit and return to the EmulationStation menu with the Escape key.

Later, you can reconfigure it for a gamepad…you’ll need to access the EmulationStation settings menu with a keyboard still attached. Press the key you’d configured as “Start,” then select “Configure Input,” then proceed through each control as you did before with the keyboard, but using the gamepad now.

The control settings you select here don’t always carry through to some emulators. Others may have their own settings that overlap the keys you’ve chosen, causing mayhem. See the “Configuring Individual Emulators” section for tips on finding each emulator’s individual config file, so you can fine-tune these aspects.

If you don’t plan to use networking, skip ahead to the next section below: Install ROMs. You’ll need to use a USB flash drive and move files manually from the command-line.

Loading ROM files is most easily done on a wired Ethernet network. Recent RetroPie releases already have file sharing enabled; the system should appear on your network as “retropie.local” (unless you gave the system a different hostname during the initial setup).

If you plan to use wireless networking…the RetroPie menu includes an option for configuring WiFi, but I couldn’t get this to connect. If you have trouble with it, press F4 to exit EmulationStation for a command-line prompt and set up WiFi the old-fashioned way, by editing /etc/wpa_supplicant/wpa_supplicant.conf. Here’s a guide for basic network setup on Pi.

Once networking is all set up (it may require another reboot), you should be able to access the RetroPie system remotely…as a network share for transferring files, and (if you enabled SSH in raspi-config) for remote login to finish certain command-line tasks later.

You can always exit EmulationStation with the F4 key for a command line prompt, but remote login has the benefit that you can copy-and-paste some of the commands we’ll be using. 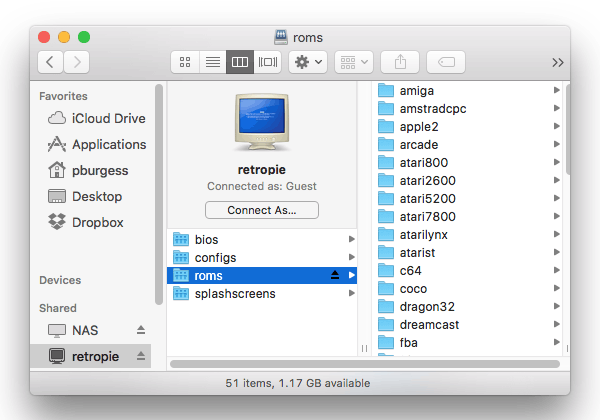 Networking must be configured and operable before proceeding.

Emulators require ROM files. If you don’t want to do this step, that’s okay…a few self-contained games can be installed in the “Ports” section of EmulationStation, such as Doom and Quake (explained in next section below).

With networking enabled, it’s possible to copy the ROM files across the network — the retropie system should be visible as an SMB or AFP share. Alternately, you can fill a USB stick with ROM files, mount this on the Raspberry Pi and move them to the appropriate locations.

ROM files are installed in specific subdirectories of /home/pi/RetroPie/roms — one for each different emulator package. For example, NES roms go in the “nes” directory.

Some systems are supported by multiple emulators (for example, there are different MAME implementations, each with its own directory). Each emulator has its own quirks — some may render or perform better than others, or some might not work with certain ROMs. Hunting down these quirks and determining your preference for one emulator over another is a process you’ll have to work through yourself…there are just too many emulators and far too many ROMs for us to know them all. There are entire sites and forums devoted to the various emulators, and you may need to Google around and do your own research on the best selections for different games. The RetroPie web site and EmulationStation web site are great places to start to start, with forums, FAQs and wikis.

Version 4 (and later) of RetroPie does not include games like Doom and Quake by default. If you’re patient and reasonably tech savvy, you can add these on after the fact…

An emulated system won’t show up in the EmulationStation menu until corresponding ROMs are installed…but it only scans for ROMs at startup. It’s easiest just to reboot…or you can exit to the command line (F4) and type “emulationstation” to restart the menu.

If you haven’t already configured the keyboard or a gamepad for input, do that now. Hold down a key or button and proceed through each button when prompted.

Add a compact 320x240 resolution screen to the top of your Pi
lady ada
Adafruit PiTFT - 2.8" Touchscreen Display for...
112
Beginner
An exploration of network communication from the shell using Pygame and the PiTFT.
Brennen Bearnes
RasPipe: A Raspberry Pi Pipeline Viewer, Part 2
18
Beginner

How to run a Processing sketch on the Pi & PiTFT display.
Tony DiCola
Processing on the Raspberry Pi & PiTFT
14
Intermediate
×