Out of curiosity I decided to cut open one of the bulbs to see if there were more details on what BLE board is being used inside the bulb.  From what was found earlier while exploring the bulb's GATT I expect a Texas Instruments CC2540 chip is inside the bulb.

I cut through the plastic diffuser around the bulb with a Dremel and saw a little circuit board with the LEDs: 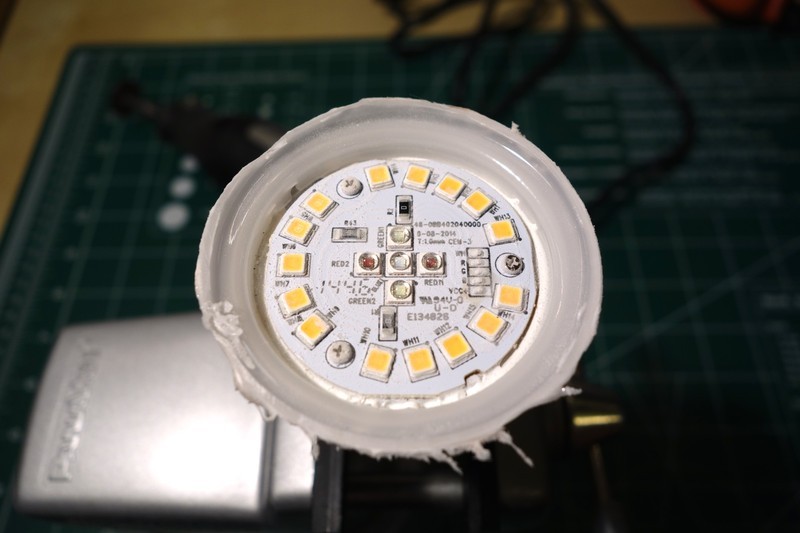 It's interesting to see a ring of white LEDs (soft white actually, somewhere around 3500K I would guess) around the perimeter of the board.  In the middle are the colored LEDs, with two green, two red, and one blue LED.  Presumably when the bulb shows pure white it turns on the outer white LEDs to have a more pleasing color as the red, green, and blue LEDs would be colder and less pleasant for indoor lighting.

Also interesting is the inclusion of only one blue LED vs. two of the other primary color LEDs.  I suspect only one blue LED is necessary because humans perceive the color blue with more intensity than other colors.  This is why blue LEDs on electronic gadets are so bright and annoying in a dark room!

Going further I unscrewed the board from the bulb and pried it off with a screwdriver.  It turns there's a row of headers that are soldered to the board, but the solder snapped off with a bit of force.

Once unscrewed the top of the bulb base lifts off to reveal: 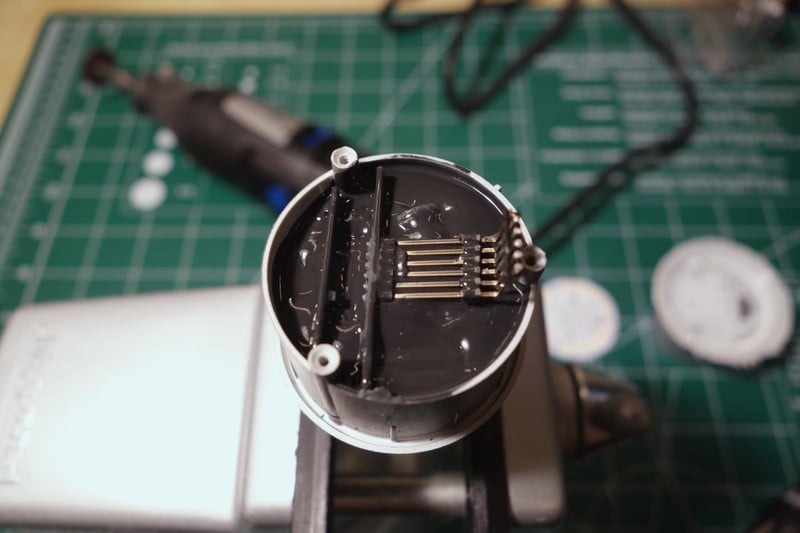 Solid silicone gunk, yuck!  The edges of a couple circuit boards are visible poking out near the left side, but unfortunately the silicone makes it impossible to get to the boards easily.  Removing the silicone could get quite messy so this is as far as the bulb diassembly will go.

Overall for the price these 'Colorific!' smart light bulbs are quite interesting.  From what I found during the reverse engineering it looks like they're probably using a common TI CC2540 BLE SoC and perhaps even based the bulb's code on some of TI's examples like a proximity alert sensor.  If you're looking for an inexpensive light bulb that you can control yourself, check out these bulbs!

Getting Started with Bluetooth Low Energy by KTOWN
$39.95
Add to Cart