A Brief History of One Time Pads

The Vernam Cipher, or one-time pad, is a cipher that was first invented by Frank Miller in 1882, then later re-invented and patented by Gilbert Vernam in 1919. 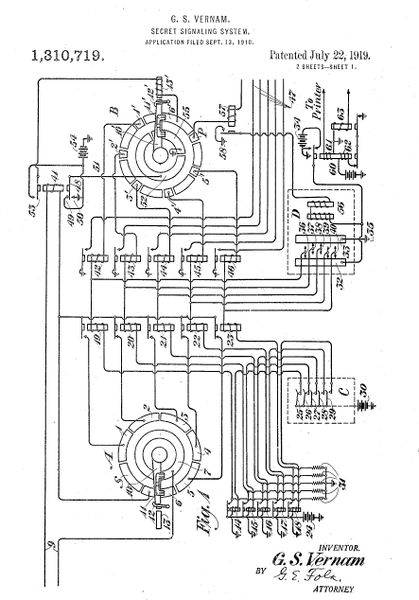 Each character of the message you wish to send (the "plaintext") is combined with one character from the pad (the "key") to produce one character of the coded message (the "ciphertext"). The cipher must also meet the following two conditions:
Assuming those conditions are met, the Vernam Cipher is the only known cipher which enjoys Shannon Security... which means that no amount of computing power could brute force its way in and crack the code.

Perfect secrecy! Sound too good to be true? Well... it kind of is. There is a catch that makes this cipher very, very hard to perform in real life. Several, actually, some of which were exploited by this lady:

Her name was Gene Grabeel, and she was a Virginia schoolteacher before she went to work for the Army Signals Intelligence Service (the precursor to the NSA). Within weeks she had started the program that broke the codes which protected Soviet diplomatic messages.

But that's enough history for now, let's learn how to encrypt and decrypt using a one time pad...