Node-Red in its simplest form is an open source visual editor for wiring the internet of things produced by IBM. What does this mean? Well for someone lazy like me it means I can spend more time making stuff "talk" to each other than worrying about all of the interfacing code I will need to write.

The system contains "Nodes" which look simply to be icons that you drag and drop on to the canvas and wire together. Each Node offers different functionality which can range from a simple debug node to be able to see what's going on in your flow, through to a Raspberry Pi node which allows you to read and write to the GPIO pins of your Pi.

To give an example of what can be done here is my home twitter account telling me where I'm currently located and whether it is going to rain any time soon. I even have a Google maps link thrown in for good measure.

The flow to produce something like this within Node-Red is shown below and it took me literally 15 minutes to have everything set up.

To summarise the flow:

Normally this would have taken me a good few hours to complete. But with Node-Red I am able to do it in minutes. I am not worrying about all of the interfacing to MQTT, HTTP or Twitters API. All of that is done for me by Node-Red.

So now I've sold you the idea.. lets get to the installation!

Firstly open up a secure shell into your Pi or open up a console session if you are working directly from the Pi.

We then need to get ourselves a working copy of Node.js. Node.js is a an event driven server side javascript environment. It is essentially the foundation that Node-Red will run on.

For the Pi it has been a pain in the past to get Node.js running but luckily there have been some tweaks made by the clever people out there that make our lives easier.

So go ahead and run the following commands in your terminal window, which will ensure our Pi is up to date and ready to go.

Now that we have node we can then jump in to downloading Node-Red. There is a tutorial on their git for the Pi which can be found here. But as always I want to take a different route as I want to use git to ensure that we always stay up to date with any new commits to the node-red repository.

We will now install Git. This allows us to clone git hub repositories. If you have never heard of git hub it is definitely something you should look into. In essence though it is a good way of adding some version control and open source collaboration to your projects.

So next you need to navigate to your Pi’s IP address and port to see Node-Red in all of its glory.

Download File
Copy Code
You should be welcomed to a blank canvas with all of the “nodes” available on the left hand of the screen. You can drag and drop these to start wiring things together. We will next be discussing how to create your first "flow" using these nodes.

Node-Red is great out of the box but it can be a bit manual to start, stop and run on boot. The following section will describe a simple init script to do all of the hard work for us.

Firstly we create a new init.d file, which is essentially a script for starting, stopping and restarting services under Linux.

Download File
Copy Code
Then copy and paste the following code in to the file. To do this within nano copy the text below and right click in the nano window you should see the text start to appear.

The only thing you may need to change before saving is the directory where node-red is installed on your Pi. If you have been following this guide all the way through you do not need to change anything.

Before delving into the more advanced ways of using Node-Red it's worth understanding the fundamentals of how the systems works. I will now explain a simple "Hello World" setup using an inject node and a debug node.
Firstly open up your instance of Node-Red and locate the inject node. If you hover over any of the nodes a brief description will be given explaining its functionality.

Click and drag the inject node anywhere on to the white canvas in the centre of the screen.

Next we find our debug node which is listed under the "outputs" section. Debug nodes are great for seeing what is happening within your flows and also can be used to read the outputs coming from sensors, GPIO pins and website fetches. 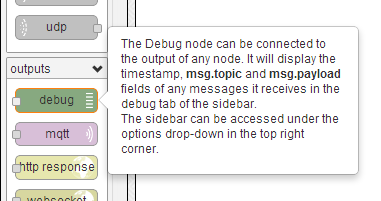 Drag the debug node on to the canvas near to your input node.

As you begin to drag you are creating a "wire" between the two nodes. This is allowing them to pass content and interact with each other. Once completed the wire turns grey to show it is in place.
It is worth noting that you can have multiple wires going in to a node. As an example you can have multiple flows all going in to a debug node. We don't need lots of debugs we can just re-use the same one.

As soon as you change the canvas by adding in new nodes or adding/removing wires between nodes you will notice that the "Deploy" button at the top right of the canvas illuminates red. This shows that there are un-deployed changes.

Deploying simply means allowing the system to update so that it is ready to execute the code within your nodes.

Click the Deploy button and you will see an alert stating that the deployment has been successful.

Once the deploy has completed click the debug tab directly below it. This is our debug window that will allow us to see any messages entering into the debug node.

We can now check the wiring is working OK by going to our inject node and clicking on the tab that pokes out on the left hand side.

As soon as you click this tab you are telling the node to execute manually due to our intervention. Check the debug window and you will see a bunch of numbers which is actually the current time in milliseconds since 1970.

I promised though a Hello World example so double click on the body of the inject node which is highlighted in orange as shown below.

This opens up the nodes options panel. You can do this for any node to see further settings and to make changes.

I want our inject node to output the text Hello World every 3 seconds. In order to do this simply set your options as I have below.

The inject node is very versatile and you can schedule it to inject at various times of day which is really useful. I use it to automate fetching the weather to my twitter account just before I wake to go to work. 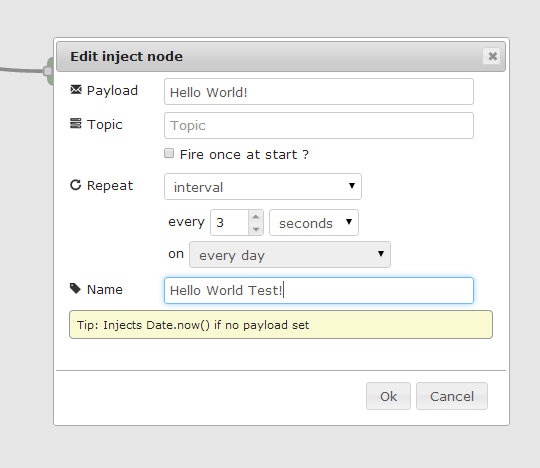 Once you have everything setup just click OK and the Deploy button at the top right of the screen. You should then start to see the Hello World text output to the debug window every three seconds.

I have explained quite a few fundamentals during this stage of the tutorial but the exact same process can be used with the other nodes. You simply drag and drop them on to the canvas, wire them together, change their settings and deploy.

The next stage of the tutorial will move in to making more nodes available and ensuring the environment is set up to run them.There are nodes such as the twitter node that require some further dependencies to be setup other than the ones discussed so far.

Node-Red comes with an excellent set of basic nodes within its palette however there are more out there and there is certainly nothing stopping you from writing your own!

Some of the nodes also have dependencies on external libraries and without these being installed will not function correctly. As an example for the twitter node to work correctly you need OAuth which allows you to authenticate with twitter.com to be able to send/receive tweets.

You may remember from the initial starting of node red we saw a list of these missing dependencies as shown below.
Download File
Copy Code
You may have more in your list as I have installed quite a few but the main point is that the "Cannot find module 'X'" is Node-Red telling us that we have a missing dependency.

Luckily it is very easy to install these and as an example if we wanted to install the swear filter node, which filters out bad words we just simply have to carry out the following steps.

To ease the pain of you having to go through the whole process each time for each module I have constructed a list of the common modules that you will need to install.

Simply stop Node-Red and follow the process as we did for the bad words example but replace sudo npm install badwords with the following line.
Download File
Copy Code

You should by now be fully setup to use Node-Red and to keep up to date with the goings on for the projects why not take a look at the following links.