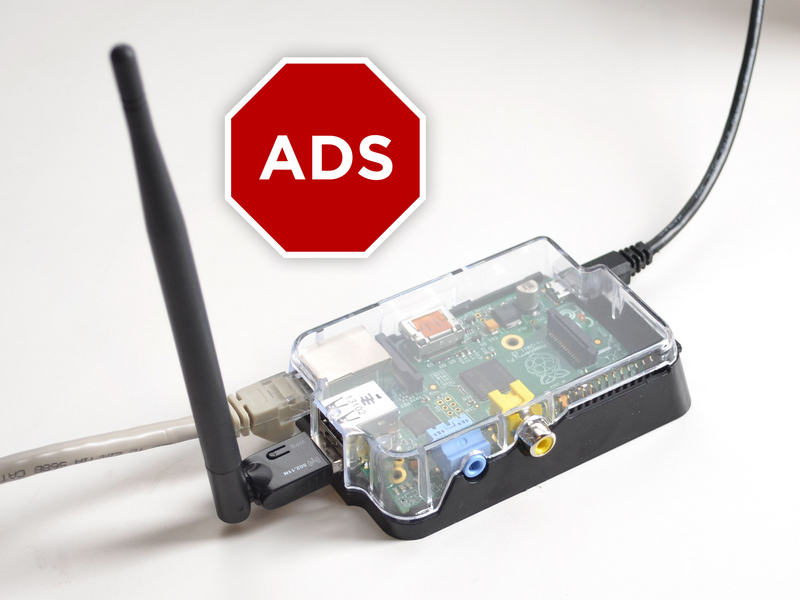 This tutorial will show you how to use your Raspberry Pi as a WiFi access point that blocks ads by default for any devices using it. This is really neat in that it would work for your Android or iOS device, your Xbox 360, TiVo, laptop, and more without needing to customize any of those devices other than to use your Raspberry Pi as the access point for WiFi. Using an ad-blocker can be useful for conserving bandwidth, helping out low-power devices, or for keeping your sanity while browsing the web!

I do suggest whitelisting your favorite ad-supported sites so that you can continue to support them (this tutorial shows how to do this as well).

It's not easy keeping up with those wily ad serving companies so we'll also setup a way to keep your ad blocking lists up to date as part of this tutorial.

I used many pages as inspiration in order to set this up, including, but not limited to:
Each of those links contain useful information, but the next few pages will walk you through in detail each step necessary to successfully block ads with your Raspberry Pi.

This tutorial assumes you have your Pi mostly set up and ready to go.Please follow the tutorials in order to When done you should have a Pi that is booting Raspbian, you can connect to with a USB console cable and log into the Pi via the command line interface. Your Pi should also be already setup as a WiFi access point from step 4.It is possible to do this tutorial via ssh on the Ethernet port or using a console cable.If using a console cable, even though the diagram on the last step shows powering the Pi via the USB console cable (red wire) we suggest not connecting the red wire and instead powering from the wall adapter. Keep the black, white and green cables connected as is.

Once you've done all the preparation, setting your Pi up as an ad blocking AP is actually rather simple. The first thing we need to do is install the necessary software, and set it all up.

These are the minimum settings required to get the dhcp server setup properly. There are a lot more settings available as examples in /etc/dnsmasq.conf if you want to configure it further.

Any files added to the directory /etc/dnsmasq.d are automatically loaded by dnsmasq after a restart. This is a convenient way to override or add new configuration files in Debian.

Next, let's update the dns nameservers to route to our pixelserv IP address first. We'll also go ahead and use the google nameservers. 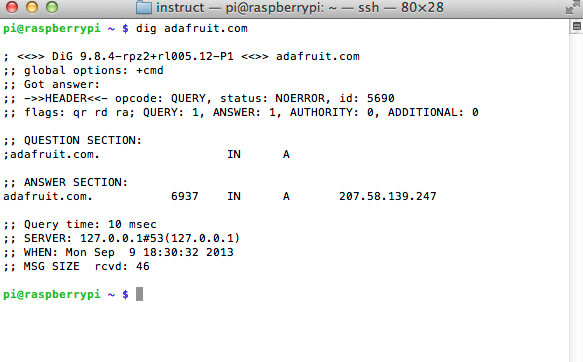 Ok, now that we have all of that setup, let's create a script that will redirect known ad servers to an internal IP address. This will essentially cause any requests to generate an HTTP 404.

Open nano and create a file with the following command:
Download File
Copy Code
Copy and paste the following into the file, and save and exit:
Download File
Copy Code
Notice, in the above script there is a line starting with "#sed ". You can uncomment that, and modify it to remove your favorite sites from the ad blocking list so you can continue to support them. You can add as many of those lines as you'd like. One example would be:

The above script will need to be run as root in order to properly update the configuration file. Basically, what it does it grab a pre-generated list of known ad server domain names from http://pgl.yoyo.org/adservers and save them to a file in /etc/dnsmasq.d/dnsmasq.adlist.conf. It then restarts dnsmasq.

You could manually do this every once in a while, but it's easier if we setup a weekly cron job with the root user. 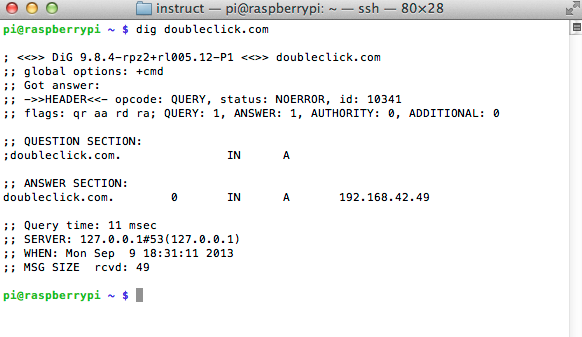 And you should see that it gets routed to the 192.168.42.49 IP address:
One drawback to just stopping here is that we're now timing out on requests that are going to return an HTTP code of 404 for any ad servers. This won't be terribly fast. Another drawback is that any areas with ads will potentially still take up space in the page. We can fix this in the next section.

One way to improve the performance of the ad blocker is to serve either a 1x1 transparent image, or a blank HTML page. This can be done in a number of ways so we'll show a couple of the options available to you.

The first, and maybe most common is to use pixelserv. This is a really lightweight perl web server that simply serves a 1x1 transparent GIF to any requests made to it. Thus, anytime ads get redirected by dnsmasq to pixelserv, you'll actually receive a tiny image that won't be visible on the page.

You could try running the server now, but you'd get the following error:

Now reboot your Pi so the settings take effect:

Download File
Copy Code
Once your system comes back up, try running the server. It won't output anything in the console, but you can try refreshing a page you know that has ads that get blocked:
Download File
Copy Code
It could get annoying having to always run that command. The next logical step would be to create a service that will start the server for us whenever we start our Pi. Let's do that.

First, kill the server you're running by typing "Ctrl-C".

If you decide you'd rather use the Apache solution, you can disable the pixelserv service on startup:
Download File
Copy Code

As an alternative to pixelserv, we can use Apache to serve a blank html file with an HTTP 200 response. Apache is a bit heavier but likely much more stable than pixelserv.

Let's start by installing Apache (make sure to stop and disable pixelserv if you've already installed that):
Download File
Copy Code
By default apache is listening to all IP addresses on port 80. You can change this if you like, but it's not necessary.

Make the same change for the default-ssl file as well (sudo nano /etc/apache2/sites-available/default-ssl).

At this point if you restart Apache, you'll get an error about not being able to determine the server's fully qualified domain name. We can fix that by executing the following command:
Download File
Copy Code
Ok, now we can restart apache:

Does this work with SSL traffic?
Yes! This blocks adware and malware sites at the domain (DNS) level, so it will work with HTTPS as well as non-SSL pages

Will this work as a WiFi-to-WiFi bridge? (Or WiFi-to-Cellular)
In theory, if you can get the Access Point setup to work WiFi-to-WiFi then yes the adblocking part will too. However we don't have that part of the tutorial written, and most people get best performance with Ethernet-to-WiFi

My resolv.conf gets overwritten on reboot

If you'd like this to be permanent, and continue after a reboot, follow the tips suggested on the Adafruit Forums.

Halloween Monsters with CRICKIT and Circuit...
By Dano Wall
9
Beginner

Circuit Playground Express: Piano in the Key of Lime
By Kattni Rembor
23
Beginner