(Music: The Owl Named Orion by Dan-O at DanoSongs.com)

Here’s an easy-to-build project that really packs a lot of blinkenlight for the effort: a little pocket-size music visualizer we call “Piccolo.”

Technically this would be called a “spectrum analyzer,” but as this is not a precision scientific instrument, we’re more comfortable labeling it a “visualizer.” It’s strictly for show.

This intermediate Arduino project shows a clear progression from input to processing and then output in a package that’s appealing and easy for minds to grasp: music and lights. It’s not abstract or “science-y” unless you choose to peel back the layers…

Begin by assembling the LED matrix and “backpack” board as described in the Adafruit LED Backpacks tutorial.

If using the LED matrix for the first time, we very strongly recommend working through that full tutorial first. This will let you test and confirm that the Matrix is properly assembled before moving on to this more advanced project. 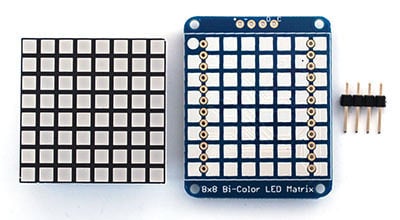 If working with a breadboard as we show below, solder row headers on to the microphone breakout and LED matrix backpack boards (three pins on the former, four on the latter). You can optionally use 90 degree headers if you’d like either component to be positioned standing up.

Thanks to the “smarts” of the LED matrix backpack, this whole project requires fewer than a dozen connections total:

For a current “R3” Arduino board (such as the Arduino Leonardo or more recent Arduino Uno and Mega boards), the wiring should resemble this: 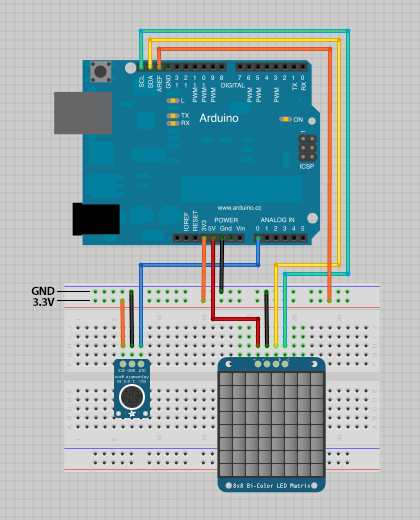 If using a “classic” Arduino board — an Arduino Uno version R1 or R2, Arduino Duemilanove or Diecimila (with 328P chip), the matrix data and clock lines should be connected to analog pins 4 and 5: 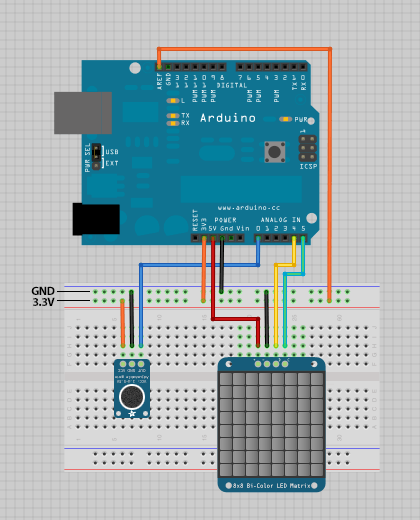 Note: the project only works with 8-bit AVR boards. It relies on a library that’s written in assembly language, and won’t compile on newer 32-bit boards like Arduino Zero or Adafruit Metro Express.

Piece of cake!
You can power the Arduino from the USB connection or using a battery or power supply connected to the DC jack. The LED matrix draws a couple hundred milliamps at most, so we can safely power it through the Arduino.

Begin by downloading the Piccolo repository from Github. Download the code from all the directories.

If you’re unfamiliar with installing Arduino libraries, please follow this tutorial. And never install in the Library folder adjacent to the Arduino application itself…the proper location is always a subdirectory of your home folder!

If you haven’t already installed the Adafruit LED Backpack Library (for using the LED matrix), please download and install that as well. For modern Arduino IDE versions, use the library manager.

Once the folders and libraries are situated, restart the Arduino IDE, and the “Piccolo” sketch should be available from the File->Sketchbook menu.

With the Piccolo sketch open, select your Arduino board type and serial port from the Tools menu. Then click the Upload button. After a moment, if all goes well, you’ll see the message “Done uploading.” The project should now be responsive to sound…try clapping your hands!

If there’s no response from the device, try the following:

Using the normal Arduino analogRead() function would be much too slow for sampling audio. Instead, a feature of the microcontroller’s analog-to-digital converter called free-run mode is utilized. This automatically takes repeated analog samples at precise intervals…about 9.6 KHz for this project, the maximum a 16 MHz Arduino can handle with 10-bit samples.

The raw audio samples are converted into a frequency spectrum using a fast Fourier transform or FFT. There are a number of Arduino FFT libraries out there, but we keep finding ourselves returning to the venerable ELM-ChaN ffft library for its speed and good looks.

The FFT output still needs a bit of massaging to make for a good presentation on the limited 8x8 matrix. Several tables of scales and weights de-emphasize certain frequency ranges as they’re reduced to just eight columns. The software works at keeping the graph interesting, but some columns will always be less lively than others, especially comparing live speech against music of varying genres. If everything seems to stick toward one end of the graph, try another musician, musical genre, or different speakers.

Our wiring diagrams illustrated this project with a half-size breadboard, but for a smaller package the parts can also fit on an Arduino breakout shield: 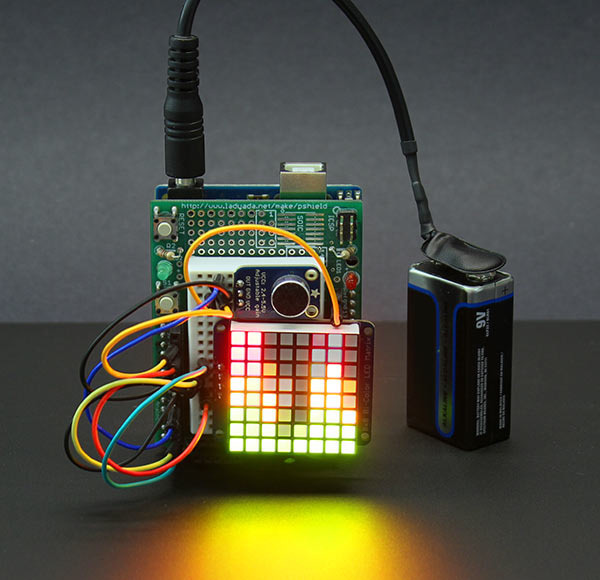 Depending how you choose to orient the LED matrix, the matrix.setRotation() function can be used to keep the graph upright.
Just a concept — this is not functional — but it’s interesting to note that an Arduino Micro, the LED matrix and the microphone amplifier are almost perfectly matched to the dimensions of a 9 Volt battery: 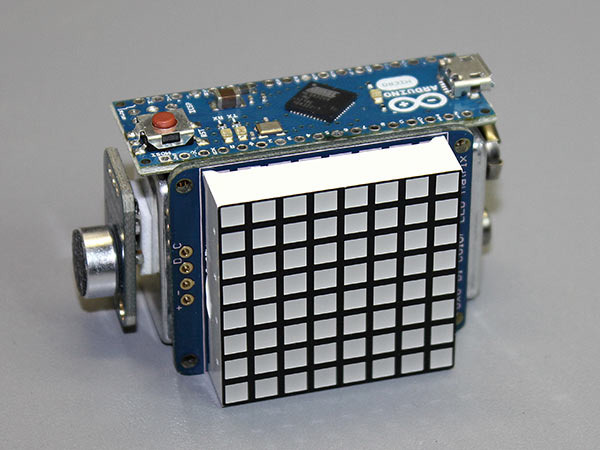 If you do attempt an extra-compact build like this, please keep in mind that the Arduino Micro includes a 5 Volt regulator, allowing it to be powered from a 9 Volt battery. Most small form-factor Arduino-compatible boards do not include a regulator, and will be damaged if you attempt to power them directly from 9 Volts! For such boards, either add your own regulator to the circuit, or use an appropriate battery pack: three alkaline AA or AAA cells in series, or four rechargeable NiMH cells.

Additionally, the code may need adjustments for some “alternative” Arduino boards…most likely the analog channel number, which may be mapped to different pin numbers on different boards.
Finally, because ADC registers are accessed directly, specific interrupts are used, and the FFT code is in AVR assembly language, this software will not run on upscale boards like the Arduino Due, ChipKIT or Teensy 3.0. It is strictly for “classic” Arduinos.

Speech Synthesis on the Raspberry Pi
By Anne Barela
53
Intermediate 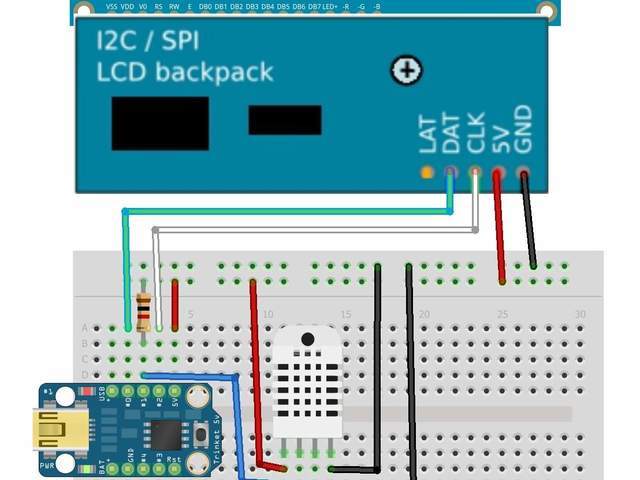