CUPS — the Common Unix Printing System — is an open source print spooling and scheduling system. One of the interesting aspects of CUPS is its filtering system, which can reconstitute print job data between formats. For example, rasterizing PDF graphics for output on non-PostScript printers.

Turns out there’s a CUPS filter for thermal printers similar to those Adafruit offers. With a little setup, it’s possible to have these producing razor-sharp graphics unlike anything I’ve seen from a thermal receipt printer before. Much nicer than our improvised Python library! 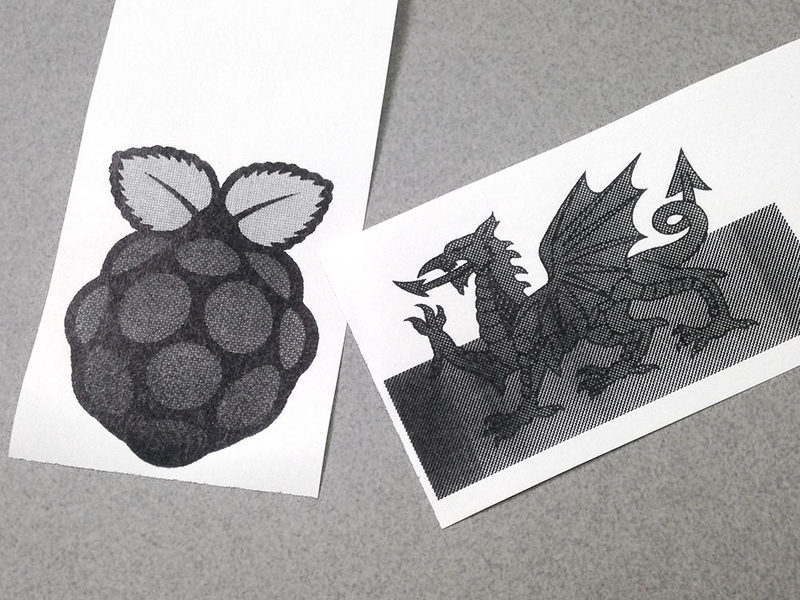 This guide is based on a tutorial by Stewart Russell, with some changes and additions to work with Adafruit’s various thermal printers.

Some prior Raspberry Pi experience is assumed — downloading the OS, writing an SD card, basic system and network configuration, etc. You can search the Adafruit Learning System for related guides if any of this is unfamiliar.

Phillip Burgess
If you’re using a TTL printer (not USB), DO NOT connect it to the Raspberry Pi yet! It will spit paper like mad. Some system configuration is required first…

Download the latest version of Raspbian if you haven’t already. This guide requires the full version of Jessie — not the “Lite” edition — as some of the setup requires the graphical user interface. You’ll also need a keyboard, mouse and monitor attached. Write the OS to an 8GB or larger SD card, insert in the Raspberry Pi and power it up. After a minute or two you’ll see the Raspian desktop.

From the “Pi” menu at the top left, select Preferences→Raspberry Pi Configuration. Or Linux guru types might be more comfortable opening a terminal window and running raspi-config from the command line. 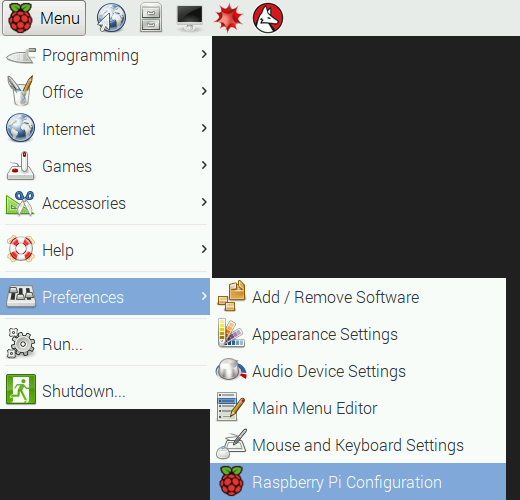 The following settings are required:

The following are optional but recommended: 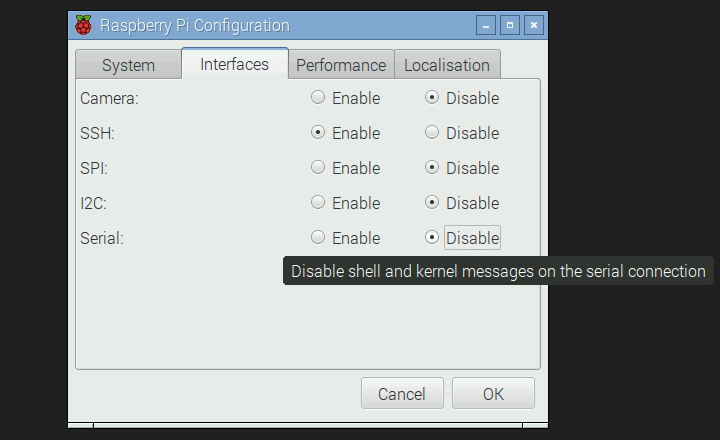 Set up any other options to your liking, click “OK” and then reboot when prompted.

After rebooting, you can set up networking. Ethernet is usually a simple matter of plugging in a cable. Wireless networking is more involved and beyond the scope of this guide…you can search for other guides on this topic, or many networks are easily accessed by clicking the network icon in the status tray at the top-right of the screen.

It’s perfectly safe to connect the TX/RX directly to the Raspberry Pi GPIO pins. Though these printers are sometimes called “5V TTL,” in reality the controller logic all runs at 3.3 Volts…the inputs are simply 5 Volt tolerant so they can work with Arduino and similar.

If using a TTL printer and it starts printing a bunch of junk, disconnect power immediately! Return to the raspi-config utility and disable the serial console, then reboot.

Look for the baud rate that’s printed near the bottom of the page. This is typically either 9600 or 19200 baud. This is important…you’ll need to know the correct value for your printer later. 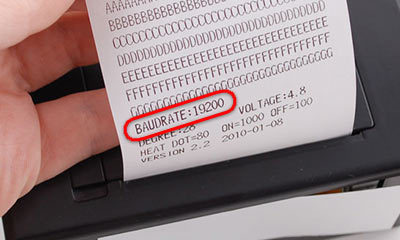 (Don’t fret if your printer is “only” 9600 baud. This has no impact on the speed of printing! The paper feed rate is really the bottleneck…the baud rate just determines how we’ll get the Pi and printer communicating.)

Once your printer’s connected, powered up and not spouting junk, launch a Terminal window and we’ll enter a few commands…

For a TTL (not USB) printer, type the following (substitute the correct baud rate for your printer):

(In older versions of Raspbian we’d use /dev/ttyAMA0 instead. If the above commands present a problem, check what’s in the /dev directory and use serial0 or AMA0 as necessary.)

For a USB printer, type:

If your printer outputs only gibberish: check the baud rate and try again. Substitute 9600 or 19200 as needed.

Sometimes there’s a little bit of gibberish at the start of the first line printed; some residue in the serial buffer. This won’t happen on subsequent lines or after we’re done fully configuring the printer.

If nothing happens, check the following:

Once the printer passes the above basic test, it’s time to move on to software.

Make sure the package database is up-to-date, then install several packages…

Though not unusually large (about 75 MB total), there are many small pieces to process. This could take about 30 minutes to install, so you might want to go mow the lawn or something.

Once that’s done, download and install this CUPS filter for the thermal printer:

Now we’ll switch over to using the GUI for the rest. 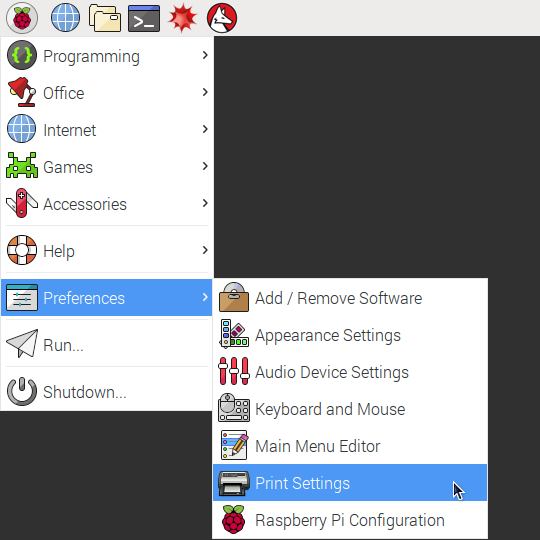 If the “Print Settings” menu option is not present, the ZJ-58 CUPS filter didn’t install. Check the above steps and try again.

No printers have been set up yet, so click the “Add” button: 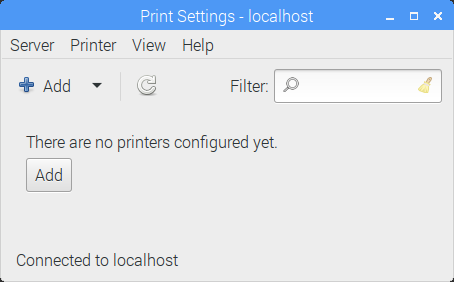 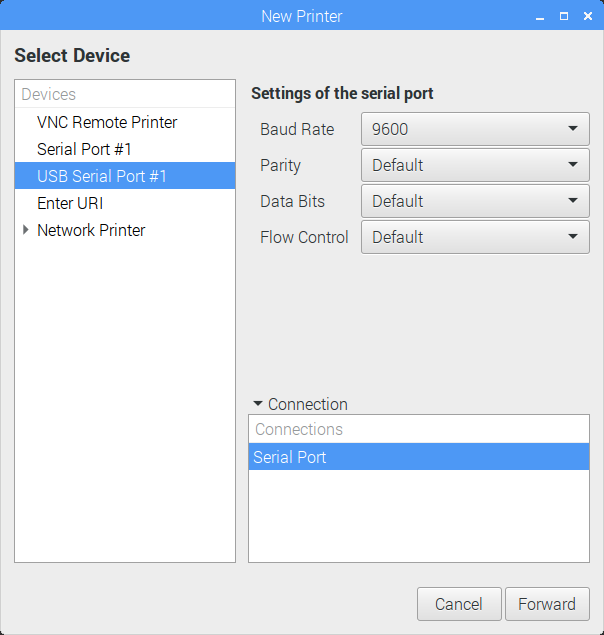 For TTL printers: If “Serial Port #1” is present, select that and set the baud rate. Otherwise (slightly older Raspbian OS), highlight “Enter URI” in the Devices list. Then in the device URI field, type “serial:/dev/serial0?baud=19200” (or 9600) (and might be “ttyAMA0” instead of “serial0”, depending on commands tested earlier). The device name is case-sensitive, so get this exactly right! 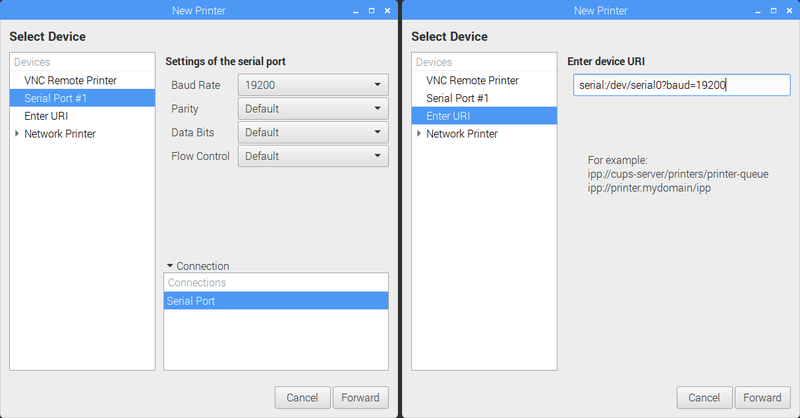 Click the “Forward” button. On the next form, click “Select printer from database,” then scroll to the very bottom of the list and select “Zijiang” — this is a brand of thermal printer that happens to use the same command set. 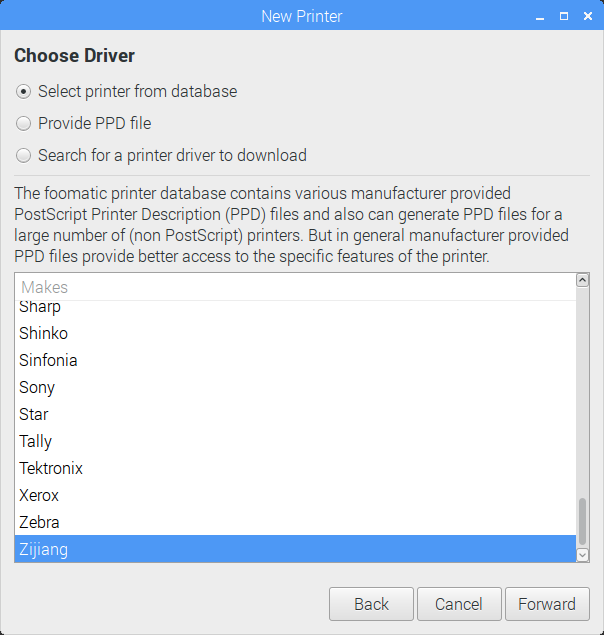 Click “Forward” again, and on the next form select the “Zijiang ZJ-58” driver: 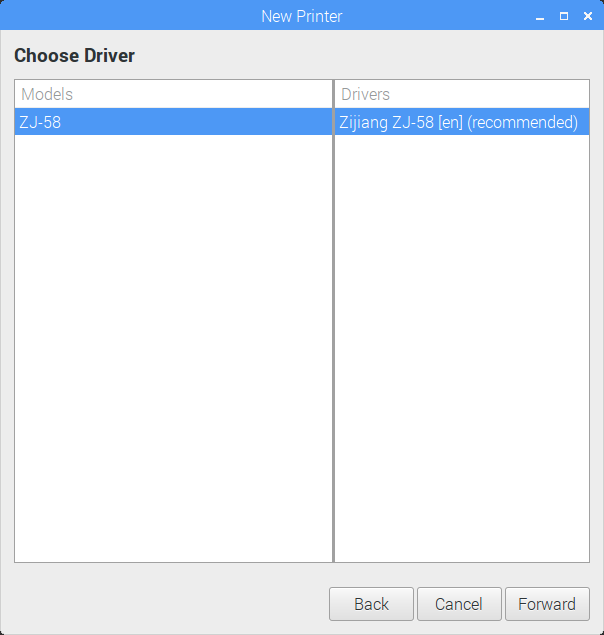 “Forward” once more, then you’ll have the option of assigning your printer a name…or just stick with the default ZJ-58: 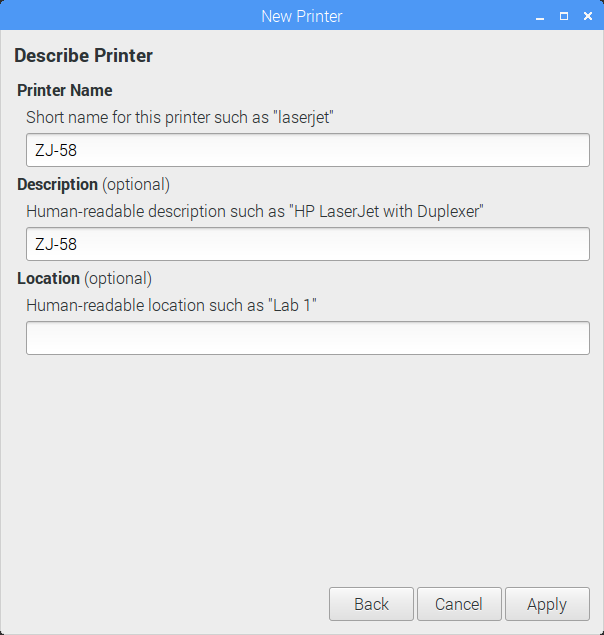 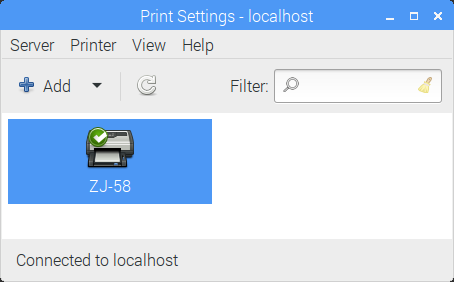 Click the ZJ-58 icon, then from the “Printer” menu select “Properties”: 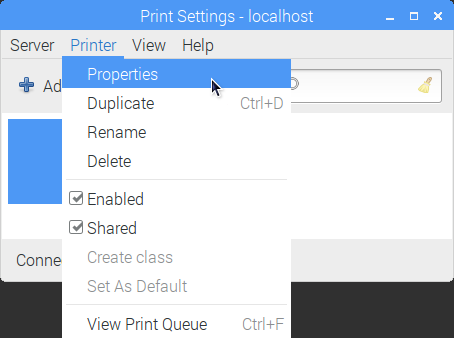 Your mileage may vary; if you want more or less paper feed after each print, this is where you’ll find it later. 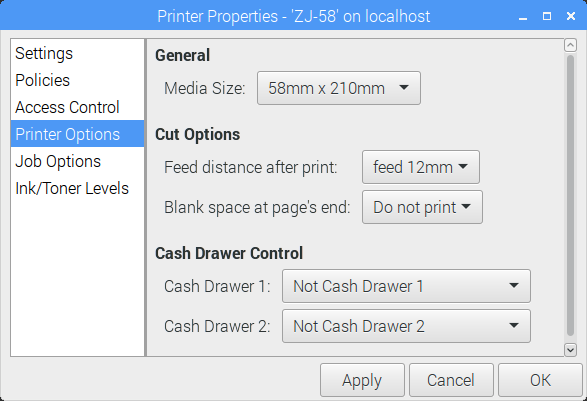 After clicking “OK,” the printer should now fully work with the Raspberry Pi via the “lp” or “lpr” services.

Let’s give it a try! Back to the Terminal window…

This should print the “This is a test.” string again…but unlike the first test, you’ll notice this one isn’t using the printer’s internal font…it’s actually rasterizing the text and we can tweak settings such as size.

You can try a printing bitmap as well:

“-o fit-to-page” is important — most graphics, if printed “actual-size,” would print just a narrow strip cropped from the left side.

CUPS is a complex system way beyond the scope of this guide (there are entire books on the subject), but the CUPS web site explains some command-line options to get you started. 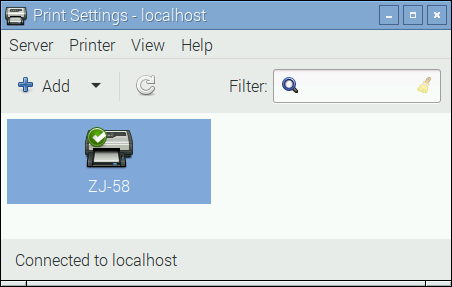 Double-click the ZJ-58 printer, or highlight it and select Printer→Properties: 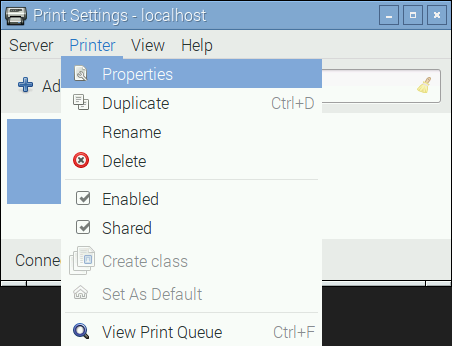 In the “Policies” section, make sure “Shared” is checked, then click OK. 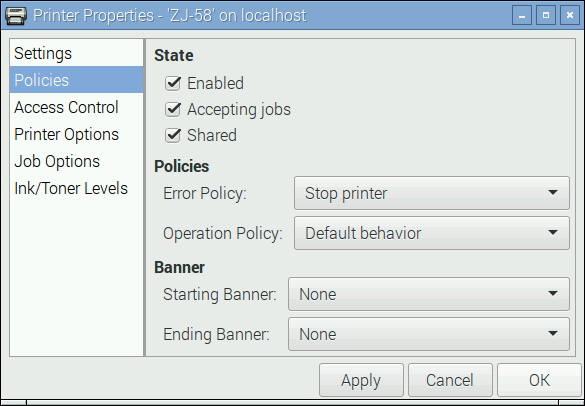 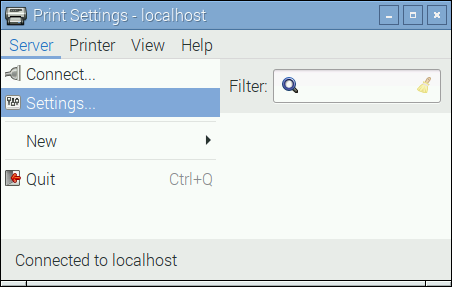 Check the “Publish shared printers connected to this system” box, then click OK. 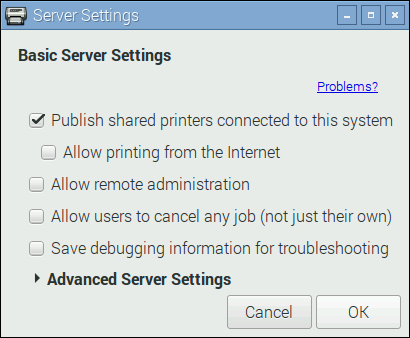 The printer is now accessible to other systems…even non-Linux computers running Windows or Mac OS X.

For example, on a Mac, go to the “Printers and Scanners” system preference form, click the add (+) icon, and you’ll see the networked printer available there: 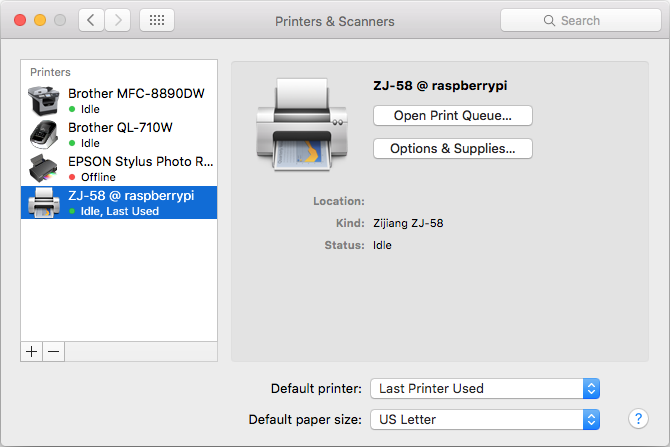 It’s then possible to print to the thermal printer from any application.

Due to the peculiar media size, this will require some trial and error and experimentation. Though the media size is described as “58mm” wide, the actual imageable area is more like 48mm. If you try to print any “normal size” artwork, or if Media Size is set to “Letter,” you’ll just get a narrow strip from the left edge of the page. 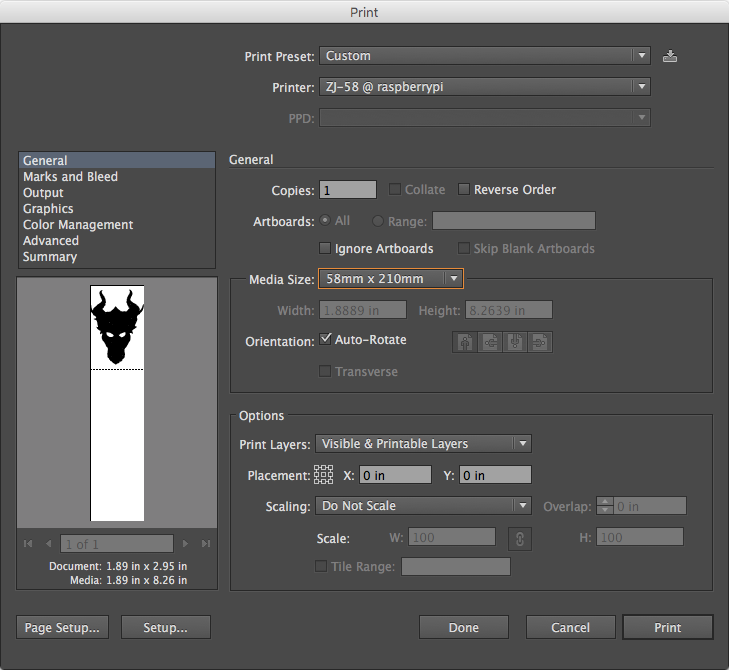 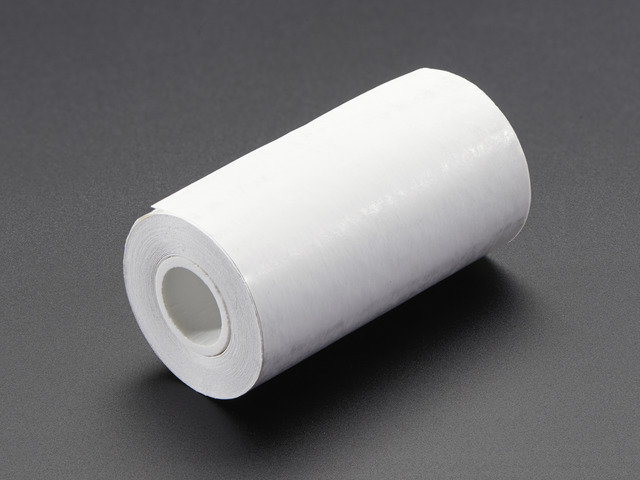 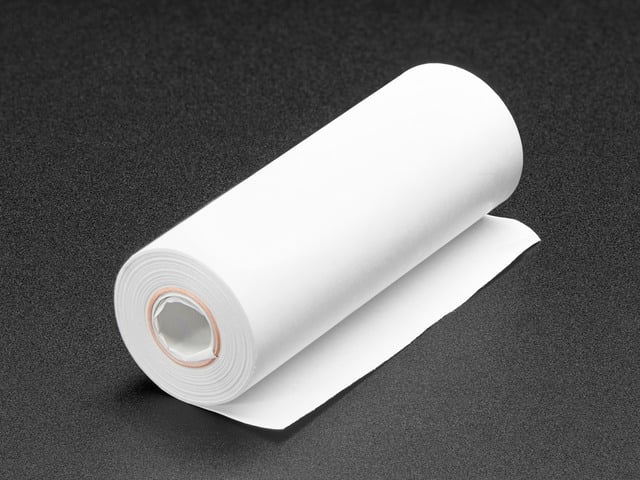 Build an "Internet of Things" connected mini printer that will do your bidding!
Phillip Burgess

Set up your RPi Internet of Things Thermal Printer to generate one time pads!
Anthony Sherwood