This tutorial may be outdated. It is no longer recommended for beginners, and may need modifications to code or hardware that is not indicated in the tutorial.
MICROCONTROLLERS / MICROPYTHON CIRCUITPYTHON PROGRAMMING / MICROPYTHON / CIRCUITPYTHON 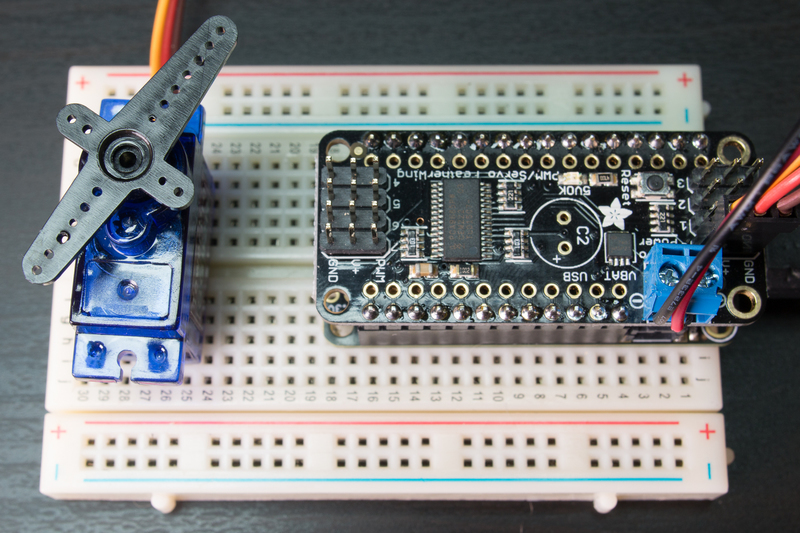 Servo motors are one way to make projects come to life with exciting movements like steering robots, flipping switches, and more.  To control a servo you need to generate a special PWM, or pulse-width modulation, signal.  Most development boards can generate a few basic PWM signals, but what if you need to control a lot of servos or don't have a board with PWM support?  The PCA9685 PWM driver board comes to the rescue!  This driver board can generate up to 16-channels (or 8-channels in FeatherWing form) of PWM signals--perfect for driving many servos!

This guide explores how to use the PCA9685 PWM & Servo driver with CircuitPython and MicroPython.  You'll learn how to connect the PCA9685 to a board and use it to control LED brightness and move servos from Python code.

For more background check out these guides on servo motors:

Make sure to follow the board and PCA9685 driver board product guides to assemble and verify they work before continuing.

If you're using a Feather and the PCA9685 FeatherWing just slide the wing into the Feather's headers and you're done!  The wing will use an I2C connection to talk to the Feather board.

If you're using a PCA9685 breakout you'll need to connect its I2C and power pins as follows: 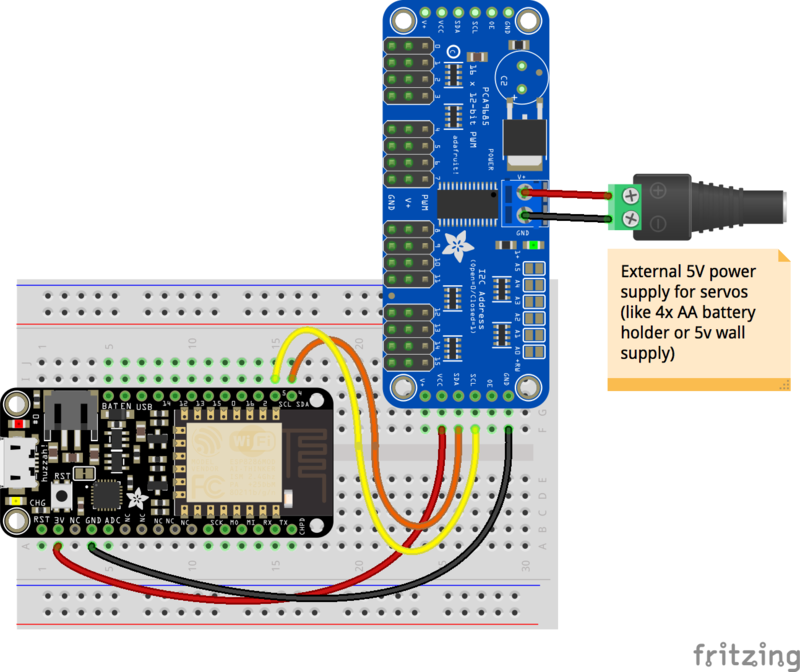 Once your board is wired to the PCA9685 continue on to learn how to use a MicroPython module to control servos and LEDs! 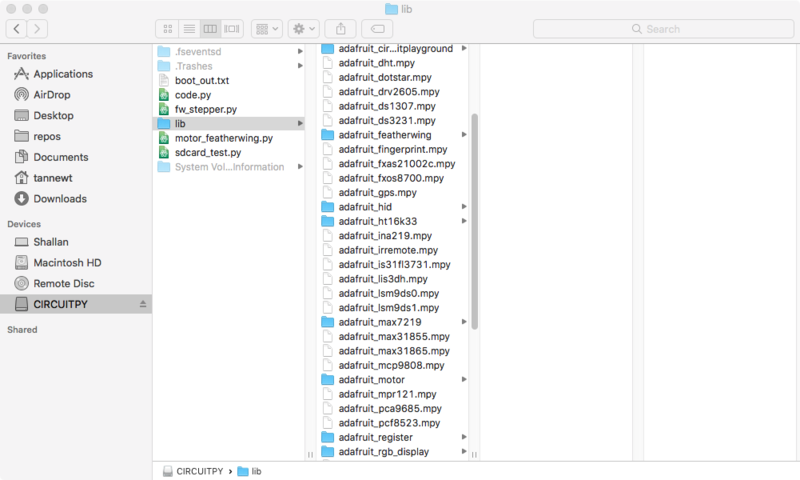 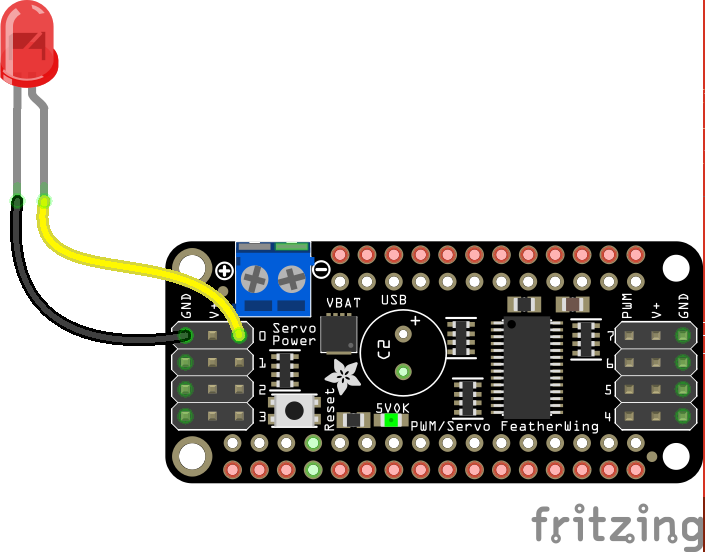 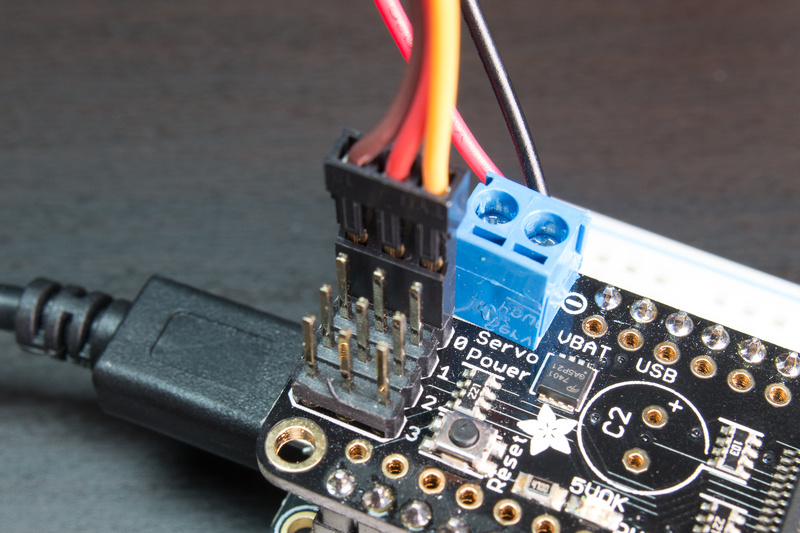 Tony DiCola
The examples in this guide are no longer supported. Check out the PCA9685 driver guide for CircuitPython and Python usage: https://learn.adafruit.com/16-channel-pwm-servo-driver
Note this page describes how to use a MicroPython.org version of this library with MicroPython boards. Skip back to the previous page if you're using a CircuitPython board like the Feather M0 express!

In addition to CircuitPython there's an older MicroPython version of the PCA9685 library that you can use with some MicroPython boards.  Before you get started it will help to be familiar with these guides for working with MicroPython:

To use the PCA9685 with your MicroPython board you'll need to install the micropython-adafruit-pca9685 MicroPython module on your board.  Remember this module is for MicroPython.org firmware and not Adafruit CircuitPython!

Next download the latest pca9685.mpy, servo.mpy, motor.mpy, and stepper.mpy file from the releases page of the micropython-adafruit-pca9685 GitHub repository.  You'll need to copy all of the files to your MicroPython board's file system and can use a tool like ampy to copy the files to the board.

The following section will show how to control the PCA9685 from the board's Python prompt / REPL.   First connect to the board's serial REPL so you are at the MicroPython >>> prompt.

First you'll need to initialize the I2C bus for your board.  On MicroPython.org firmware which uses the machine API you can initialize I2C like the MicroPython I2C guide mentions.  For example on a board like the ESP8266 you can run (assuming you're using the default SDA gpio #4 and SCL gpio #5 pins like on a Feather & PCA9685 FeatherWing):

Then import the PCA9685 module as follows:

At this point you're ready to use the PCA9685 module to dim LEDs and controls servos.  Using the module with MicroPython is exactly the same as with CircuitPython so check out the CircuitPython usage section to see details on using the board.