Skip to main content
MicroPython for SAMD21 Load Firmware
This tutorial may be outdated. It is no longer recommended for beginners, and may need modifications to code or hardware that is not indicated in the tutorial.

This guide is no longer up to date - please check out https://learn.adafruit.com/welcome-to-circuitpython/installing-circuitpython for the introduction guide to installing CircuitPython on ATSAMD21 boards (and more!)

Go to the SAMD21 MicroPython releases page and download the latest .bin file for your board.  Currently the Arduino Zero and Feather M0 boards are supported and have prebuilt firmware images.

Never use bossac or its Windows equivalent (BOSSA) 1.9.0 or higher without specifying an offset: 0x2000 for SAMD21, 0x4000 for SAMD51. Omitting the offset will damage the fuse settings on the board and can lead to a broken bootloader. https://learn.adafruit.com/welcome-to-circuitpython/non-uf2-installation#download-bossa-2978786-12

Once you have a firmware image you'll need to download a special version of the BOSSA tool that can load firmware on SAMD21 boards.  This tool is actually used internally by the Arduino IDE when it programs these boards, however you can use it yourself to load custom firmware like the SAMD21 MicroPython port.

Go to the BOSSA GitHub releases page and download the latest release for your platform (for Windows you want the mingw32 version).  You might need a tool like 7zip to open the .tar.gz archive.  Once unarchived you should find a bossac command line executable tool.

Open a terminal and navigate to the folder with the bossac tool.  Then check the tool runs by running it with the --help option:

Or if you're using Linux or Mac OSX you'll need to add a ./ to specify that bossac is run from the current directory like: 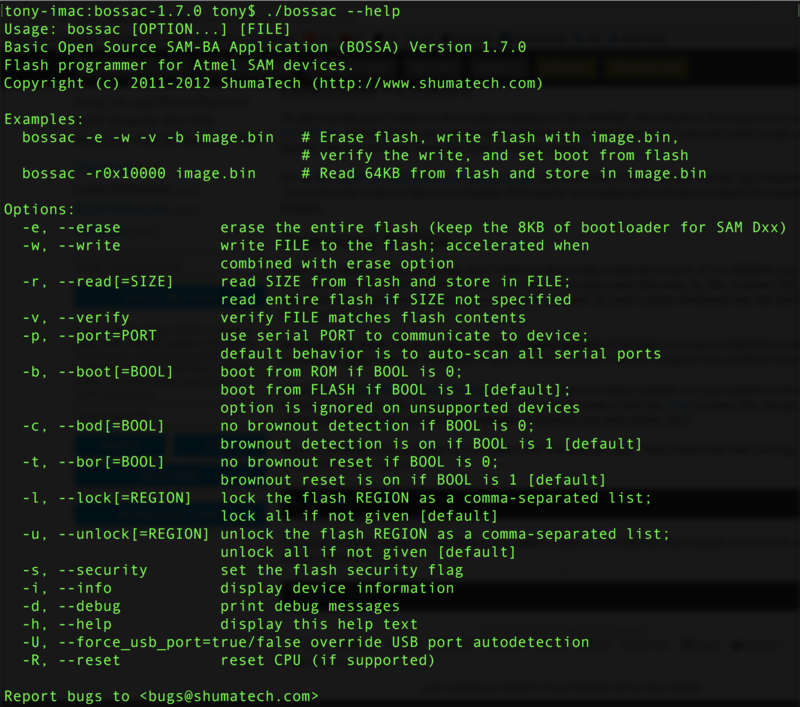 Make sure you see BOSSA version 1.7.0 or higher!  If you see a lower version then you accidentally downloaded an older version of the tool and it won't work to flash SAMD21 chips.  Go back and grab the latest release from this BOSSA GitHub repository as mentioned above.

For a Feather M0 board (including all variants like Feather M0 proto, AdaLogger, Bluefruit, RFM69, etc.) you need to put the board in a special bootloader mode before flashing firmware.  Plug in the board and 'double click' the reset button.  You should see the pin #13 LED start to fade on and off to signal that the bootloader is running.  Once you see the bootloader running skip down to the BOSSA flash command below.

Also be sure you've followed the learn guide for your Feather M0 board to setup the Arduino IDE and install any necessary drivers.  In particular Windows will need drivers installed before you can flash the Feather M0.  Linux and Mac OSX should be usable without any extra driver install.  Be sure you can use and program your Feather M0 with Arduino before diving into loading MicroPython--this will help you make sure the board is working as expected before complicating things with custom firmware.

For the Arduino Zero you don't need to do anything special to enter the bootloader.  However make sure you've plugged in the board using the native USB port and not the programming port.

With your board plugged in and running the bootloader (for Feather M0 boards as mentioned above) you're ready to flash the SAMD21 MicroPython firmware onto the board.  Copy the firmware .bin file to the same directory as the bossac tool, then in a terminal navigate to that location and run the following command:

Flashing new MicroPython firmware will delete all files on the board's filesystem! Backup files you wish to keep and restore them after the flash.
Download File
Copy Code

Remember on Linux & Mac OSX you need to add the ./ to the front of the bossac command!

Also change firmware.bin to the name of the firmware .bin file you downloaded.

If you're using the Vagrant VM described later to build SAMD21 MicroPython firmware be sure the VM is halted and not running or else it might 'steal' the serial port from your host machine!

Finally note on Linux you might need to run as root with the sudo command if your user doesn't have access to the serial port.  If you see an error like the device can't be found then try running with sudo in from of the ./bossac command.

After BOSSA loads the firmware you should see output similar to the following:

Once the firmware is loaded you're ready to access the serial REPL to run MicroPython code.  Note that on Windows you might need to install this CDC serial driver from PJRC to make the board accessible as a COM port.  For Linux and Mac OSX no driver is necessary to install.

For example on Linux or Mac OSX you can use the screen command to open the REPL:

Screen should open the port and if you press enter you should see the Python >>> REPL prompt.  Try typing in a print('Hello world!') command and pressing enter to see MicroPython working on the SAMD21!

On Windows use the putty program as mentioned in the MicroPython serial REPL guide.

Woo hoo, that's all there is to loading SAMD21 MicroPython on a board!  Once you see MicroPython running you can start using it just like other MicroPython boards.  Tools like ampy can load files on the board's file system and even run scripts.

Be sure to read the quick start guide on supported modules so you know what is currently supported by SAMD21 MicroPython!

Revert Back to Arduino Sketches

If you'd like to revert back to using your SAMD21 board with Arduino it's as easy as using the Arduino IDE to program the board again.  For Feather M0 boards you might need to 'double click' the reset button to manually start the bootloader, then program the board from Arduino.  For Arduino Zero boards the programming port and Atmel EDBG programmer type are guaranteed ways to always reprogram a board regardless of what it was previously running.

Should you ever want to go back to MicroPython just follow the steps on this page again! 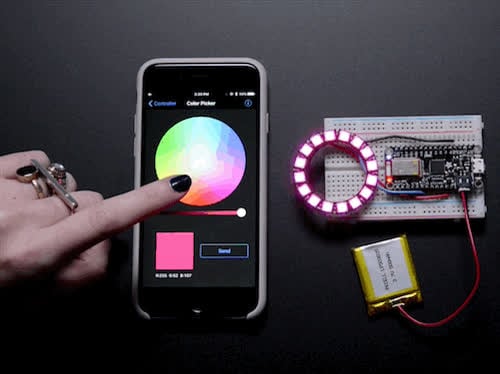