Skip to main content
MicroPython Basics: What is MicroPython? Overview
This tutorial may be outdated. It is no longer recommended for beginners, and may need modifications to code or hardware that is not indicated in the tutorial. 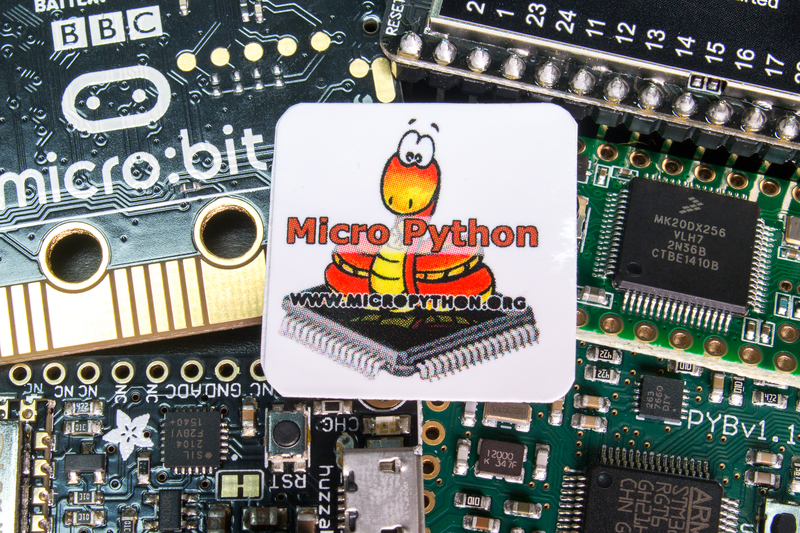 In addition this guide also explores CircuitPython which is Adafruit's open source derivative of MicroPython with a focus on being simple for beginners to get started with electronics.  Read below to learn more about the differences between CircuitPython and MicroPython.  Both use the same Python programming language and have similar features--almost anything you can do in MicroPython can be done in CircuitPython (and more!).

MicroPython is a tiny open source Python programming language interpretor that runs on small embedded development boards.  With MicroPython you can write clean and simple Python code to control hardware instead of having to use complex low-level languages like C or C++ (what Arduino uses for programming).

The simplicity of the Python programming language makes MicroPython an excellent choice for beginners who are new to programming and hardware.  However MicroPython is also quite full-featured and supports most of Python's syntax so even seasoned Python veterans will find MicroPython familiar and fun to use.

Beyond its ease of use MicroPython has some unique features that set it apart from other embedded systems:

What is CircuitPython? How does it relate to MicroPython?

CircuitPython is Adafruit's open source derivative of MicroPython.  This version of MicroPython was created to add support for easily getting started with electronics using boards like Circuit Playground Express, Trinket M0, Gemma M0, and more.  Check out the CircuitPython documentation for more details about it, including a list of differences between CircuitPython and MicroPython.

What can MicroPython do?

Almost anything you can imagine!  Just like an Arduino board MicroPython can control hardware and connected devices.  You can control GPIO pins to blink lights, read switches, and more.  You can drive PWM outputs for servos, LEDs, etc. or read analog sensors with an analog to digital converter.  Talking to I2C or SPI devices is easy too, and you'll even find network & WiFi support on some boards.  MicroPython even has libraries for controling other hardware like NeoPixels and LED strips, tiny OLED displays, and more.

In short, MicroPython can do a lot!

For some examples of what MicroPython can do check out the following:

What can't MicroPython do?

There are very few limitations with MicroPython, almost anything an Arduino can do can also be done by a MicroPython board.  However one thing to realize is that MicroPython code isn't as fast and might use a little more memory compared to similar Arduino or other low-level C/C++-based code.  Usually this doesn't matter since the speed and memory differences are small and don't impact most normal uses.

However be aware that code which has tight timing or performance requirements might not work in MicroPython.  For example 'bit banging' a fast serial protocol entirely in MicroPython might not be the best idea.  However there are ways to mix both MicroPython and low-level C/C++ code so you can have the best of both worlds--your main logic in clean and easy to understand MicroPython code, and performance critical parts written in faster low-level code.

How does MicroPython/CircuitPython compare to Arduino?

There are a couple important differences between Arduino and MicroPython.  The first is that Arduino is an entire 'ecosystem' with the Arduino IDE (i.e. the desktop application you use to write and upload sketches), the Arduino programming language (based on C/C++), and Arduino hardware like the Arduino Uno R3 board.

MicroPython is only a programming language interpreter and does not include an editor.  Some MicroPython boards support a web-based code prompt/editor, but with most MicroPython boards you'll write code in your desired text editor and then use small tools to upload and run the code on a board.

The second important difference is that the MicroPython language is interpreted instead of being compiled into code the CPU can run directly like with the Arduino programming language.  Interpreted means when MicroPython code runs it has to do a little more work to convert from MicroPython code to instructions the CPU understands.

A major advantage of interpreted code is that it can be much cleaner and simpler compared to languages that compile directly to CPU instructions.  You can even write and run interpreted code like MicroPython directly on a board without any compiling or uploading--something that's impossible with Arduino!

One disadvantage of interpreted code and MicroPython vs. Arduino is that there's less performance and sometimes more memory usage when interpreting code.  A function or sketch written in Arduino will run as fast as possible on a board's CPU whereas similar code in MicroPython will be a little slower because it has to interpret every instruction and convert it to CPU code.  In practice this performance hit is rarely an issue for the kinds of projects you might create with Arduino.  If you do run into performance or memory problems MicroPython allows you to write code in C/C++ or even the board's native CPU assembly instructions for maximum perfomance.

Ultimately there's no simple answer for the choice between MicroPython and Arduino.  Each has strengths and weaknesses that should be considered for your own projects.  Don't be afraid to try MicroPython--for some boards like the ESP8266 you can actually use either MicroPython or Arduino and pick the best one for your needs.

Be sure to check the MicroPython website to see the latest information on supported boards.  As of August 2016 these boards support MicroPython in various ways:

See the MicroPython GitHub repository for more information on other supported boards & platforms.

Do I need to be a Python expert to use MicroPython?

Absolutely not!  MicroPython implements most of the Python 3 core language and as such it can be as simple or complex as you need.  As a Python beginner you'll feel right at home accessing MicroPython's REPL and experimenting with code.  Python is praised for having a clean and easy to learn syntax that's great for beginners.

If you're new to Python it will help to get familiar with the basics of Python programming on your computer.  Some good free resources for learning Python are:

If you're more experienced with Python you'll be amazed at just how much of Python's expressive power is in MicroPython.  Advanced concepts like functional and dynamic programming are all possible with MicroPython.  You can even dive into the MicroPython codebase and start extending it with new functions, libraries, and more.

Where can I learn more about MicroPython?

Check out the following resources to learn more about MicroPython and how to use it with specific boards:

How do I get help with MicroPython?

There's a growing community of MicroPython users who might be able to help you if you have questions or issues:

Remember MicroPython is primarily a volunteer effort so be respectful of people spending their spare time to help others!

How do I get started with MicroPython?

Check out more guides in the MicroPython Basics series: