Audio and Video: Play and Record

Don't underestimate the low-tech way to capture any sound, be it from a home movie, a TV show, or from your cat.

The procedure is simple: Play the video or sound and record the audio. All modern computers have a microphone-in jack, headset mic or a webcam available for recording. Or, cue-up your sound and use your cell/mobile phone to record it.

Versions of Windows prior to Windows 10 have an program called Sound Recorder. This pops up a small window and the settings are fairly intuitive as far as record, stop, and play.

Windows 10, at least current editions, removes the Sound Recorder program and provides a Voice Recorder app. In the Cortana/Search bar type Voice Recorder. You'll get a big window with not much guidance.

If you do not have anything on your screen, click the three dots in the lower right and adjust the microphone settings. You may need to enable the microphone for this app and then run the app again. 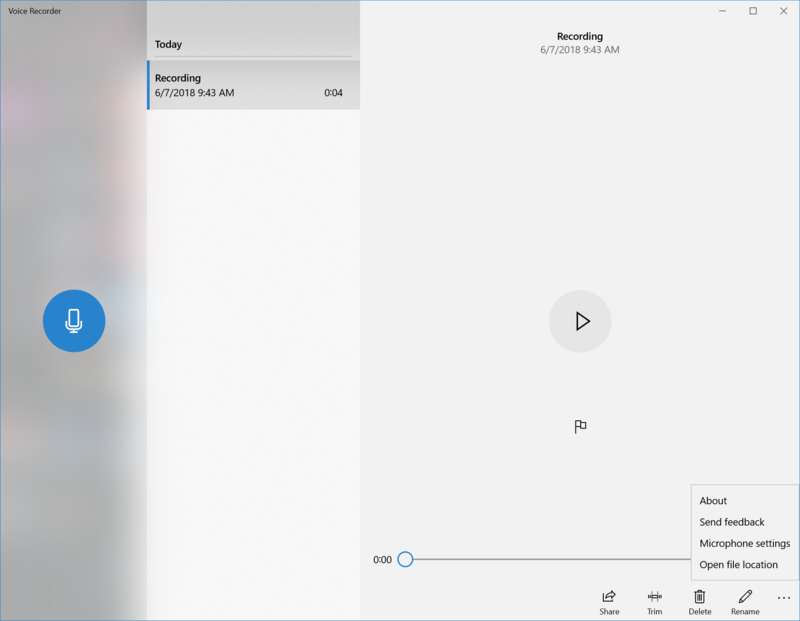 Sound Recorder records WAV files directly. Voice Recorder records MPEG 4 audio files (no worries, read on). When you have a recording from Voice Recorder it will be listed to the right of the microphone button. Right click the file and select Open file location. You will then see your file - for example Recording.m4a. Note the directory, for example C:\Users\myusername\Documents\Sound recordings (where myusername is the user name you have in Windows  10).

You can also record a video in Windows 10 via the Camera app. It is suggested you use Voice Recorder to avoid having to split the video from the audio.

Follow the next page on Convert Audio from Videos to Sound Files to capture the sound from the video.

Many mobile phones offer audio and video recording capability. The methods vary depending on the model phone you have and its operating system.

It is suggested you try to use a voice recorder app first to save steps in the file conversion if you were to take a video and want to then use the audio from the video.

There is no stock voice recorder but the phone manufacturer may have an equivalent application on your device. On Samsung, look for an app called Voice Recorder. If you have no such app, search the Internet for suggestions to try to find something simple, useful, and low cost. Lists such as "10 best voice recorder apps for Android" may help.

If you must record video, use your camera app, use the video record feature, and convert the file according to instructions on the next page on video to WAV conversion.

There is no Apple stock voice recorder app on iDevices. There are many third-party apps on the App Store if you wish to use one of those.

As with Android, it is suggested you try to use a voice recorder app first to save steps in the file conversion if you were to take a video and want to then use the audio from the video.

There are countless methods of recording a sound in the air to some recording device. If you have some hardware to do so, go ahead and use it!

Once That You Have a File with Sound

After you have recorded an audio or audio/video file, you probably will not know exactly what format the file is in. We need to ensure the file can be used in your electronics project.

Take the file you recorded and copy it to your computer. We will need to convert the file into a 22,050 kHz, 16-bit, mono WAV file for your project.

Use the guides below to get a digital sound file to use in your projects.