The CPU (Central Processing Unit) is the piece that runs the show. Everything else revolves around it. The CPU used in an MCU is the central defining feature. You will see MCUs described by the CPU they contain: AVR, ARM Cortex-M0+, etc. The CPU defines the the size of the MCU, i.e. the size of the internal data bus. This is indicative of how big of a number can be operated on at once. An 8-bit CPU can operate of 8-bit bytes (values from 0 to 255). In comparison an ARM Cortex CPU has a 32-bit bus and works on 32-bit words (values 0 to 4,294,967,295). That's a bit of a difference.

The CPU is the piece that executes your code and makes use of the rest of the MCU. We'll look at CPUs in more detail in a later guide.

The CPU in the '328 is an 8-bit AVR core that Amtel started developing in 1996 (Atmel is now part of Microchip). The '328 uses what's called a Harvard architecture, which means that it has separate memory systems for program (flash) and data (static RAM) storage. To enhance performance, the CPU has 32 general purpose 8-bit internal memory locations, called registers. These are part of the CPU, meaning no external memory access needs to be made to read or write them. If data can be kept in registers as much as possible, performance can be kept very high, even though the whole microcontroller has a relatively slow, small CPU.

The rest of the CPU is fairly typical:

The diagram below shows these pieces and how they connect/communicate. Note that the grey memory blocks are not part of the CPU. 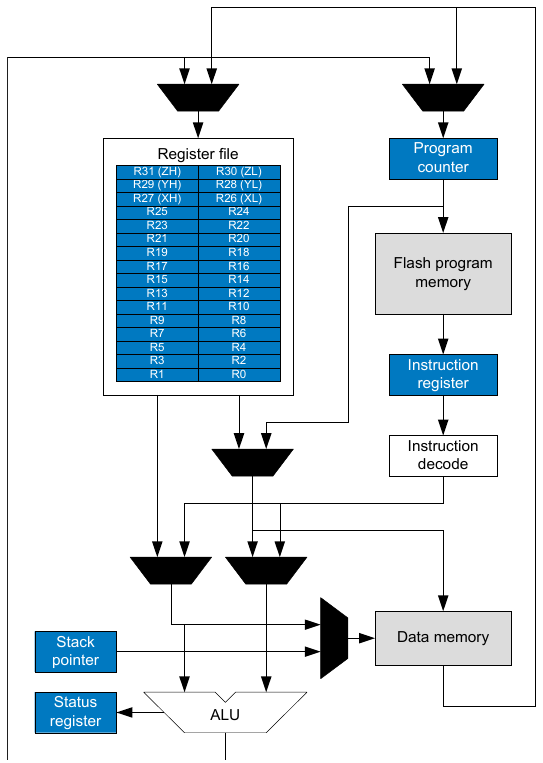 From the ATMega328 datasheet
The building blocks Memory