Skip to main content
Make your own PCB with Eagle, OSH Park, and Adafruit! Shaping the Board
Feedback? Corrections?

Before we can start placing the headers and traces on our board, we need to have a general idea of the shape of our board. There are several things that you will want to keep in mind when designing the shape of the board, however given those considerations you still have a lot of flexibility.

An important early step of designing the board is determining where components will be placed on the board. Many items have a fair amount of leeway with where they can be placed however components that will connect the board to something else such as headers, mounting holes, or sockets will generally have some constraints on where they should be placed. A USB socket for example can certainly be placed in the middle of a board facing a header, but then you wouldn't be able to plug in your cable once the board is assembled: 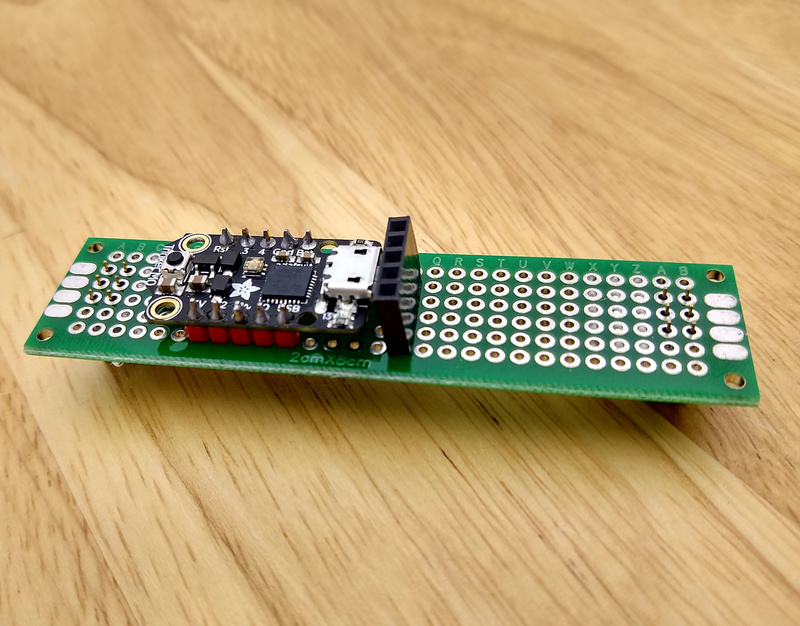 In the case of our board, the headers that will allow you to connect the adapter board we are making to the Trinket need to be positioned such that they will line up with the headers on the Trinket. This is one of the main reasons why we're using design blocks extracted from the original board files; the spacing of the headers is already correct. All we have to do is place the headers in relation to each other.

The B Stands for Board, not Boring

Traditionally, PCB shape has been largely governed by the practical constraints such as mechanical connections or the enclosure that they're mean to fit into, however that need not be the case! Certainly your board has to be functional, however given the shape of the board is one of the most distinct visual aspects of it, why not get creative? For this project I will be making the board a fairly functional but boring rectangle, but you could make it (nearly) any shape you want! Square? Sure! Triangle? Isosceles or Scalene? Tardis? If you can settle for 2D and put in the work, sure!

One of the "limitations" of the free version of Eagle is that it limits the size of your board to 12.4 in2 or 80 cm2  (as of version 9.2.2). I put limitations in scare quotes because while it might seem small, you will likely go a long ways with Eagle before you reach this limit. The vast, vast majority of Adafruit's boards including most, if not all. the breakouts, feathers, trinkets, metros, featherwings, gemma boards and circuit playgrounds are all well within this size.

It's also worth considering that given that OSH Park charges by the size of the board, generally it's worth trying to make boards on the smaller side, if you have a choice.

With the board window open, you should see the three headers (two from the Trinket and one from the INA219) and the outlines of the Trinket and breakout and a larger black area with orange borders: 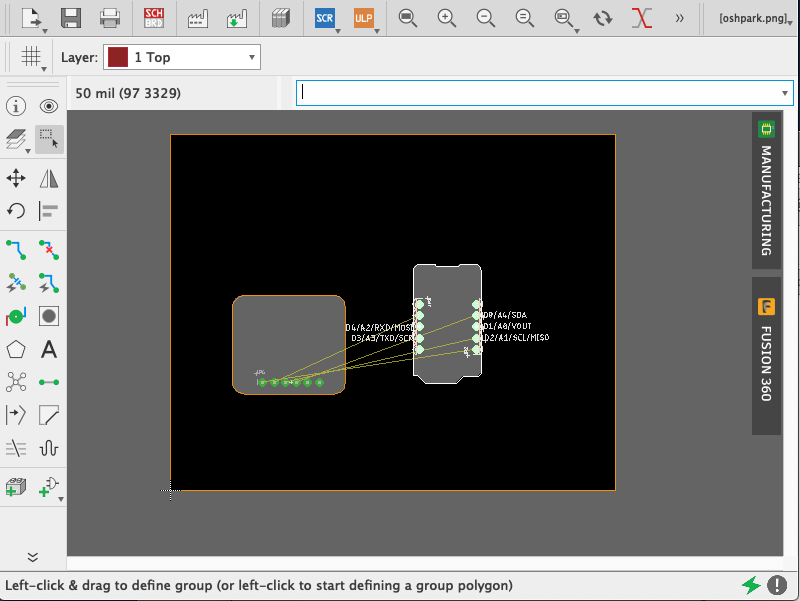 The black area is Eagle trying to do its best to represent the current area of the board as defined by the extent of the Dimension layer's contents. The large black box comes from Eagle's default behavior for a new board which is to create an outline as large as the free version allows. The holes are because Eagle is interpreting the outlines of the Trinket and breakout as cutouts because they're within a larger outline. We'll fix this as we adjust the outlines of the adapter board.

Before setting the size of the board, we should position the headers relative to each other to help us judge how the Trinket and INA219 breakout will be positioned once attached to the adapter PCB.

While moving something with the move tool, right clicking your mouse will rotate it.

By orienting the outlines and headers together and in relation to each other, we now know where the boards will be once connected to the adapter board.

Now we can use the move tool to resize the board outline to something more practical, and the delete tool to remove the Trinket and INA219 breakout outlines.

With the board outline more or less defined, we can start working on the actual routing of traces. As you do more work on the board, you may find that you need to make further adjustments to the outline, but this first draft will be good enough to start using to route the board and work on the silk screen.

Now is a good time to save if you haven't done so already.