Remember old iOS when apps looked like the thing they were trying to replace? The notes app looked like a notebook, the calendar looked like a desk calendar, etc. It's called skeumorphic design and Magic Cap uses it for everything. Click the X in the upper right corner of the simulator dialog and check out your (literal) desktop. 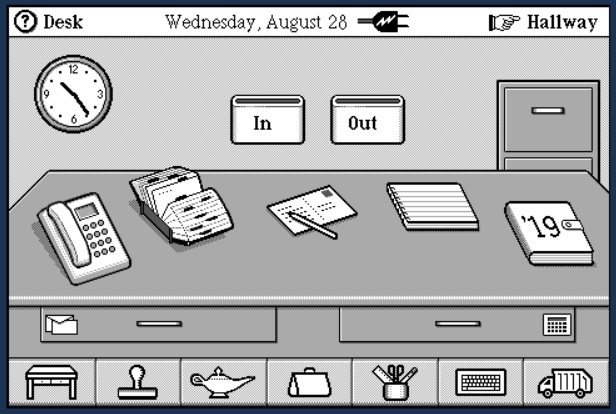 You can use the mouse to tap on things (remember that we're emulating a touchscreen/stylus device). Try tapping on various things on the desk. You can return to the desk by clicking the desk icon in the lower left.

It's not entirely stable, so doing some things (like dialing the phone) may crash the emulator or even the Mac emulator. If that happens just start it up again and it should be fine. In some cases it may corrupt the installation and even re-extracting it won't help. If you made a backup of the dsk file you can just shut down and replace the current dsk with that to get back to a useful state. Otherwise you may need to build the system again.

Tap the postcard in the middle of the desk to try writing a message. It'll tell you that you need to fill out a name card. Click fill out to go through a short tutorial. 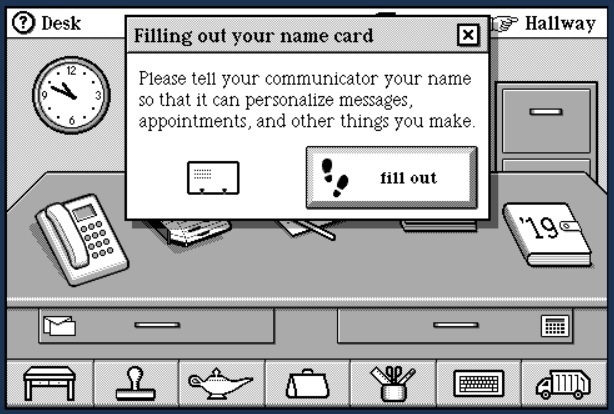 When you reach the part where you need to type in your name, watch what it does after typing a few characters of your first name (if you have a common first name). 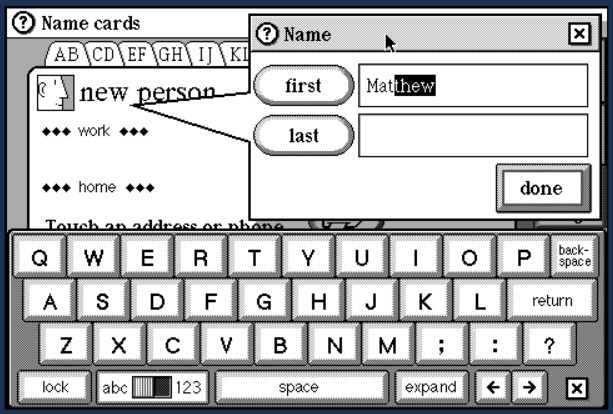 Yes, that's predictive text! Also check out the familiar keyboard that popped up to type in a name. That kind of thing wouldn't show up again for another decade.

When you're finished creating a card, go back to the desk and then tap Hallway in the top right. Here you can "walk" down the hall to visit other pieces of the system, like the control panel and library. There's a game room but sadly it didn't come with any games. The board next to it with the General Magic logo lists the credits and includes some very notable names. 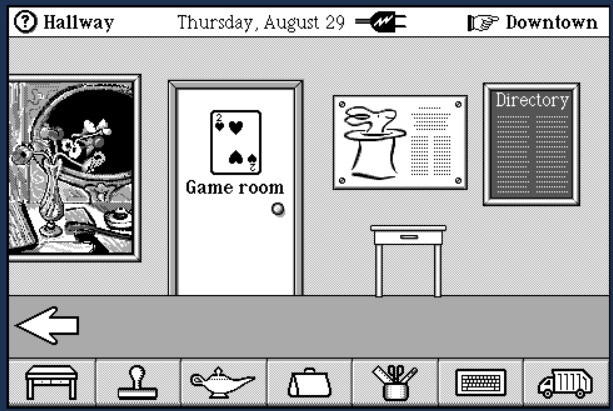 Click Downtown in the top right to exit our building and see what else is on the block. The only thing available is the AT&T store - AT&T partnered with General Magic to provide service through the PersonaLink network.

PersonaLink used General Magic's Telescript - something they called agent-oriented programming. The idea was that your device wouldn't just send data, but would send an entire program up to a server that could then run it and perform different tasks. Companies would run groups of servers that could do this, and they referred to it (in the 90s!) as the cloud.

Yet another idea ahead of its time, PersonaLink didn't last and was eventually shut down. Agent-oriented programming didn't last but twenty years later everything is done in the cloud. 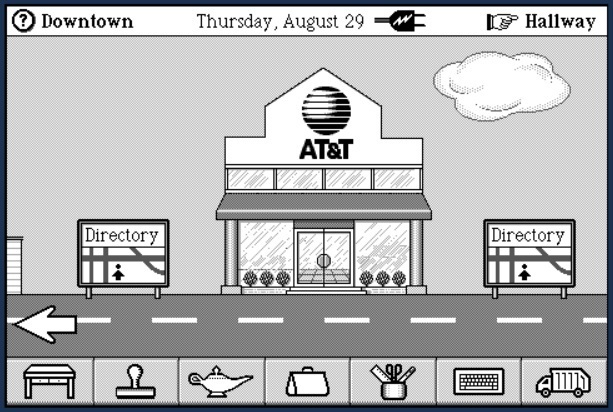 It was possible to install additional packages (apps) and add more to Magic Cap, but our emulator can't install the ones that are available as they're designed for a later version on real hardware.

Speaking of hardware, let's see what this originally ran on.