We'll use Microsoft's drag-and-drop code editor to create the animations.  MakeCode is an easy way to get up and running with the Circuit Playground Express.  No prior coding knowledge is needed, and it's an easy way to experiment and learn to think like a coder.

If you get a flash drive names CIRCUITPY, no worries, press the reset button twice and CPLAYBOOT should show up. It might take a time or two but it does work. 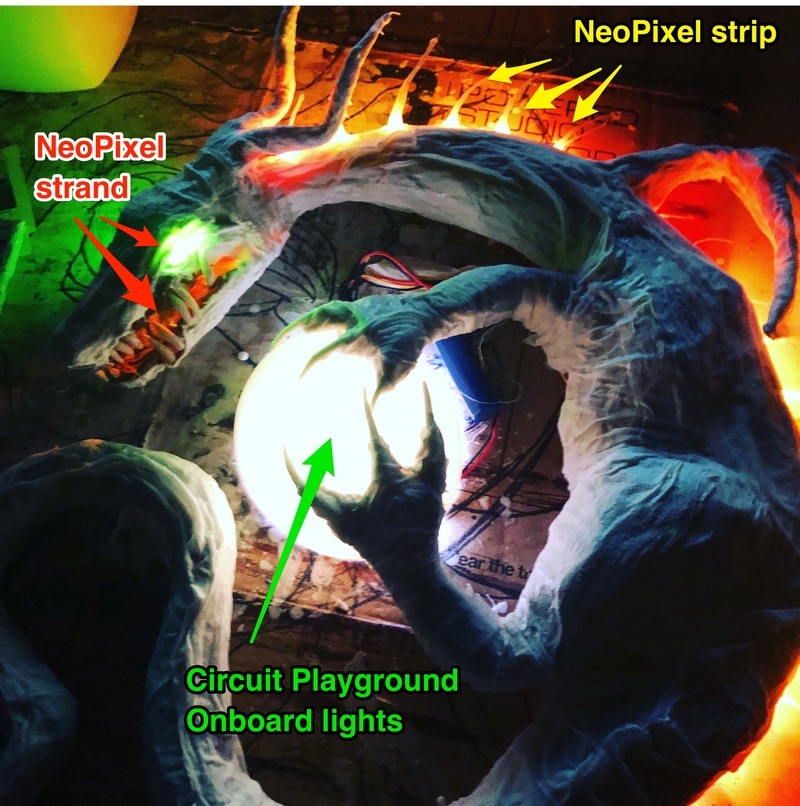 We have three different physical sets of lights:

We'll need to address all these separately in the code, and for the NeoPixel strand we'll need to get even trickier, since we want the eyes (pixels #0 and #1) to act differently than the mouth lights (pixels #2 and #3).

For my dragon, I want a white flickering, pulsing light inside the egg. I want the spines to have a flickering flame effect and the inside of the mouth to be the same, so they both appear to be lit by the dragon's internal fires. And my dragon will have beautiful whirling rainbow eyes.

We'll also code a capacitive touch on/off switch, wired to pin A4. Since our dragon is plugged into the wall, a software switch works fine - we can turn the lights on and off with code. If you're making a battery powered dragon, you may want to add a physical on/off switch, since the way we're doing it here leaves the Circuit Playground Express powered on all the time and that will drain your battery.