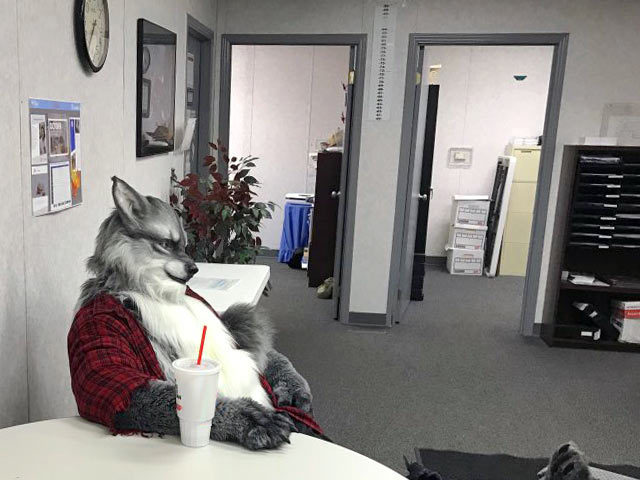 Oh noes! An 11th-hour invite to a Halloween function and you don’t have a costume ready! Or maybe you want something discreet but fun when the work dress code doesn’t permit a full werewolf getup.

HalloWing to the rescue! Our spooky little development board, plus a few extra tidbits from Adabox 009 (or your parts collection) can quickly make an eye-catching accessory that no good host would turn you away for being under-dressed.

PRODUCT ID: 3923
Hear the good news! This wee speaker is a great addition to any audio project where you need 8 ohm impedance and 1W or less of power. We particularly like...
OUT OF STOCK
Out of Stock

PRODUCT ID: 3287
This battery holder connects 3 AA batteries together in series for powering all kinds of projects. We spec'd these out because the box is compact, and 3 AA's add up to about...
$2.95
IN STOCK
Add to Cart

PRODUCT ID: 3898
Lithium ion polymer (also known as 'lipo' or 'lipoly') batteries are thin, light and powerful. The output ranges from 4.2V when completely charged to 3.7V. This battery...
OUT OF STOCK
Out of Stock

HalloWing can run directly from a small lithium-polymer battery (such as the one included in Adabox 009) for an hour or two, depending on what it’s doing. If you want it to run for hours on end…all day or all night…it’s real easy.

Simply use a pocket-sized USB battery bank (the sort you might already have for topping off your cell phone) and a USB A-to-microB cable. This is especially helpful for NeoPixel projects.

PRODUCT ID: 1959
A smaller-sized rechargeable battery pack for your Raspberry Pi or Raspberry...
$14.95
IN STOCK
Add to Cart

Making a Costume of Sound and Motion 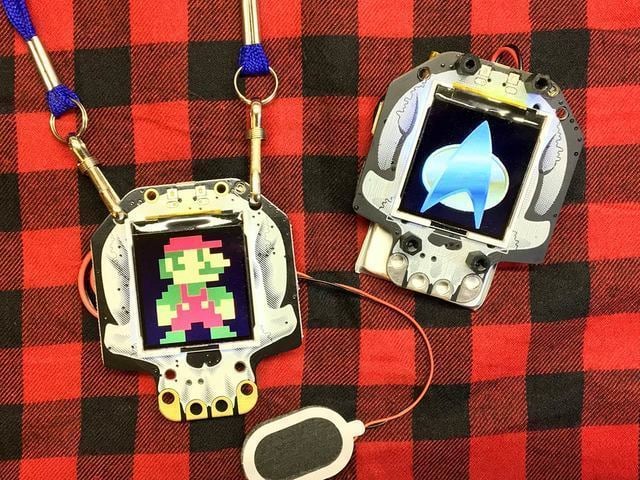 It’s natural to dwell on the visual elements of a costume. Consider for a moment though…the surprise of using other senses…sound, in this case…can provide a boost for a quickly-assembled outfit, or something that outwardly resembles conventional dress.

Here’s a mini-project that shows HalloWing being used like a Star Trek communicator badge, or to make video game sounds any time you jump (or both, if you really want to confuse people).

Our code uses CircuitPython because it’s super easy to customize for different sounds or graphics.

If you’ve overwritten CircuitPython on your HalloWing board with another project (such as the eye or Minotaur Maze), it’s easy to get it back. Follow the steps in this guide to get the standard CircuitPython firmware onto your board.

This project requires CircuitPython 4.0 or higher for loading BMP images (sound will work with 3.0 or higher) version of CircuitPython. Setup directions are the same as shown in that guide, only the .UF2 file is different:

Also in that guide are directions for installing CircuitPython libraries. At the very least, you will need the neopixel and adafruit_lis3dh libraries.

Then fetch the sound and graphics files for this project:

Uncompress this ZIP file, then copy its contents (several files…WAVs and BMPs) to the root directory of the CIRCUITPY drive (i.e. not inside a folder…just straight to the drive).

And then here’s the code we’ll be using. Use a text editor such as Mu to create a new file on the CIRCUITPY drive — code.py — copy and paste this code into that file and save it:

With the speaker, code and sound/graphics files all correctly installed, you’ll see it does two (or three) things:

This line in the code (around line 40) specifies what image to load…it’s mario.bmp by default:

Change this to badge.bmp to use the other example image we provide:

If you can create or convert other images to 128x128 pixel 24-bit color BMP files, copy them to the CIRCUITPY drive and modify the value of IMAGEFILE to match the name. There are some other examples shown in this guide.

Sound files can also be customized. 16-bit mono PCM WAV files (22,050 sample rate or less) are ideal. These are specified just a few lines up in the code, around line 37:

No need to specify the complete filename on these lines; the “.wav” is implied. (e.g. 'touch' will load the file touch.wav).

One line down, you can specify how sensitive the jump detection will be:

This isn’t any particular type of real-world units…just try higher or lower numbers if you even find it’s necessary. Larger numbers will trigger more easily (i.e. you might get some false triggers when walking or moving around), smaller numbers are more strict about jumps.

One last thing…you might find it silly that the code does both types of sounds…touching and jumping. Maybe with your own sound files you have an idea that could make use of both. But otherwise, it’s unbecoming of a starship captain to be making beepy jumping noises, and vice-versa for Italian plumbers. Let’s look at the last few lines of code...

This first checks the accelerometer reading to see if we’ve jumped…and if not, it then proceeds to check the capacitive touch pads. If you just want one or the other, how might you change the code?

If you just want jumping, simply delete the latter three lines, so it’s now just this:

And if you only want the touch pads, delete the prior three lines, and change the “elif” to an “if”:

You can probably see how the code might be modified to load multiple sounds and have each touch pad trigger a different one. I’ll leave that to you as homework if you like. But I will recommend…don’t over-do it! The sounds are funny but can quickly become tiresome…use your gags sparingly and get on with being a good party guest, don’t drag it out into a whole PowerPoint slideshow.

Math (or the lack thereof)

I thought detecting jumps was going to be quite complicated and would lag well behind reality. But it turns out to be one of the simplest things. Using the onboard accelerometer, we just have to check if the board is in free fall and play a sound accordingly.

Funny thing about free fall…the “fall” part makes us think of things on the way down, but that’s not necessarily true. Anything following a ballistic trajectory…that is, without propulsion and influenced only by gravity…is in free fall, even on the way up. Throw a ball, and the moment it leaves your hand (its source of propulsion), it’s on a ballistic trajectory. Jump, and the moment your feet leave the ground, it’s the same thing. (We can disregard air resistance as negligible here.) So we don’t have to sift through the accelerometer readings looking for spikes of acceleration…quite the opposite, just look for zero (or close to it):

X, Y, Z refer to the three axes of the accelerometer. The orientation of the board completely doesn’t matter in this application, we just want the magnitude of the acceleration, in any direction…that’s what the multiplications and additions on the next line do…mostly…

Many situations would require taking the square root of that result to get the actual acceleration magnitude, in actual meters-per-second-squared real-world units. Square roots are relatively slow to calculate. Since we’re just comparing against a number, we can speed things up by leaving out the square root, and instead square the value we’re comparing against (JUMP_THRESHOLD). The default value of JUMP_THRESHOLD is 4.0, which means we’re really looking for an acceleration magnitude less than 2.0 meters/second² (normal acceleration due to gravity is 9.8 m/s², and perfect free fall would be 0.0…given our readings and our jumping may be a little sloppy, this is “close enough” to free fall with hopefully not too many false positives from just energetic walking around). It’s that simple.

A variation on the code makes it respond to footsteps…

This *IS* my day job. pic.twitter.com/gMS5Lfl2rb

In the video above, so we can hear it outside, the HalloWing’s speaker output has been wired into a portable amplified speaker worn on a belt…but for smaller indoor gatherings, the little oval speaker from Adabox 009 may suffice.

HalloWing can be worn on a lanyard, tucked in a pocket, or even ride along inside one’s trick-or-treat candy bucket…it still senses steps and jumps!

It’s not a commercial-grade step counter…it might miss some steps, or register false positives…quite fine though for casual Halloween shenanigans, for something that can be made and customized very quickly. Try it out!

The accompanying WAVs and BMP are in the same ZIP file downloaded from the “Making a Costume…” page.

The WAV files don’t require a complete filename; the “.wav” is implied. (e.g. 'stomp' will load the file stomp.wav). The BMP needs a whole filename.

If you find it too sensitive to steps, or not sensitive enough, change the value of PRECISION around line 48:

Other ways to improve results include more secure mounting of the HalloWing board. Worn on a lanyard, HalloWing bobs around a bit and may register false steps. Buttoned in a pocket or attached to a hat with an elastic band is usually more reliable. The nice thing here is that the board doesn’t need to be in any particular orientation, it will still detect movements, so use whatever is easiest or most comfortable!

Advanced users could get into fine-tuning the step-detection algorithm, or using only one or two accelerometer axes (requiring the board in a particular orientation for use).

The following can also be done quickly with few parts:

This Larson Scanner tutorial was originally written with the Trinket microcontroller in mind, but we’ve since updated it with changes to run on HalloWing as well. It’s a little more work than the eyeball idea above…you’ll need to edit some code and mount the NeoPixel strip somehow. Attach it to a hat or a quick cardboard box robot head and you’re well on your way.

See this guide on how to make a slideshow of images for your HalloWing or other CircuitPython compatible boards: Creating Slideshows in CircuitPython.

Use your imagination, stay safe, and have fun! 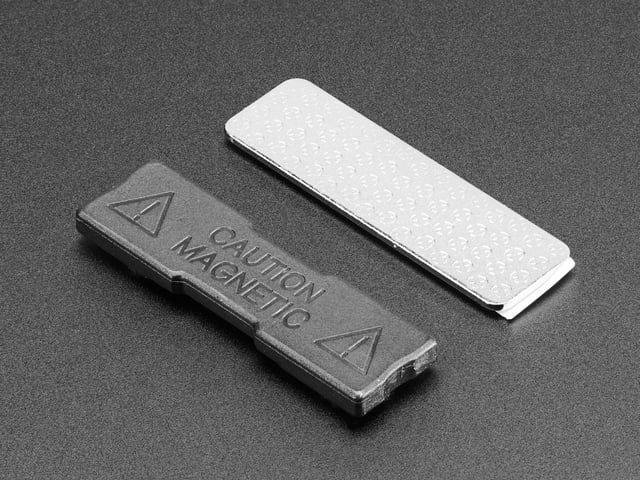 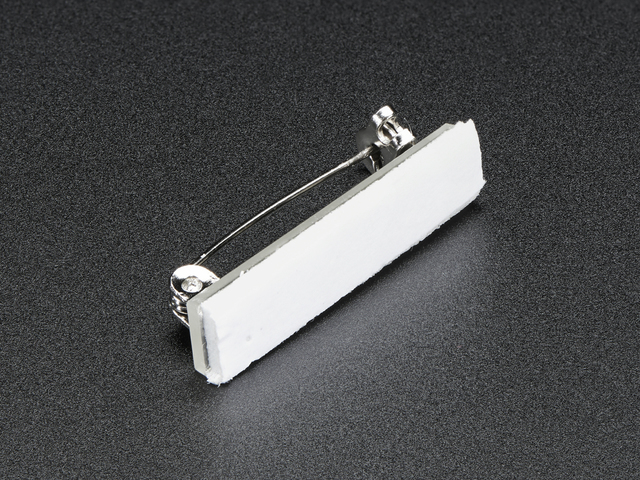 Silver Pin Back with Foam Adhesive
$0.45
Add to Cart