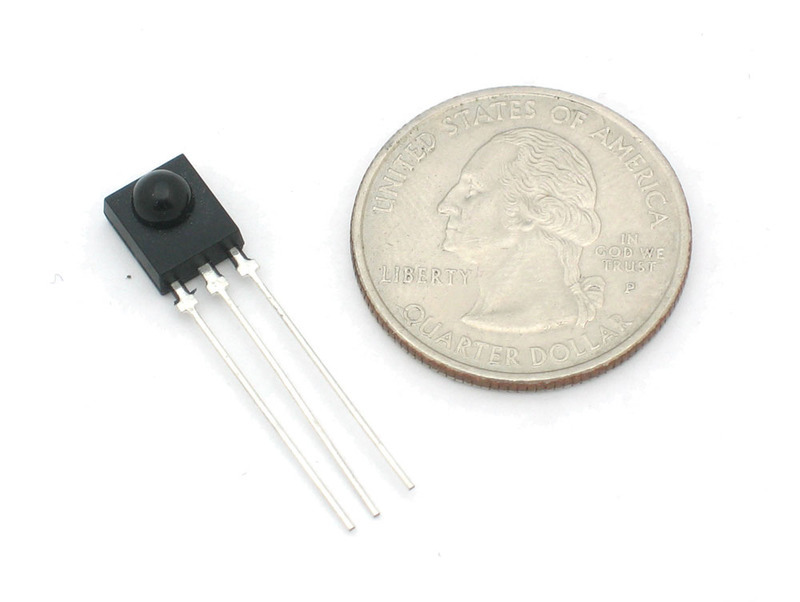 IR detectors are little microchips with a photocell that are tuned to listen to infrared light. They are almost always used for remote control detection - every TV and DVD player has one of these in the front to listen for the IR signal from the clicker. Inside the remote control is a matching IR LED, which emits IR pulses to tell the TV to turn on, off or change channels. IR light is not visible to the human eye, which means it takes a little more work to test a setup.

There are a few difference between these and say a CdS Photocells:

In this tutorial we will show how to

These stats are for the IR detector in the Adafruit shop also known as PNA4602. Nearly all photocells will have slightly different specifications, although they all pretty much work the same. If there's a datasheet, you'll want to refer to it

What You Can Measure

As you can see from these datasheet graphs, the peak frequency detection is at 38 KHz and the peak LED color is 940 nm. You can use from about 35 KHz to 41 KHz but the sensitivity will drop off so that it wont detect as well from afar. Likewise, you can use 850 to 1100 nm LEDs but they wont work as well as 900 to 1000nm so make sure to get matching LEDs! Check the datasheet for your IR LED to verify the wavelength.