How To Take Great Photos of Your Projects One-Light Setup
Feedback? Corrections? 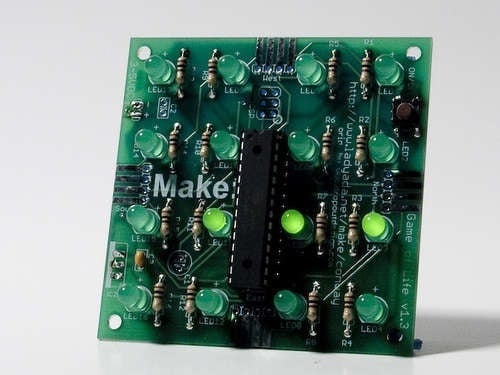 The next configuration we’re going to use requires one light and a few reflectors. While this sounds limiting, it’s actually got a lot of flexibility. The natural world is, after all, basically one light (the sun) and a reflector (the sky). The reflectors are the key. Much of the light radiated by a light source is wasted, traveling in directions that contribute nothing to the photo. Reflectors help bounce (and sometimes diffuse) that light back onto the subject, filling in shadows and highlighting critical areas.

There are two reflector types we’ll be using, and they each do different things. 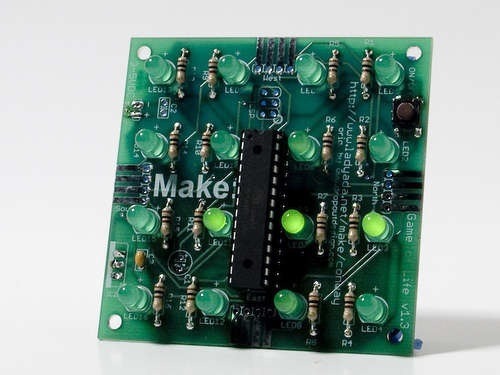 White panel reflector (off to right)

The first is a diffused panel, which is basically a piece of white cardboard or foamcore.

The second is a mirror. We use each of these reflectors for a different purpose, but rather than detail each purpose now, I’ll explain them individually as we introduce them to the set up.

First, the light. Place the light at about 3 feet above the surface of the table. Set it 4 feet away and at the 9 o’clock position (off to your left), and pointed at the subject. Leave enough room to move it ±1ft towards or away from you later.

There’s always the temptation to put the light as close as possible to the table. While this does increase the amount of light, it is very uneven illumination — the gradation from light to dark across the background (and even the subject) can be very noticeable. This is due to the nature of light as electromagnetic radiation, which means it is governed by the inverse square law. I won’t go in to calculations here, but it’s best to remember that the closer the light is to the subject, the higher the contrast between light and shadowed areas. When you move the light away a bit, things tend to “even out” a lot more — it also makes it easier to work because you don’t have a hot, high-wattage incandescent light right in your face.

If you look at the overhead photos, you’ll see where each reflector is placed for this particular setup. Naturally, every subject will require a different placement of the mirrors, and some may not require you to use all three. There’s a lot of trial and error here. Set up your subject in the “pose” you like, light it, and then add and move the reflectors around until you get what you like. 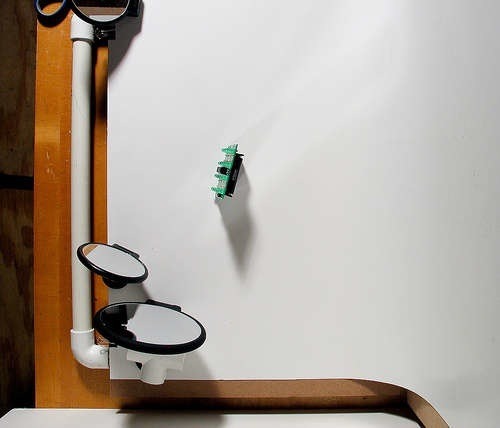 With the light in position, we’re going to introduce the reflectors. The first reflector is a diffusion panel (sometimes called a white card). 1/4” white foamcore works great for this best because it’s lightweight and rigid, but you can use any sort of white panel. You’re going to prop it up on the right side of the subject, about 12” away. If you’re using the cyc, you can just lean it against the side as in the photo. Watch the shadows cast by the subject darken and lighten as you remove and replace it in position. Our goal with the reflectors is to lower the contrast ratio, which is the proportion of the lightest part of the scene to the darkest part. Digital cameras have problems resolving higher contrast scenes, and so we need to bring the contrast down to a level where it can record everything. If you move the reflector away from the subject, the contrast increases, while moving it closer causes it to decrease. 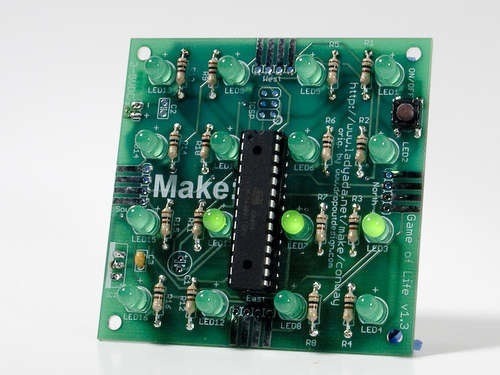 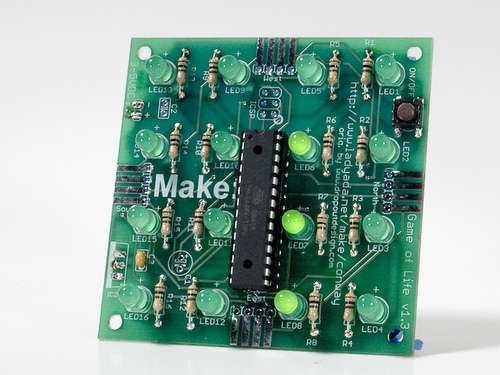 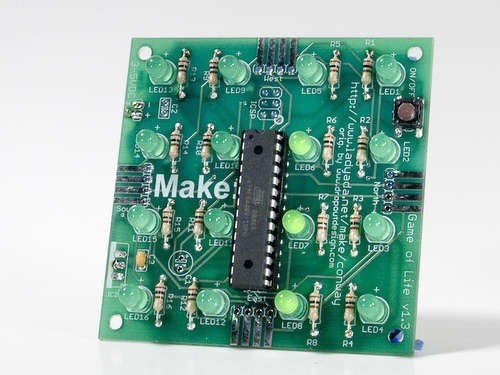 Next we’ll introduce the mirrors. I have three mirrors, one big one (5”) and two small ones (3”). These are the kind you can get at a discount store — make-up mirrors with a collapsible handle that allows you to stand them up on a table. They usually have mirrors on both sides — one is flat and the other is concave. The small ones cost about $3. Buy them in black if you can.

Where the mirrors go in your setup depends on the subject. You want to look for spots on the subject that look particularly dark, and use the mirrors to fill them in. Start with the largest mirror. Think of this as starting with a broad brush and working your way down to a fine tip for the details.

Looking at the photo with just the white panel, we see that the lower-right side of the subject is still much too dark. We need a significant amount of fill here, so we use the large 5” mirror to bounce some light back onto our subject. (photo & overhead #3).

Now we’ve lightened up the lower right a bit, but the area around the chip is still too dark, so we add another reflector off to the left of the camera to throw some light in that area. Note that this mirror is set at a rather shallow angle, in order to catch the light from the source and reflect it to where we need it. (photo & overhead #4) 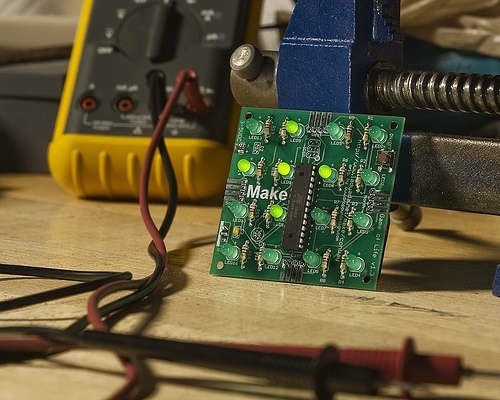 I shot this on my workbench with one light off to the left, and two reflectors (mirrors) filling some of the shadows.

Finally, we still need some light to the right of the microcontroller, around LED7. So we put the last small mirror to the left of the big one and lighten this area up a bit (photo & overhead #5). Then we take the photo, and we’re done!

See the whole thing in action:

Temporarily unable to load embedded content:
http://www.youtube.com/watch?feature=player_embedded&v=rAHOYnQkOo0
Just one note: like anything worthwhile, it takes a while to get good at doing this. You need to practice and change things up now and then in order to learn what looks good and what doesn’t. And you don’t have to stick to the cyclorama as a background either — you can use any tabletop/background, provided you have the room to move the lights and reflectors around. Take a look at the last photo in this section. I did that one on my workbench with one light and two reflectors. I actually like it more than most cyc shots, because it has context. So don’t be afraid to play around and find what you like.
Tips for Taking Pictures Tips for LEDs