In addition to the Circuit Playground board you'll need a fidget spinner of some sort.  The fidget spinner craze is in full force so check local convenience stores, department stores (Walmart, etc.) and you should be able to find one locally.  Or check Amazon for many, many types of fidget spinners.

For the Arduino version of this project you can optionally connect a little LED backpack to display the speed of a spinner instead of using Arduino's built in serial monitor.  To add the LED backpack display you'll need these parts:

Once you have your Circuit Playground board be sure to follow its guide to setup the Arduino IDE to program the board:

If you're connecting a display to your Circuit Playground be sure to follow its guide too to learn how to solder the display to its backpack and configure Arduino to use its software library:

Then connect the display to your Circuit Playground as follows: 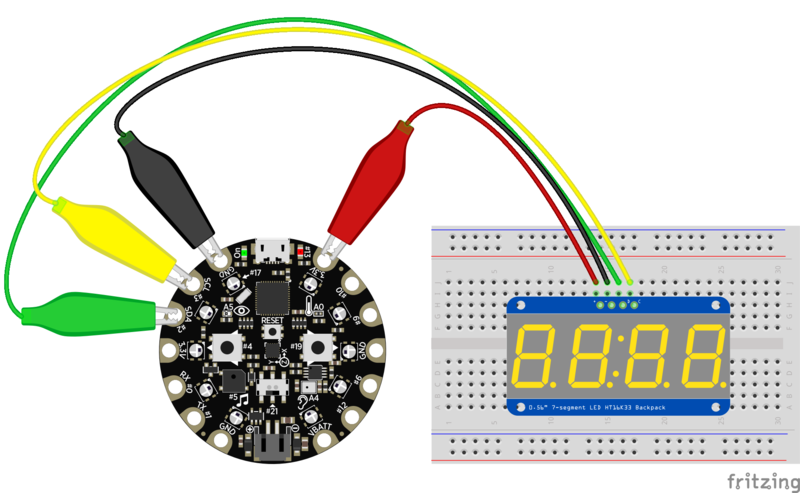 Continue on to learn about installing and running the software sketch for this project.

The software for the fidget spinner tachometer is an Arduino sketch that's included in the Adafruit Circuit Playground library.  Make sure you've installed the Adafruit Circuit Playground library, either using the Arduino library manager or with a manual installation from its source on Github.  If you already have the library installed be sure to use Arduino's library manager to update the library to the latest version so you get the most recent example sketch code.

Next look for the tachometer or tachometer_led_display examples in the Adafruit Circuit Playground library in Arduino: 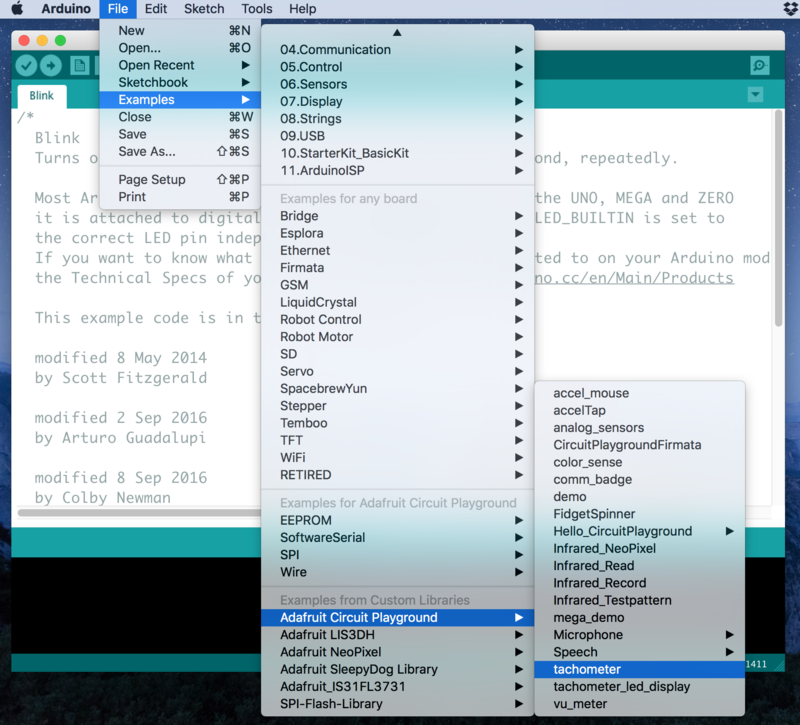 The tachometer example will detect the speed of a fidget spinner and just print it out on the serial monitor, and the tachometer_led_display example will do the same but also print the speed on a connected 7-segment LED backpack display.  Open the appropriate example for your hardware setup.

If you don't see the tachometer examples be sure to update your Circuit Playground library to the latest version!

In particular the SPINNER_ARMS configuration define might need to be adjusted based on the number of arms on the fidget spinner you're using with the sketch.  Set this value to the number of arms or protrusions from the spinner.  The sketch uses this value to correctly determine the speed of an entire revolution of the spinner.  If you just want to see the speed of a single arm moving by the sensor (or are unsure how many arms are on your spinner) try setting this to a value of 1 to get the raw spinning speed.

When you're ready to use the tachometer upload it to your Circuit Playground board.  Once uploaded you should see the first three NeoPixels turn on to bright white color.  Then open the serial monitor at 115200 baud and you're ready to detect the speed of a spinner.

Flick a fidget spinner to get it moving very quickly and then hold it perpendicular (i.e. at a 90 degree angle) to the Circuit Playground board right above the light sensor (the light sensor is right below the 3 lit up NeoPixels and has a little eye symbol printed on the board).  Hold the spinner as close to the sensor as you can without it hitting the board.  Now look at the serial monitor output and you should see the detect speed printed out every second!

If you're holding your spinner in front of the sensor and not seeing any output from the serial monitor you might need to adjust the THRESHOLD define at the top of the sketch and try again.  Try lowering the threshold to smaller value like 300 or 200.  The lower you make the threshold the more sensitive the tachometer, however one the threshold is too low it might be too sensitive and detect random noise as speed.

If you're using the tachometer_led_display example you should see it print the frequency, or speed of the spinner in revolutions per second, on the display in addition to the serial monitor.  If you don't see the display printing the speed but do see it output in the serial monitor double check your LED backpack wiring.

That's all there is to using the fidget spinner tachometer example!  Check out the video about this project to learn how the tachometer works, specifically how it uses reflections of light hitting the light sensor to determine the speed of the spinner.  The sketch performs a simple frequency detection by counting how often the light sensor signal changes during a short period of time.

In addition to Arduino you can also build a fidget spinner tachometer with Circuit Playground Express and CircuitPython.  This Python-powered tachometer works just like the Arduino version and can detect the speed of a spinner held in front of the board's light sensor.  However instead of using low level Arduino programming code this tachometer is programmed with simpler Python code!

After you've loaded CircuitPython onto the board you should see it appear as a USB drive named CIRCUITPY when connected to your computer.  This is where you can copy Python code and other files for the board to run.

Next download the code for this project below and save it as a main.py file on the board's CIRCUITPY drive:

You can also grab this code from a gist on GitHub.

Make sure both neopixel.mpy and the above code saved as main.py are on the board's filesystem, it should look something like this: 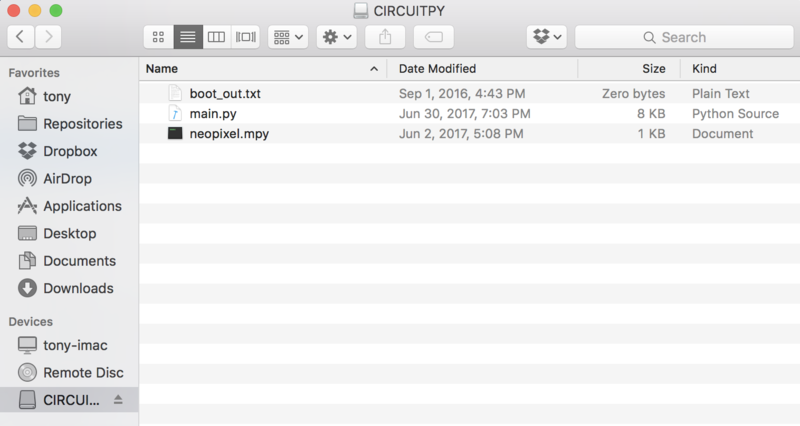 Once the main.py file is copied to the board it should restart and run the tachometer code.  You'll see the first three NeoPixels light up bright white to indicate the board is ready to detect the speed of a fidget spinner.  If you don't see the lights turn on then eject the CIRCUITPY drive, disconnect the board, and reconnect it to your computer to reset it.

Once the code is running and the lights are lit up you can open the board's serial terminal at 115200 baud.  Hold a spinning fidget spinner in front of the light sensor and you should see the speed printed out every second.  You need to hold the spinner very close to the light sensor to make sure it can get a good reading.  Watch the video at the top of this page to see an example of using the tachometer.

That's all there is to the CircuitPython version of the fidget spinner tachometer! 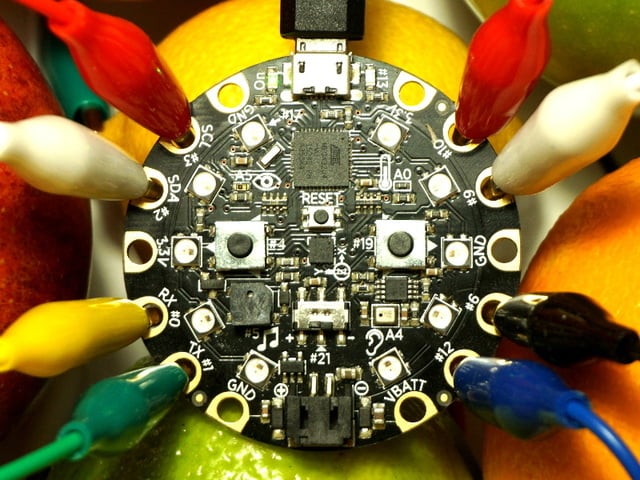