In this step, we'll take care of the wiring which involves components mounted in the enclosure.  This will result in a lot of loose wires which we'll connect to the Metro/Wave Shield/Proto Shield stack later on.

To avoid confusing wires later, bundle each set of wires using a piece of electrical as you finish each step.

Strip the insulation from a long piece of solid core wire and solder it to the middle row of pushbutton pins as seen below - this will be our connection to ground on the Metro.

Strip and tin five lengths of stranded wire and solder them securely to each pushbutton bottom pin.  If possible, use a different color wire for each button and black for the ground bus connection.

Once the buttons are wired, mount them back in the enclosure using the original screws.

Next, we'll connect 2-XL's internal speaker to the output of the Wave Shield. Strip and tin two lengths of stranded wire and solder them to the speaker.  Use a light color wire for the speaker's positive terminal connection and a darker color for the negative terminal. 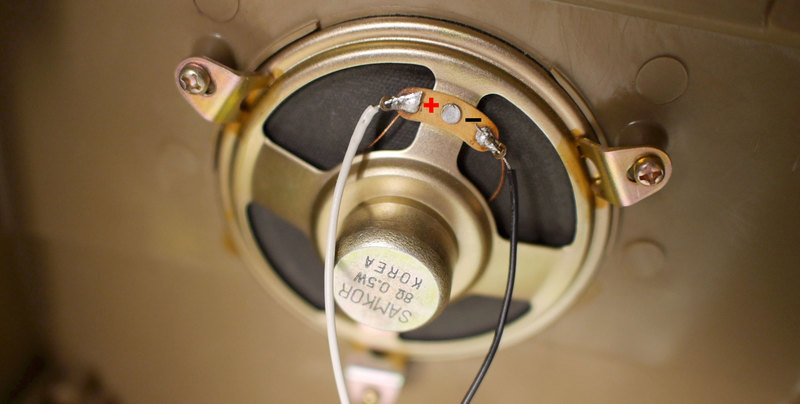 2-XL's preexisting power supply is capable of powering the Metro, so we can use it to power our project. We'll also use the switch in 2-XL's volume potentiometer to turn power on/off.

Route the power jack's ground connection from the jack's sleeve terminal to the potentiometer's switch using black wire stranded or solid core wire. Solder a longer piece of black stranded core wire to the remaining switch terminal and a long piece or red wire to the jack's positive terminal - these last two wires will be supplying power directly to the Metro.

Next we'll replace 2-XL's eye & power LEDs with brighter modern versions.  The Power LED will stay lit as long as the Metro is on. The two eyes will be wired in series and will flash in sync with the audio output.

The LEDs are held in place with melted plastic retainers.  These are relatively easy to remove by rocking from side to side until they're free from the white faceplate.  Remove each retainer, replace each LED with a new red 5mm LED - orient them with the shorter lead (negative/cathode) to the left and the longer lead (positive/anode) to the right. 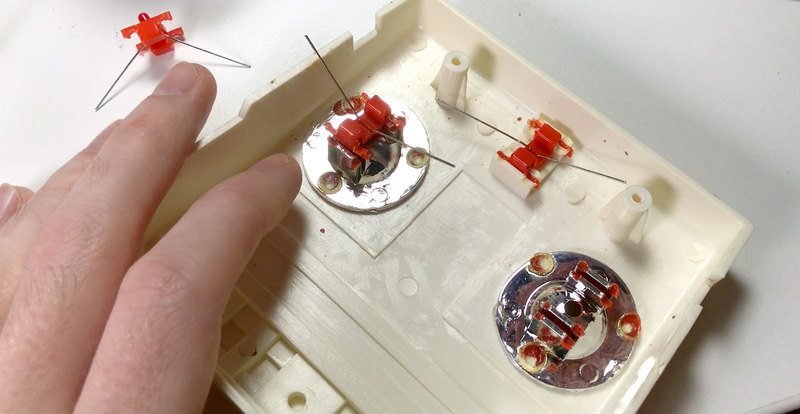 Press the retainer clips back in place and bend each LED's leg outward. Bend the tip of each lead at a right angle to provide a hook for wires during soldering.

To wire the eyes in series, solder a short piece of wire connecting the anode of 2-XL's right eye to the cathode of the left eye. Solder long pieces of wire to the remaining LEDs as seen below. 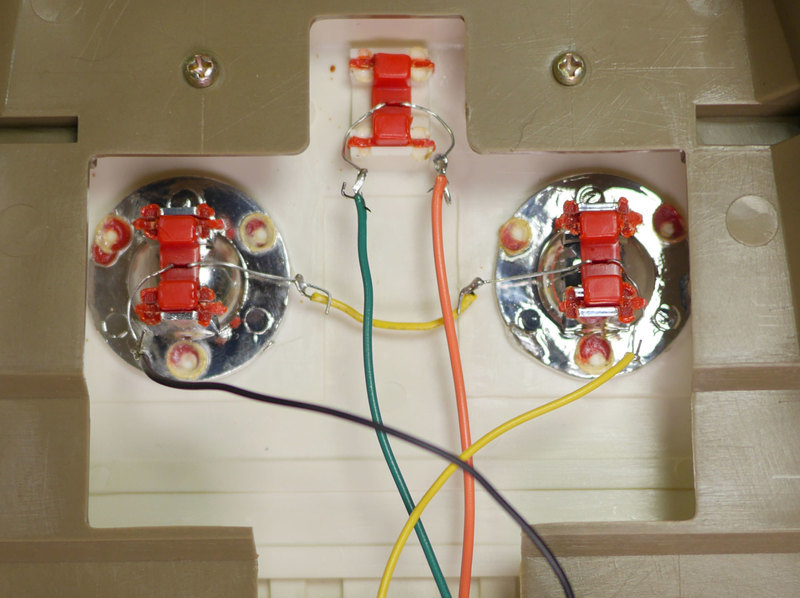 To accommodate the jack we can widen one of the screw holes which was used to keep the 8-track assembly in place. Use a 6mm drill bit to drill out the hole til the jack fits snugly.