Flip-flops are the basic piece of sequential logic. They effectively store a single binary digit of state. There are a variety of flip-flops available that differ on how that state is manipulated.

Since a flip-flop stores a binary digit it must, by  definition, have 2 states. Furthermore it is bistable, which means it is stable in each state: when is put in a specific state, it will stay in that state until something causes it to change to the other state.

This Flip-Flop has two inputs that change its state: Reset and Set.

When both R and S are high the Flip-Flop is stable and doesn't change.

R and S can not be both low at the same time. Both Q and /Q would be high... something about ripped space-time and imploding realities...

An R-S Flip-Flop is simple. We can build one from half of a 7400 NAND gate chip. The circuit below shows how.  Go ahead, build it and play with it. I'll wait.  The pulse input and LED output boards from part 2 are handy for providing pulse input and watching the output of this, but you can hand wire some push-buttons and LEDs (with resistors!). Note that debouncing isn't a concern in this application, since multiple low input pulses have no effect, it's just the first one that counts. Using the I/O boards just means less wiring to do for a quick experiment. 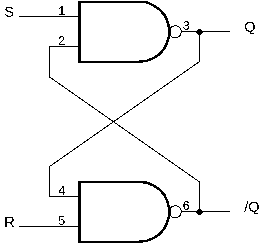 Both R and S are, by default, high. If R goes low, the output of it's NAND gate goes high regardless of the other input (attached to Q). So /Q is high. That means that both inputs of the other NAND gate are high (since S will be high), making it's output (Q) low. That low value feeds back to the R gate so that when R returns to it's resting high value, it's gate's output stays high. If S goes low, the opposite happens with Q going high, making /Q low (since R is also high). The low /Q will hold the output of the S gate high.

Since things happen with R or S are low, they are active-low inputs.  If we wanted the opposite, i.e. active-high inputs, an inverter would be added to each input.

This Flip-Flop is a sequential circuit. It is not, however, a synchronous circuit. The state change happens whenever R or S go low. We can make it synchronous quite simply. What we have to do is gate R and S using another input: the clock. We can use the other two NAND gates for this. 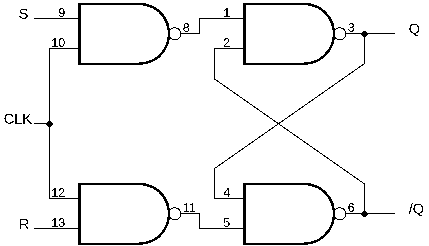 When the CLK input is low, both of the gating NANDs output high. When CLK is high, the S and R inputs are passed through the gate NANDs and inverted. So if S is high, the set input to the Flip-Flop will be low, setting it.  Similarly with the R input.

Note that because of the inversion done by the gating NANDs, the inputs to the circuit as a whole are now active-high.

The above clocked R-S Flip-Flop is level triggered; this the CLK input being high that is relevant. As long as CLK is high, the R and S inputs can change the state of the Flip-Flop. Sometimes this is fine, but often we want that window of change to be limited to the instant CLK transitions from low to high or as close as possible to it. If CLK stays high, R and S have no effect after the initial change of CLK. This is what we mean when we say the circuit is edge triggered. It's the rising edge of CLK that is relevant. Specifically, it's the values of R and S at the instant the rising edge occurs.

We can convert the above level triggered circuit into an edge triggered one with an inverter and an AND gate. 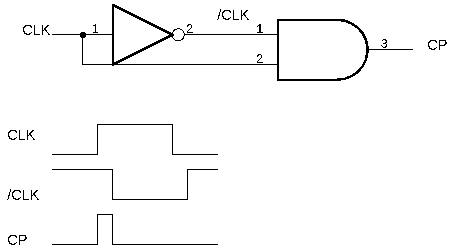 If we now slap this edge detector on the CLK input of the level triggered Flip-Flop, its R and S inputs are used to effect its state during that brief pulse. We now have an edge triggered R-S Flip-Flop.

If we look at the timing diagram above, we see that the pulse is high for the short time both CLK and /CLK are high. A similar thing happens when CLK switches back to low. The /CLK signal lags slightly so there is a period of time when both are low. If we switch the AND gate for a NOR gate we get a short pulse then.  Thus we can make a falling edge detector as well. Given that, we have the choice of triggering out R-S Flip-Flop on the rising or falling edge of CLK.

Secondly, instead of the case where both inputs are active being illegal, it causes the state to toggle.

It's common for a flip-flop to have a way to set Q to either high or low independent of all other inputs. Set will make Q high (and /Q low) regardless of whatever else might be going on. Conversely Clear will set Q to low (and /Q to high). Having Set and Clear both active at the same time is not a valid situation... that thing about holes in space-time and imploding realities...

One way to think about Set and Clear is as a reset that puts the flip-flop into a known initial condition (0 or 1 depending on which signal is used). It can be used and abused in other ways as well, typically to reset a group of flip-flops when certain conditions occur.

As these flip-flops get more complex, we seldom draw out the gate level circuit. Also, flip-flops are easily available packaged into ICs so it is natural to drop them into a design as a unit. The 7473A and 7476A are two example of J-K flip-flops. the '73 has a clear input, while the '76 has set and clear.  Be careful of the '73... it has power & ground pins in unusual locations. The 74107 has the same functionality with power and ground in the usual locations. 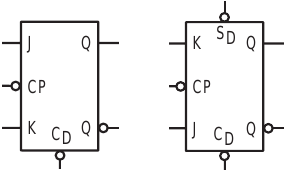 This is a simple one. On the active edge of the T input (rising or falling) the flip-flop's state and Q (and /Q) output toggles.

One neat thing about a T flip-flop is that it will divide whatever clock signal you apply to it by 2. You can chain several T flip-flops together to divide the incoming clock by 2, 4, 8, etc.

The D flip-flop is basically a single bit storage cell. In this respect it is little different than any of the other flip-flops we've looked at; it is differentiated by its simplicity. It has a single input D that is used to set the state on the appropriate clock edge. As usual, Q and /Q reflect that state. That's all there is to it.  The 7474 is the canonical D flip-flop.

It provides Set and Clear inputs as described above, and otherwise the state of the flip-flop only changes on the falling clock edge. 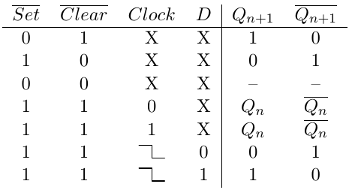 Now that we know all about flip-flops, we can look at some things we can use them for.