Skip to main content
Getting Started with Custom Extensions for MakeCode Creating your Extension
This tutorial may be outdated. It is no longer recommended for beginners, and may need modifications to code or hardware that is not indicated in the tutorial.

First, you need a GitHub account if you don't have one yet. GitHub is the largest host of source code in the world, with over 30 million users.

Once you have your account, you'll need to tie the MakeCode web app to your account. To do that,

Once you've stored your token,

Additionally, the Import URL option will now support https://github.com/... URLs, which is useful if you can't find your repository in the list (especially organizational repos), or as way to search the list faster using a copy/paste of the URL. 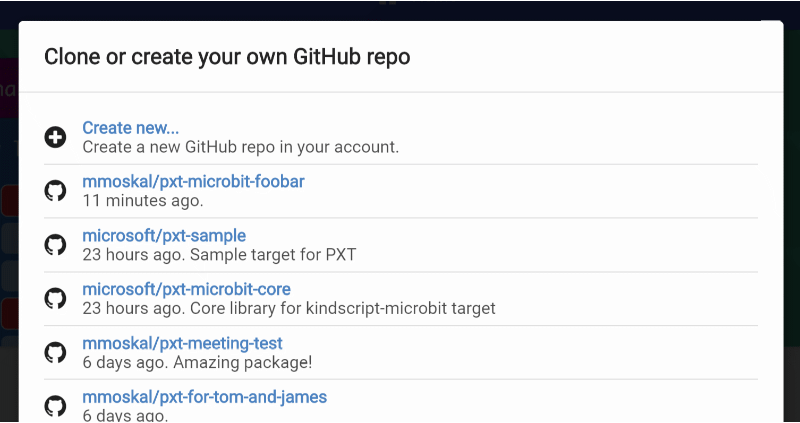 If you import a completely empty repo, or create a fresh one, MakeCode will automatically initialize it with pxt.json and other supporting files. If you import a non-empty repo without the pxt.json file, you will be asked if you want it initialized. Note that this might overwrite your existing files.

Currently, there is no way to push an existing project into GitHub. As a workaround, create a new project and copy/paste the contents of the main.ts file.

Once you have your repo set up, edit files as usual. Whenever you get to a stable state, or just every now and then to keep history and insure against losing your work, push the changes to GitHub.

The button will check if there are any pending changes to check in. If there are, it will create a commit, pull the latest changes from GitHub, merge or fast-forward the commit if needed, and push the results to GitHub.

If there are changes, you will be asked for a commit message. Try to write something meaningful, like Fixed temperature reading in sub-freezing conditions or Added mysensor.readTemperature() function.

When describing changes, you are also given an option to bump the version number. This is a signal that the version you're pushing is stable and the users should upgrade to it. When your extension is first referenced, the latest bumped version is used. Similarly, if there is a newer bumped version, a little upgrade button will appear next to the extension. Commits without bump are generally not accessible to most users, so they are mostly for you to keep track of things.

There's really no distinguishing between a commit, push, and pull - it all happens at once in the sync operation.

You can view a history of changes by following the version number link on the Project Settings page.

There's also another button next to the GitHub sync - you can use it to add new files to the project. This is mostly to help keep the project organized. For the TypeScript compiler it doesn't matter if you use one big file or a bunch of smaller ones.

Typically, two people would sync a GitHub extension at the same version, and then they both edit it. The first person pushes the changes successfully. When MakeCode tries to push the changes from the second person, it will notice that these are changes against a non-current version. It will create a commit based on the previous version and try to use the standard git merge (run server-side by GitHub). This usually succeeds if the two people edited different files, or at least different parts of the file - you end up with both sets of changes logically combined. There is no user interaction required in that case.

If the automatic merge fails, MakeCode will create a new branch, push the commit there, and then create a pull request (PR) on GitHub. The dialog that appears after this happens will let you go to the GitHub web site and resolve the conflicts. Before you resolve conflicts and merge the PR, the master branch will not have your changes (it will have changes from the other person, who managed to commit first). After creating the PR, MakeCode moves your local version to the master branch (without your changes), but don't despair they are not lost! Just resolve the conflict in GitHub and sync to get all changes back. MakeCode will also sync automatically when you close the PR dialog (presumably, after you resolved the conflict in another tab).

Introduction to Extensions Test your Extension