We saw that decoders, multiplexers, and demultiplexers  all deal with (depending on which they are) a single input or output corresponding to a selection number. Converters are similar on the surface: there's a set of input signals that represent a value (i.e. a binary number) and some outputs. Where they differ is that the input value isn't used to select one of the outputs; all the outputs are always relevant/significant.  A converter does just what the name implies: convert one set of values to another. They embody a function in that you put a bit pattern in and get a corresponding bit pattern out.

A good example of a converter is a BCD* to 7-segment converter. Each group of 4 binary digits directly represents a single decimal digit. As such it can be converted to a pattern to be displayed on a 7-segment display. 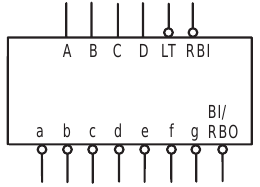 The DCBA inputs make up the value, 0-9, to convert. The a-g outputs connect to the segments in a 7-segment LED display. This input labelling is somewhat different than the use of A0, A1, A2, and A3 that we've seen previously.  You'll find that there isn't just one standard naming convention. Sigh.

Don't worry about the LT, R, RBI, and RBO signals. They provide support for blanking leading and/or trailing zeros and aren't involved in the actual conversion.

If we look inside the chip, we can see that it uses simple gates that we have seen plenty of: NOT, AND, and NOR (the ANDs with inverted inputs). 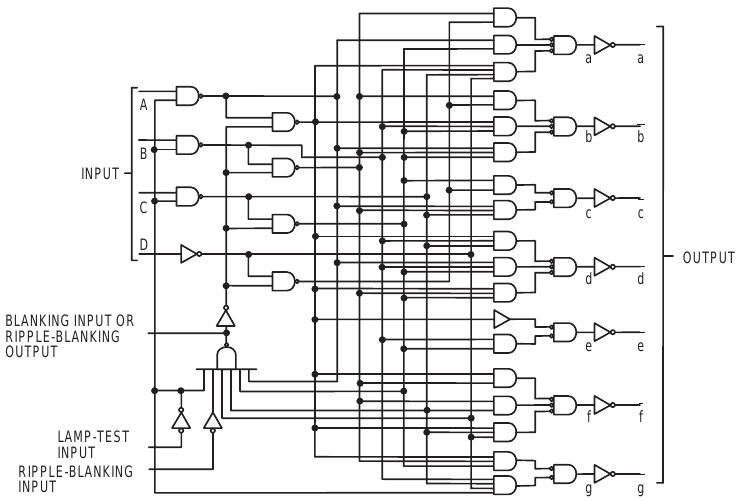 This version of the BCD to 7-segment converter has the advantage in that it is designed to directly drive the LEDs by including output drivers. This makes the resulting circuit very simple.

* BCD: Binary Coded Decimal uses 4 binary digits to store a single decimal digit, i.e numbers 0-9. Each subsequent 4-bit group (usually called a nybble) represents a separate decimal digit. The decimal number 3571 would be represented in binary as 0x110111110011, but in BCD as 0b0011010101110001. Not nearly as concise but it does have advantages when decimal numbers (especially the input and output of them) are the focus.