Skip to main content
Circuit Playground: C is for Capacitor What is a capacitor?
Feedback? Corrections?

What is a capacitor? 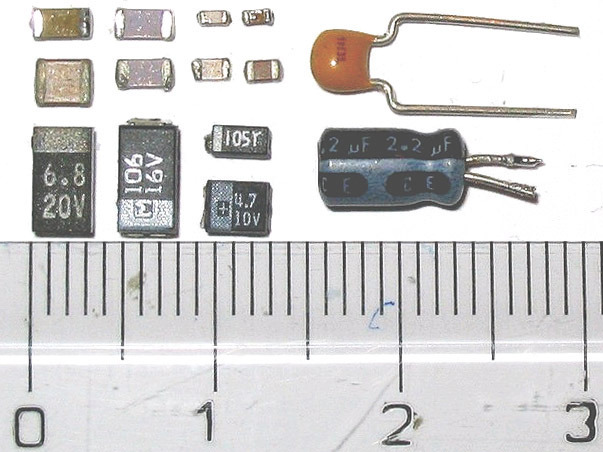 A capacitor (originally known as a condenser) is a passive two-terminal electrical component used to store energy electrostatically in an electric field. The forms of practical capacitors vary widely, but all contain at least two electrical conductors (plates) separated by a dielectric (i.e., insulator). The conductors can be thin films of metal, aluminum foil or disks, etc. The 'nonconducting' dielectric acts to increase the capacitor's charge capacity. A dielectric can be glass, ceramic, plastic film, air, paper, mica, etc. Capacitors are widely used as parts of electrical circuits in many common electrical devices. Unlike a resistor, a capacitor does not dissipate energy. Instead, a capacitor stores energy in the form of an electrostatic field between its plates.

When there is a potential difference across the conductors (e.g., when a capacitor is attached across a battery), an electric field develops across the dielectric, causing positive charge (+Q) to collect on one plate and negative charge (-Q) to collect on the other plate. If a battery has been attached to a capacitor for a sufficient amount of time, no current can flow through the capacitor. However, if an accelerating or alternating voltage is applied across the leads of the capacitor, a displacement current can flow.

An ideal capacitor is characterized by a single constant value for its capacitance. Capacitance is expressed as the ratio of the electric charge (Q) on each conductor to the potential difference (V) between them. The SI unit of capacitance is the farad (F), which is equal to one coulomb per volt (1 C/V). Typical capacitance values range from about 1 pF (10−12 F) to about 1 mF (10−3 F).

The capacitance is greater when there is a narrower separation between conductors and when the conductors have a larger surface area. In practice, the dielectric between the plates passes a small amount of leakage current and also has an electric field strength limit, known as the breakdown voltage. The conductors and leads introduce an undesired inductance and resistance.

Capacitors are widely used in electronic circuits for blocking direct current while allowing alternating current to pass. In analog filter networks, they smooth the output of power supplies. In resonant circuits they tune radios to particular frequencies. In electric power transmission systems they stabilize voltage and power flow. 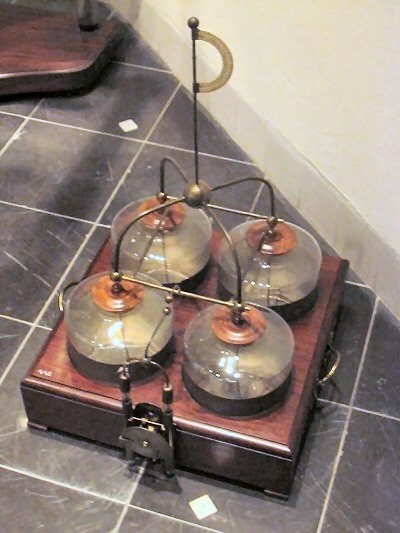 In October 1745, Ewald Georg von Kleist of Pomerania in Germany found that charge could be stored by connecting a high-voltageelectrostatic generator by a wire to a volume of water in a hand-held glass jar.[2] Von Kleist's hand and the water acted as conductors, and the jar as a dielectric (although details of the mechanism were incorrectly identified at the time). Von Kleist found that touching the wire resulted in a powerful spark, much more painful than that obtained from an electrostatic machine. The following year, the Dutch physicist Pieter van Musschenbroek invented a similar capacitor, which was named the Leyden jar, after the University of Leiden where he worked.[3] He also was impressed by the power of the shock he received, writing, "I would not take a second shock for the kingdom of France."[4]

Daniel Gralath was the first to combine several jars in parallel into a "battery" to increase the charge storage capacity. Benjamin Franklininvestigated the Leyden jar and came to the conclusion that the charge was stored on the glass, not in the water as others had assumed. He also adopted the term "battery",[5][6] (denoting the increasing of power with a row of similar units as in a battery of cannon), subsequently applied toclusters of electrochemical cells.[7] Leyden jars were later made by coating the inside and outside of jars with metal foil, leaving a space at the mouth to prevent arcing between the foils.[citation needed]The earliest unit of capacitance was the jar, equivalent to about 1 nanofarad.[8]

Leyden jars or more powerful devices employing flat glass plates alternating with foil conductors were used exclusively up until about 1900, when the invention of wireless (radio) created a demand for standard capacitors, and the steady move to higher frequencies required capacitors with lowerinductance. A more compact construction began to be used of a flexible dielectric sheet such as oiled paper sandwiched between sheets of metal foil, rolled or folded into a small package.

Early capacitors were also known as condensers, a term that is still occasionally used today. The term was first used for this purpose by Alessandro Volta in 1782, with reference to the device's ability to store a higher density of electric charge than a normal isolated conductor.[9]

Circuit Playground: F is for Frequency
By Collin Cunningham
16
Beginner

Circuit Playground - A is for Ampere
By lady ada
47
Beginner
×