CircuitPython ships on many Adafruit products. We regularly create new releases and make it easy to update your installation with new builds.

CircuitPython is meant to be built in a POSIX-style build environment. We'll talk about building it on Linux-style systems or on MacOS. It's possible, but tricky, to build in other environments such as CygWin or MinGW: we may cover how to use these in the future.

If you don't already have a Linux machine, you can set one up in several different ways. You can install a Linux distribution natively, either on its own machine or as a dual-boot system. You can install Linux on a virtual machine on, say, a Windows host machine. You can also use Windows Subsystem for Linux (WSL), available on Microsoft Windows 10, which allows you to run a Linux distribution with an emulation layer substituting for the Linux kernel.

We recommend using the Ubuntu distribution of Linux or one of its variants (Kubuntu, Mint, etc.). The instructions here assume you are using Ubuntu. The 20.04 LTS (Long Term Support) version is stable and reliable.

Linux on a Virtual Machine

Linux can also be installed easily on a virtual machine. First you install the virtual machine software, and then create a new virtual machine, usually giving the VM software a .iso file of Ubuntu or another distribution. On Windows, VM Workstation Player and VirtualBox are both free and easily installed.

Vagrant is software that is designed to make it easy to set up and use pre-configured virtual machines. There are potential stumbling blocks. This guide will include Vagrant information in the future.

The Ubuntu 20.04 LTS Desktop distribution includes most of what you need to build CircuitPython. First, in a terminal window, do:

Next you need to download and unpack the ARM gcc toolchain from its download page. ARM is no longer updating its Ubuntu "ppa" (private package archive), so you need to install these manually. For CircuitPython 5 and 6 development we are using the 9-2019-q4-major version. CircuitPython 4 was built with the 7-2018q2-update version. These downloads are .bz2 archive files.

Next, add a line to your .bash_profile or other startup file to add the unpacked toolchain executables to your PATH. For example:

Open a new terminal window, and see if you now have the correct executables on your path:

Now move to the Build CircuitPython section of this guide.

To build CircuitPython on MacOS, you need to install git, python3, and the ARM toolchain. The easiest way to do this is to first install Homebrew, a software package manager for MacOS. Follow the directions on its webpages.

Now install the software you need:

And finally, install the ARM toolchain (note the cask):

Once the dependencies are installed, we'll also need to make a disk image to clone CircuitPython into. By default the Mac OSX filesystem is case insensitive. In a few cases, this can confuse the build process. So, we recommend creating a case sensitive disk image with Disk Utility to store the source code. The disk image is a single file that can be mounted by double clicking it in the Finder. Once it's mounted, it works like a normal folder located under the /Volumes directory.

That's it! Now you can move on and actually Build CircuitPython.

Windows Subsystem for Linux (WSL) is a feature of Windows 10 that lets you run Ubuntu and other versions of Linux right in Windows. It's real Ubuntu, without the Linux kernel, but with all the software packages that don't need a graphical interface.

You can build CircuitPython in WSL easily. It's easier to install than a Linux virtual machine. The filesystem access is slower than on regular Linux, so builds will take somewhat longer, but it's quite usable.

To install WSL, you need to be running a recent version of 64-bit Windows 10. Go to Control Panel > Programs >Windows Features, and check the box for Windows Subsystem for Linux. 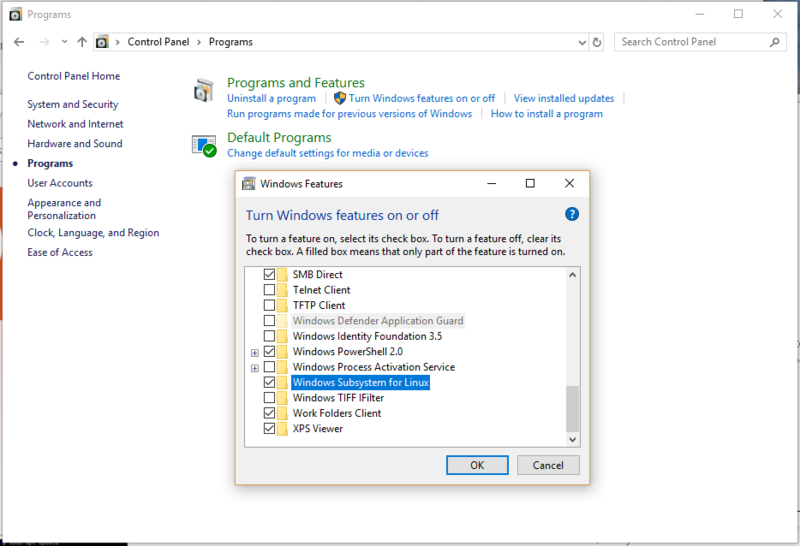 After that, you'll have to reboot Windows. After it's rebooted, go to the Microsoft Store, search for Ubuntu, and install it. 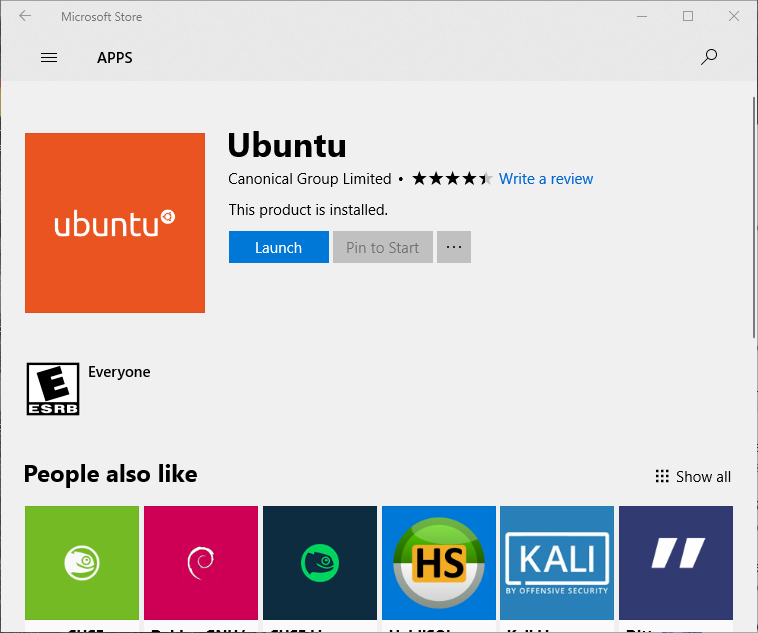 This step is the same as for regular 18.04 Ubuntu, so refer to that page, and then come back here.

You can copy files to and from Windows through the /mnt/c. For instance, if you want to copy a CircuitPython build to the desktop, do:

You might be tempted to clone and build CircuitPython in a folder shared with the Windows filesystem (in /mnt/c somewhere). That can cause problems, especially if you use git commands on the Windows side in that folder. The CircuitPython build assumes case-sensitive filenames, but Windows usually ignores filename case differences. You may also have line-ending problems (CRLF vs.  LF). It's better to clone and build inside your home directory in WSL, and copy files over to a shared folder as needed.

Mounting a CircuitPython Board in WSL

You can mount your ...BOOT or CIRCUITPY drive in WSL. Create a mount point and then mount it. Note that you'll have to remount each time the drive goes away, such as when you restart the board or switch between the BOOT drive and CIRCUITPY. So it's probably more convenient to copy files to the board from Windows instead of WSL.

If the setup instructions above don't work for your particular OS setup, for whatever reason, you can get the ball rolling by installing these tools in whatever way you can and then getting them to work with the Makefile in circuitpython/ports/atmel-samd. (main branch):

Fetch the Code to Build

Once your build tools are installed, fetch the CircuitPython source code from its GitHub repository ("repo") and also fetch the git "submodules" it needs. The submodules are extra code that you need that's stored in other repos.

In the commands below, you're cloning from Adafruit's CircuitPython repo. But if you want to make changes, you might want to "fork" that repo on GitHub to make a copy for yourself, and clone from there.

Build the mpy-cross compiler first, which compiles Circuitpython .py files into .mpy files. It's needed to include library code in certain boards.

Now you're all set to build CircuitPython. If you're in the master branch of the repo, you'll be building the latest version. Choose which board you want to build for. The boards available are all the subdirectories in ports/atmel-samd/boards/.

By default the en_US version will be built. To build for a different language supply a TRANSLATION argument.

Copy firmware.uf2 to your board the same way you'd update CircuitPython: Double-click to get the BOOT drive, and then just copy the .uf2 file:

The board will restart, and your build will start running.

If you're using a board without a UF2 bootloader, you'll need to use bossac and the firmware.bin file, not the .uf2 file. Detailed instructions are here.

When to make clean

After you make changes to code, normally just doing make BOARD=... will be sufficient. The changed files will be recompiled and CircuitPython will be rebuilt.

However, there are some circumstance where you must do:

If you have changed the #include file structure in certain ways, or if you have defined QSTR's (a way of defining constants strings in the CircuitPython source), then you must make clean before rebuilding. If you're not sure, it's always safe to make clean and then make. It might take a little longer to build, but you'll be sure it was rebuilt properly.

When there are changes in the GitHub repo, you might want to fetch those and then rebuild. Just "pull" the new code (assuming you haven't made changes yourself), update the submodules if necessary, and rebuild:

Those are the basics. There's a lot more to know about how to keep your forked repo up to date, merge "upstream" (Adafruit's) changes into your code, etc. We'll be writing all that up later.

Normally, all imported Python modules in CircuitPython are loaded into RAM in compiled form, whether they start as .mpy or .py files. Especially on M0 boards, a user program can run out of RAM if too much code needs to be loaded.

To ameliorate this problem, a CircuitPython image can include compiled Python code that is stored in the image, in flash memory, and executed directly from there. These are "internal frozen modules". The circuitplayground_express and esp8266 builds use this technique.

If you would like to build a custom image that includes some frozen modules, you can imitate how it's done in the circuitplayground_express build. Look at boards/circuit_playground_express/mpconfigboard.mk:

Notice the FROZEN_MPY_DIRS lines in the file. Pick the mpconfigboard.mk file for the board you are using, and add one or more similar lines. You will need to do add directories for the libraries you want to include. If these are existing libraries in GitHub, you can add them as submodules. For instance, suppose you want to add the Adafruit_CircuitPython_HID library to the feather_m0_express build. Add this line to boards/feather_m0_express/mpconfigboard.mk:

Then add the library as a submodule:

When you add the submodule it will be cloned into the frozen/ directory.

Note that there is limited unused space available in the images, especially in the non-Express M0 builds, and you may not be able to fit all the libraries you want to freeze. You can of course try to simplify the library code if necessary to make it fit.

Like
We are no longer supporting CircuitPython on the ESP8266 as of 4.0.0alpha. You can continue to use 3.x but it will no longer be updated.

The esp8266 board build requires a different toolchain. You must install https://github.com/pfalcon/esp-open-sdk. Follow the directions in the README. Note the caveats for MacOS about case-sensitive filesystems.

Sword that lights up as soon as you touch it!
By Dano Wall

Challenge a friend to see who can 'draw' the quickest.
By Carter Nelson

3D print a mount for your robotics projects
By Ruiz Brothers

5
Beginner
How to use the PCA9685 PWM & servo driver with CircuitPython!
By Tony DiCola