Back in ye olde 2013, Arduino came out with the Arduino Esplora. It was much like an Adafruit Circuit Playground Express and an Adafruit PyGamer rolled into one board. With an add on display, you had about a $100 self-contained handheld device (without a provision for a battery). Few games were made for the Esplora at the time. The author ported two games, Bounce and Pong, and even added an Adafruit MintyBoost to get it portable on a LiPo battery. The cost and the features did not find a market and the Esplora was quietly discontinued.

Fast forward to today: boards with modern microcontrollers and displays are proliferating, thanks to the lowering of costs and environments like MakeCode Arcade, allowing anyone to make graphical games! Several companies are making boards in this format including a number from Adafruit's PyGamer and PyBadge.

I told Ladyada I'd port one of the Arduino games from Esplora to PyGamer and she said "Go for it!". It was not difficult: if your old program used the Adafruit GFX Arduino library (and most Arduino display-based code uses that open source code), you can easily port the game to the modern Adafruit Arcada game libraries which are a superset of Adafruit GFX.

This game was originally written by R0d0t and featured in Hackaday back in 2012. It's been ported to Arcada and the scoring and controls have been improved.

Precompiled versions are available in UF2 format to drop onto your compatible boards.

The original Adafruit PyBadge or PyGamer boards work - an accelerometer is needed so the PyBadge LC is not compatible.

Mini Oval Speaker with Short Wires - 8 Ohm 1 Watt
Hear the good news! This wee speaker is a great addition to any audio project where you need 8 ohm impedance and 1W or less of power. We particularly like...
$1.95
In Stock
Add to Cart

Pink and Purple Braided USB A to Micro B Cable - 2 meter long
This cable is super-fashionable with a woven pink and purple Blinka-like pattern!First let's talk about the cover and over-molding. We got these in custom colors,...
Out of Stock
Out of Stock
Programming 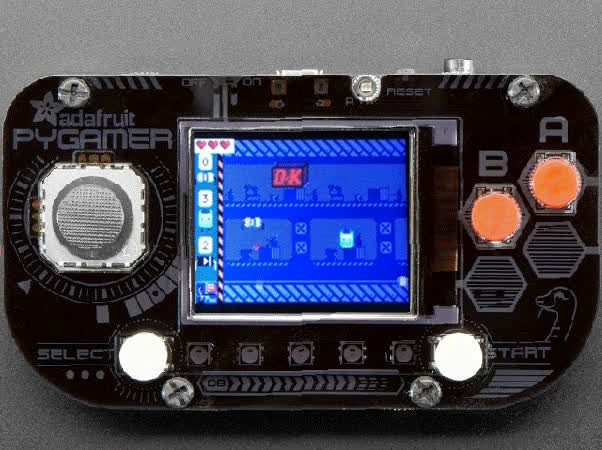