From math to silicon

One neat thing about what we've been discussing so far is that it converts directly into silicon and circuitry.

Earlier we used True (T) and False (F) to indicate logic states. When we talk about actual circuits, it's more typical to talk about high (H) and low (L) signals.There's some leeway as to what voltages are considered high and low, but we can idealise it to high being Vcc and low being Gnd.

Just like any kind of circuits we need a way to describe logic circuits. And just like other circuits, there is an assortment of diagramming symbols we can use. In the same way there are standard symbols for resistors, capacitors, and the like, there are symbols for the different gates (and as well as more complex digital building blocks like counters and shift registers. Semiconductor companies such as Texas Instruments, Motorola, Fairchild, etc. publish "Data Books" on their lines of ICs. I've always found these to be a superb resource for knowing what chips are available, their pinouts, and functional characteristics.

Be sure to learn these symbols, as we will be using them extensively in the guides to come in this series.

If you actually want to follow along and build the circuits we will be exploring, you'll need some logic ICs. I like using TTL (short for Transistor-Transistor-Logic, which refers to an implementation approach). TTL chips are robust, fairly impervious to static discharge, and still quite readily available.  Digikey has a wide assortment as does Jameco and other component retailers.

When you get a logic gate IC, you usually don't get a single gate. Depending on the exact configuration of inputs, you might get 2, 3, 4, or even 6 gates on a single chip. For example here's configuration of a 7400, a chip that contains 4 2-input NAND gates. 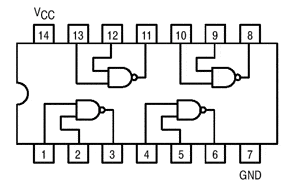 Physically it comes in a 14 pin chip. These are available in surface mount packages, but it's a lot easier to work with on a breadboard if you go oldschool with DIP (Dual Inline Package) chips.  The 7400 is packaged in a DIP-14, that looks something like (except that this is a 7404, hex NOT gate): 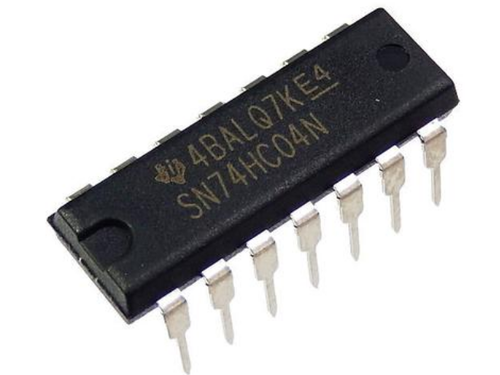 Note the dimple in one end. That corresponds to the notch in the pinout diagram. It denotes the end of the chip with pin 1. Pin numbering starts there and proceeds counter-clockwise around the chip. Some chips will have a small circular depression near pin 1 instead. In any case, there will always be a clear way of telling where pin 1 is.

The other simple, 2-input gates will be similar, but be sure to check the datasheets to confirm pinouts as sometimes they differ. For example, here's the configuration of the 7402, a quad 2-input NOR gate: 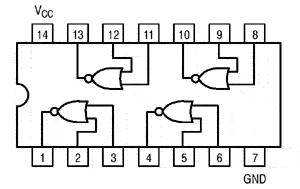 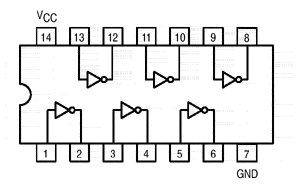 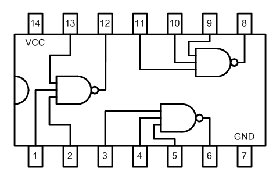