Boolean logic gets it's name from George Boole who formulated the subject in his 1847 book The Mathematical Analysis of Logic. Boole defined an algebra (not shockingly, called Boolean Algebra) for manipulating combinations of True and False values.  True and False (we'll use T and F as a shorthand)... sounds similar to 1 and 0, or on and off. It should be no surprise that boolean algebra is a foundation of digital circuit design.

A very useful tool when working with boolean logic is the truth table. For simplicity and consistancy, we'll use A, B, C, and so on for inputs and Q for output. Truth tables list all possible combinations of inputs. At this point we limit our discussions to 2 inputs, though logical operations can have any number. For each combination the corresponding result is noted. As we explore more complex logic circuits we will find that there can be multiple outputs as well.

Here are tables for AND, OR, and NOT. 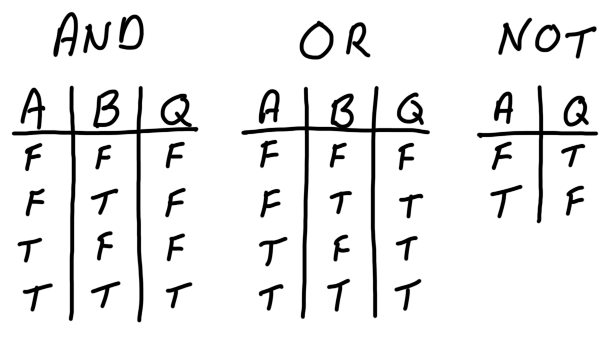 These basic operations can be combined in any number of ways to build, literally, everything else in a computer.

One of the more common combinations is NAND, this is simply NOT AND. Likewise NOR is NOT OR. 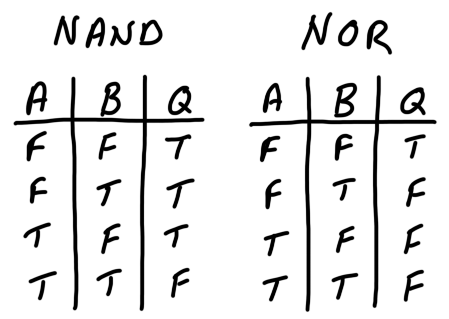 One more pair of operations that is particularly useful (as we'll see in a later guide) is exclusive-or and it's negation: exclusive-nor. 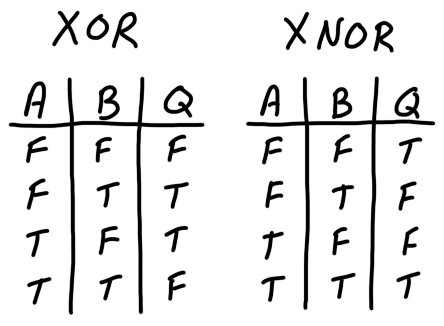 The XOR is like an OR with the exception that Q is F if all the inputs are T, and T only if some inputs are T. You could describe this as Q being T when not all inputs are the same.

Of course, XNOR is the opposite: Q is T if, and only if, all inputs are the same.

We will see these gates later when we explore adders.

Look at the truth table for NAND. What happens if the inputs are the same? NAND acts like NOT. So you can make NOT from a NAND by connecting all its inputs together.

NAND is simply NOT AND, so what is NOT NAND? It's equivalent to NOT NOT AND. The NOTs cancel out and we are left with AND. So we can make an AND from 2 NANDs, using one to negate the output of the other.

What about OR, our other basic operation? The truth tables shows what A NAND B is.  What happens if we negate A and B (denoted by placing a bar over A and B)?  We have (NOT A) NAND (NOT B).  Let's write out the truth table for that.

That's interesting; it looks just like the truth table for A OR B.

This is a known phenomenon in boolean algebra: De Morgan's law. It was originally formulated by a Augustus De Morgan, a 19th century mathematician. It defines a relationship between AND and OR. Specifically if you negate an AND or OR expression, it is equivalent to using the other operation with the inputs negated:

Knowing from above that pairs of NOTs cancel out, we are left with:

NOT can be made with a NAND, so with 3 NANDs we can make OR. Specifically:

5V 10A switching power supply
Out of Stock
Related Guides 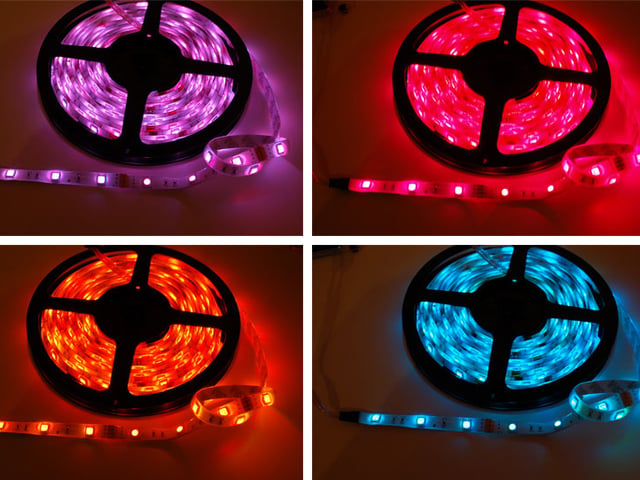 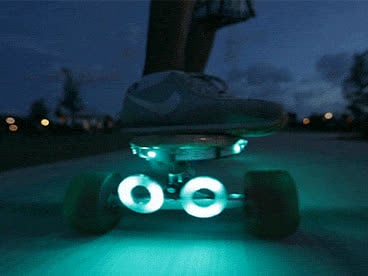