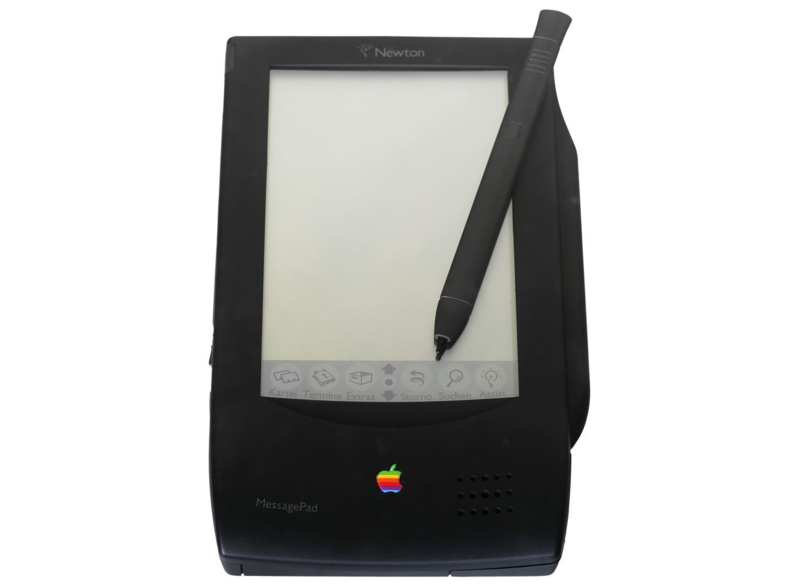 The Newton was a Personal Digital Assistant developed by Apple in the late 80s and early 90s. Though it might not look too advanced now, at the time it was fairly revolutionary. It was the first PDA to use handwriting recognition and the first Apple product to use an ARM CPU.

There were earlier PDAs (though the term was actually first used by Apple CEO John Sculley to refer to the Newton) from brands like Psion, but they were more like electronic address books than full-fledged computers. The Psion Series 3, released a year before the Newton, was much more capable but used a clamshell design with a full keyboard. The Newton's design was very different.

If you read the guide about General Magic, the Newton will seem familiar. General Magic had been working on their project in secret and were shocked to see Sculley (Apple CEO and General Magic board member) release the Newton in 1992 with a lot of their ideas incorporated.

Unfortunately the handwriting recognition, the most obvious and exciting feature, wasn't very good when it was first released. The software required training and would get better at recognizing the user's handwriting, but the process could take weeks or months. It was not received well by critics and was made fun of in Doonesbury and The Simpsons ("Lisa on Ice"). The later versions greatly improved on the original but it retains its bad reputation.

Other features of the Newton that were new at the time are common now. Data is stored in databases called soups and programs can access soups from other programs, so the calendar can see contacts in the address book or the notes app can see your calendar appointments. If you're used to modern iOS or Android that seems like a basic thing, but it was new on the Newton.

The end of the Newton product line coincided with Steve Jobs return to Apple in 1997. Sales had been slow anyway, but Jobs didn't like the device and famously hated the stylus. He killed it off but held onto the good parts for the iPhone 10 years later.

You can still find plenty of Newtons for sale, the earlier versions are more affordable but the later, more capable ones fetch a few hundred dollars. Luckily there's an emulator so let's install that and check it out!