Using patterns to specify files in the shell is all well and good - it'll save you mountains of keystrokes - but it's also a bit limited. Often, rather than the names of files on the filesystem, you need to work with text produced by other commands, or with the contents of large text files.

It's also often desirable to write patterns that can match more complicated text.

This is where tools like grep come in. Its task is to look at some text (in a file or in the standard output from another command) and print the lines that match a pattern called a regular expression.

Regular expressions (also frequently written regex or regexp) are kind of like wildcards on steroids. Instead of a handful of general-purpose magic characters, they offer a rich vocabulary for expressing what characters and how many of them a pattern should match.

Regexen are actually a deep, complicated topic, and they come in dozens of different flavors. It can take years to master their use, and they frequently confuse even very experienced programmers. Despite all that, it's easy enough to learn the basics, and the basics are enough to get quite a bit done.

As a basic example, let's find some dictionary words. grep takes a pattern and (optionally) a file to search.

The pattern here, ^magi.*$, is passed to grep inside of single quotes so that the shell won't expand characters like *. It demonstrates a bunch of the basics: 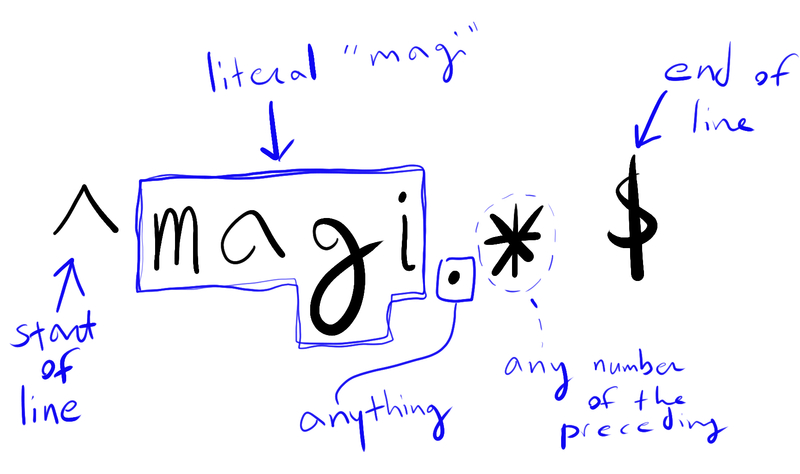 Notice how * works subtly different in a regular expression from a shell pattern. Rather than standing in for any character on its own, it imposes a quantity on the previous token.

The ^ and $ serve to anchor the pattern to the beginning and end of the line, respectively. These aren't always necessary, but it can be very useful to say that a string occurs at one end or the other.

By default, the grep command doesn't treat most characters as magical. To get the full range of its abilities, you'll want to invoke it as egrep or grep -E for Extended grep. With that in place, here are more of the basics:

In addition to -E, grep takes a bunch of other options. It's worth reading the man page, but the handful that seem to come up most often in shell pipelines are as follows:

Use Wildcards in Bash Find Files with find(1)