Skip to main content
All the Internet of Things - Episode One: Transports LoRa & SigFox
Feedback? Corrections?

So far we’ve covered plenty of short-hop radios (BT, ZigBee, ZWave), and next up are their big sisters, the medium-hop radios. These radio protocols take the same idea of a self-controlled wireless network, and give you much longer ranges. Since they have wide range, and low power, they are called LPWANs for “low power wide area networks”

LPWAN devices are not new technology, in fact, cellular is essentially a national-sized version of one. But for people who don’t want to tie into the Cellular network, and don’t need the bandwidth, LPWANs can give you excellent range for very little power and not very much money!

These networks can reach for many miles outdoors, even in high-density cities. They’re perfect in country-sides, rural and semi-urban spots, especially if you have the ability to set up a directional antenna in a high spot. What’s great about all of them is there’s no complex pairing, connection or authentication overhead (unless you want it) so you can wake up your setup and start transmitting within milliseconds.

There are three common LPWAN solutions - two commercial and one generic.

The first commercial one is LoRa (sometimes called LoRaWAN when a controlling protocol layer is added on.) LoRa uses any frequency, it’s more of a frequency management protocol - but tends to be used at 315, 433, 868 and 900 MHz ISM bands. LoRa has very little structure, it's just for sending and receiving packets of data - retransmission, link management, etc is all on you.

You can have more network management control if you add LoRaWAN on top. Like ZigBee, you’re on your own to create the network and manage routers, bridges etc. But, there are some cities that have networks set up, much like the radio relays that Amateur HAMs use.

For example, The Things Network is a social network for LoRaWAN gateways and communities

LoRa is patented, and radio chips are only manufactured via SemTech but are bundled into modules by many companies. They’re much cheaper than cellular, but a bit more expensive than BTLE or ZigBee (maybe around $4 each) and need to be controlled by a microcontroller. You can also get full LoRaWAN modules that make connecting up to a LoRaWAN network easy.

Add LoRa to your project

sigfox is a similar radio protocol, but closer to the cellular network in style. Rather than set up your own LoRa network, sigfox is an existing network set up by the self-same company. You can only use sigfox chips in a location where there is an existing network set up, but many cities have one. After you’ve registered and paid, you can join the network, send and receive data.

For example, as shown below, the SIGFOX Network portion is taken care of for you, you just do the Connected Devices part and then send/receive data via the cloud interface. 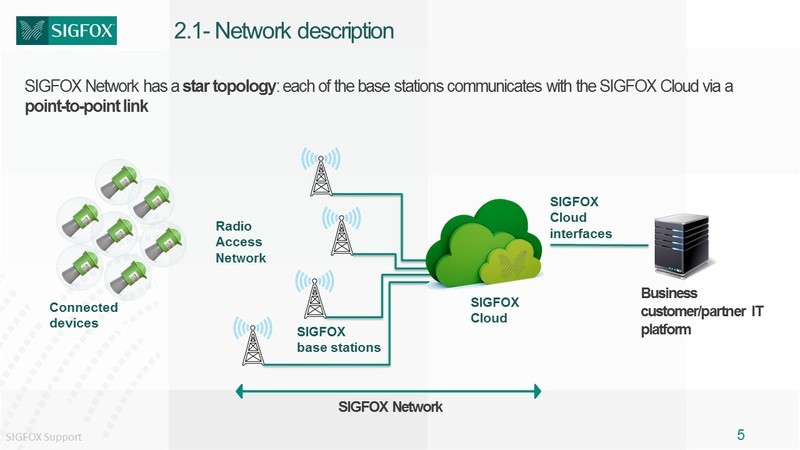 The nice thing about SigFox is you don’t have to create a network, manage gateways, etc. Since the receivers are permanently installed, they’re very fancy and powerful and let you have less expensive and less powerful chips.

The big constraint is the very tiny message bandwidth: only 140 x 12 byte message per day upload, and 4 x 8 byte per day download. Like, really limited. But maybe for some sensor data it's enough?

LoRa and Sigfox are fairly new but fill an important need where you need very low bandwidth and very high ranges, even with SigFox pricing, it's cheaper than managing a SIM card for each device. And compared to cellular the power draw is minimal. Ethernet, WiFi, Bluetooth, Cellular & Satellite were not made for millions of little low power devices whispering around the clock - but LPWANs are.

The third option is for those who want long range and maybe don’t want or need to use LoRa or SigFox at all - just roll your own!

E.g. GoTenna used Silicon Labs Si4460 Transceiver to create a 100 MHz radio network. The low frequency allowed them to get awesome range for point-to-point links. Some makers like using modules that use FSK radios such as SX1231 (or any number of others).

Managing these is done a lot like LoRa - you set up your own network and gateway. But with generic FSK-y radios you aren’t even required to pay out for the LoRa patent licensing, so they’re very inexpensive for the range you get.

Some radios even come with built-in encryption and link management assistance so you get stuff like CRC, retransmission, and node addressing. The simplicity of these radios let you stay in sleep mode for a long time until you need to wake up and transmit.