Skip to main content
All the Internet of Things - Episode One: Transports Cellular & Satellite
Feedback? Corrections?

Of the three transports we’ve discussed so far, they have one thing in common - they require a hub/router/central that is nearby. So even if they don’t have physical wires, there’s a range tether. They are best used indoors or in a controlled environment. But if you need ultimate range, cellular, & satellite is where it’s at!

As you’re well aware, cell phones can go just about anywhere - there are towers across every country, in almost any place there are people. And cellular towers can be very powerful. When coupled with a high power transceiver on your device, range can easily hit miles away.

But, as you probably know from your cell phone’s battery life, power management is a big concern. In order to reach those towers, cellular radios can draw Watts of power and you can see current spikes of 2 Amps or more.

Historically, cellular was designed for audio use only, but cellular technology moves fast. Whereas a decade ago we could only really send emails and SMS messages, it’s now commonplace to transmit full videos and large files. You may not need that kind of bandwidth but it's good to know its there.

There are a few choices for cellular.

The current generation is LTE (Long Term Evolution 4G and 5G) and is what new designs should target.

However, you’ll still see some 3G chipsets and the ancient 2G GSM standard is still kicking around.

The biggest downside to cellular apart from the high current draws is cost: Cellular modules are more expensive than WiFi or BTLE, and you have to use a module in order to get cell network-certified. And no matter what you’ll need to pay a provider, usually monthly for access and data usage.

Watch out for low cost GSM cellular modules. GSM is also called “2G” or “GPRS” provides a 200-or-so kbps datarate and it is being shut down or already has been in many countries.

In the USA, AT&T has already re-assigned their bandwidth. T-Mobile, the only other GSM provider in the US - has indicated that we only have until 2020 guaranteed. But, there are millions of old GSM devices, so you may see that deadline inch along for a bit more.

That said, if you have a project that operates in another country and that country is still on primarily GSM, the modules for GSM are smaller, lower power, and the data/rates are pretty inexpensive. One nice thing about GSM chips is they tend to be ‘quad-band’ and will work in any country so you can develop in the USA and then send it abroad, or vice versa.

There are also many 3G cellular modules available now, these tend to be larger, higher priced and higher power, but still very reasonably priced. 3G will get you a few Mbps datarate. Major carriers have not announced any plan to shut down 3G services so you should be good for at least 5-10 years. One thing to watch for is most modules are based on technology that can only be used in one region at a time - so you may have to pick different modules if you are using in the Americas, Asia or Europe.

But, if you’re starting a design now, you may want to consider LTE (sometimes called ‘4G’).

One nice thing about LTE is it has been thought through with respect to IoT so rather than sort of ‘grafting’ onto GPRS or 3G data and sharing the same technology stack as cell phones, there are different ‘categories’ to LTE.

The categories basically range from 0 to 9. 0 is slowest/lowest power and 9 is highest speed. To make it a little more confusing, what would have been CAT 0 technology is referred to as CAT M - M is for machine.

What this means is that if you want to send sensor data once a week from a remote farmhouse you can go with a low category modem (say CAT M or CAT 1) and don’t have to spend the same amount of money and power on a cellular modem that you would for streaming high speed video (say CAT 6).

Right now Cat 2+ is deployed world-wide wherever 4G is available. Cat 1 is available in North America and is rolling out world-wide. Cat M, which is best for low-bandwidth machine-to-machine is being rolled out right now, and has a few different sub-categories with varying bandwidths and ranges.

Since this technology is advancing so fast, you’ll want to check with your favorite module manufacturers and carriers to see what is available!

If you think WiFi is power hungry, you will be surprised at how much power draw you'll need to manage with a cellular module.

Here's some power traces for common events with a cellular module:

Turning on the FONA Feather 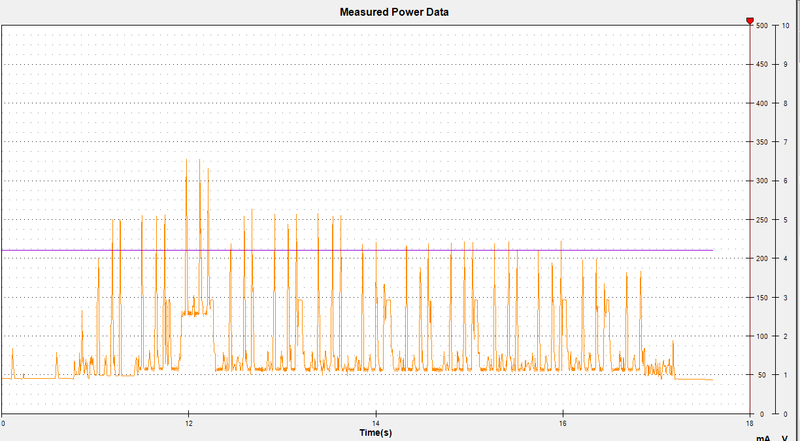 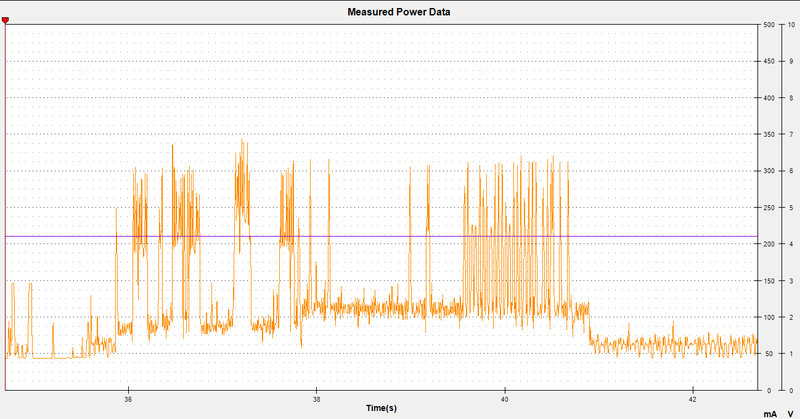 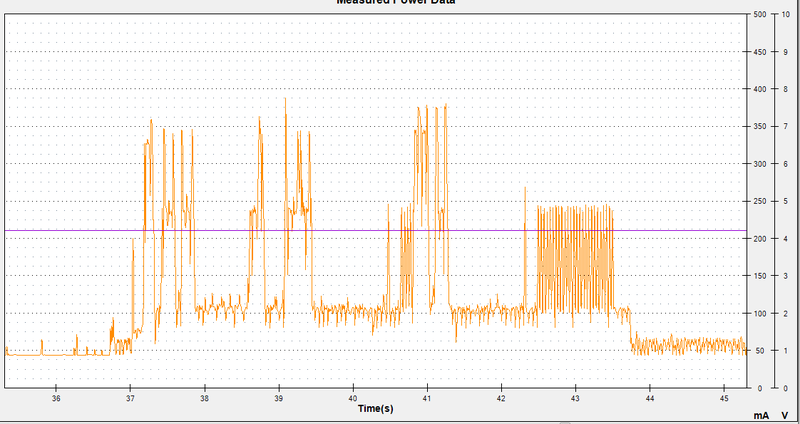 Sending an MQTT packet (about 200 bytes) 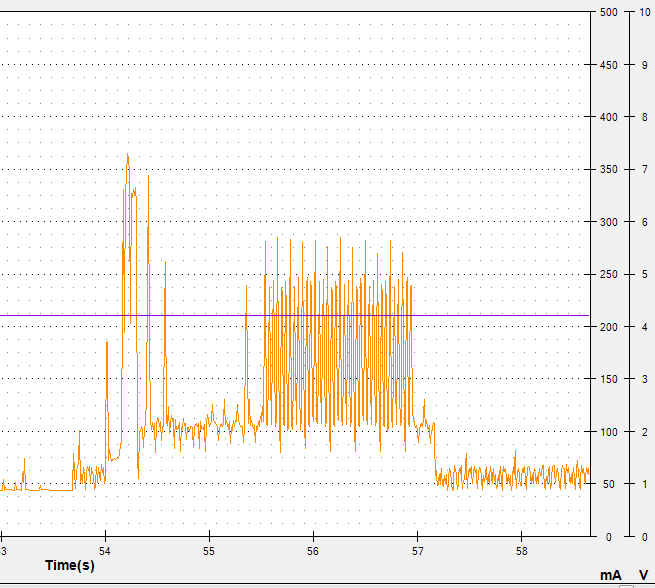 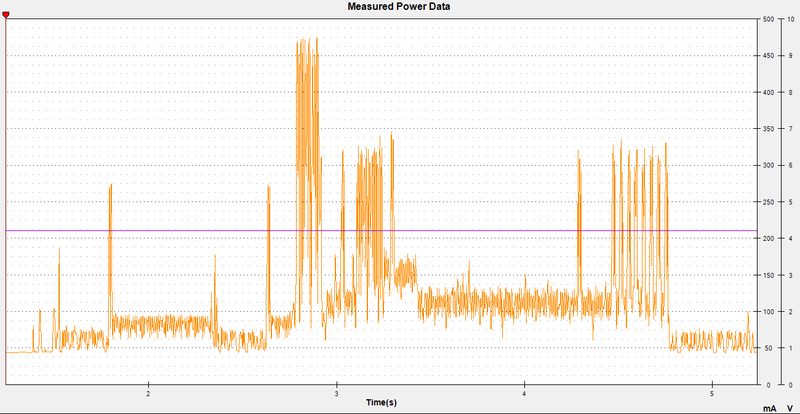 You can put the FONA into sleep mode (with the AT+CSCLK command) which will drop the current draw but keep the cellular connection open so you can still receive an SMS and/or wakeup quickly. 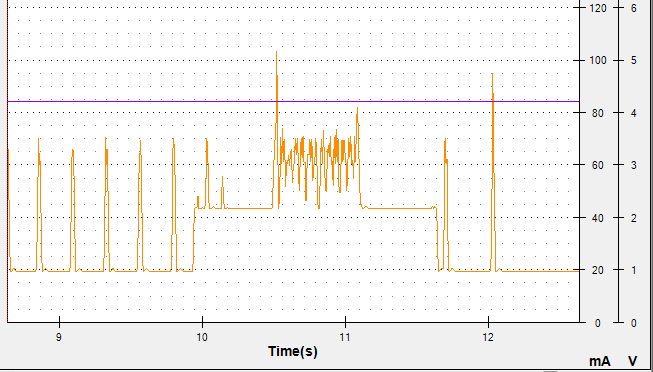 Note that the quiescent current drops from 40mA to 20mA and of that 20mA, about ~12mA is the microcontroller

This is sorta like cellular so we will cover it briefly here. When you’re not near a cell tower, like the middle of the ocean, in the wilderness, far from civilization, or where world-wide functionality is required, how can you get your thing communicating? Sensors, transportation, scientific data capture, search and rescue - these situations might stick you in the middle of nowhere. For those situations where you have very little data you have to manage and transport, satellite link-ups may work well. Note that this is a very constrained transport. For civilian uses, you will be using the Iridium constellation. You’ll pay a lot for the technology, it's huge, takes a lot of power, and you’ll also pay per month and per message.

Of course, there are a lot of downsides but if you absolutely need to communicate from anywhere in the world, without needing to set up your own bridge, relay or network - this is the only option you’ve got.