This tutorial may be outdated. It is no longer recommended for beginners, and may need modifications to code or hardware that is not indicated in the tutorial.
MICROCONTROLLERS ARDUINO COMPATIBLES / LEARN ARDUINO 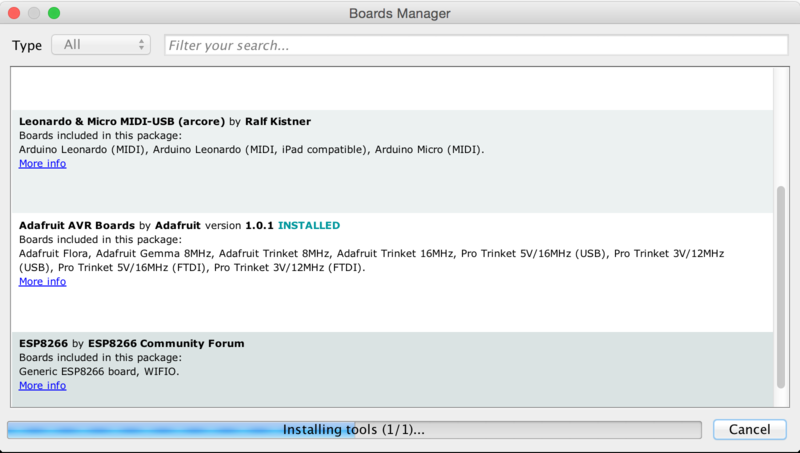 UPDATE: This guide is here for posterity, and the latest guide for adding boards to version 1.6.4+ of the Arduino IDE can be found here.

If you have downloaded v1.6.3 of the Arduino IDE, you may have noticed the addition of a feature called the Board Manager that was added along with the Library Manager. We have been working hard on updating our boards to work with the new Manager, but the IDE doesn't currently support adding of custom boards to the list. We have a temporary workaround for that issue in the form of a simple open source HTTP proxy that adds the Trinket Pro and Flora boards to the Board Manager list. We have also packaged other useful boards and added them to the proxy so they are easy for you to install.

Next we'll look at how to setup your Arduino IDE to use the proxy.

First you will need to download version 1.6.3 of the Arduino IDE. This method will only work with version 1.6.3, so please double check and make sure that is the version you are using.

If you are running any type of AntiVirus or Malware software on your computer, please make sure to whitelist apt.adafruit.com port 5050 so the traffic will not be blocked.

You will then be able to open the Boards Manager under the Tools->Board menu.

Once you have opened the Boards Manager, you will be able to install the new packages. Select the package you wish to install, and click the Install button to install it. 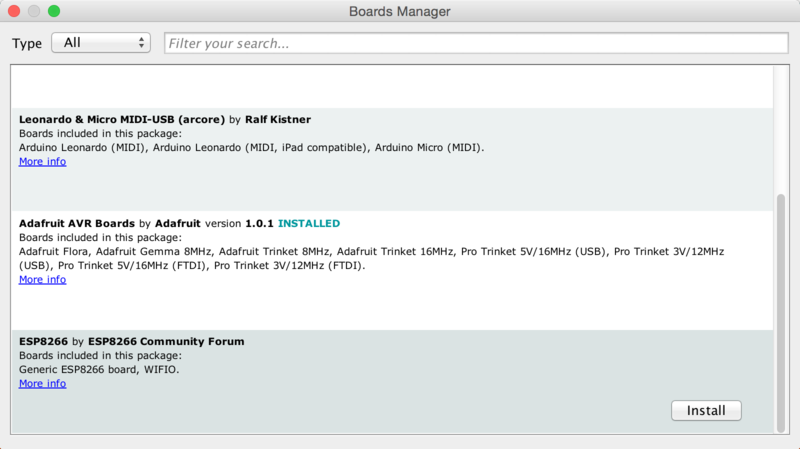 Your new boards will now show up in the Tools->Board menu after installation has completed. 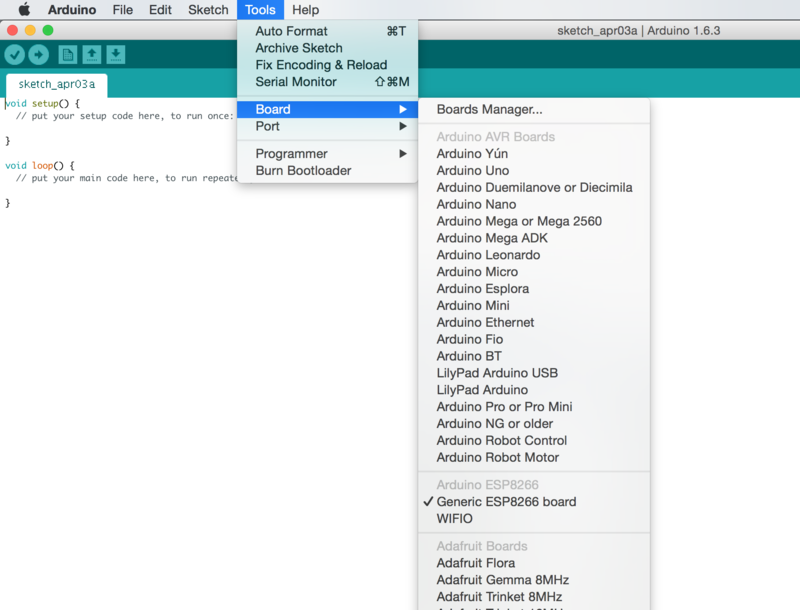 A restart of the Arduino IDE might be required to get the newly installed boards to function properly.

That's it! Please let us know in the Adafruit Forums if you have any issues!

Some of you may be wondering why how this works, or why it is needed. The Arduino Board Manager makes a request to the arduino.cc servers for a file called package_list.json every time you load the Board Manager. This works very similar to the Arduino Library Manager, but unlike the Library Manager, there is currently no support for adding third party board packages. This is where our proxy server comes in. There is no need to download the proxy server unless you wish to server your own custom board packages.

Pointing the Arduino IDE at the proxy server allows us to intercept any requests to the package_list.json file, and inject new boards into the JSON before serving it back to the IDE. This is known as a man-in-the-middle attack. Generally man-in-the-middle attacks are used for malicious purposes, so let's refer to this as "Adafruit-in-the-middle" since we are using it for friendly purposes. 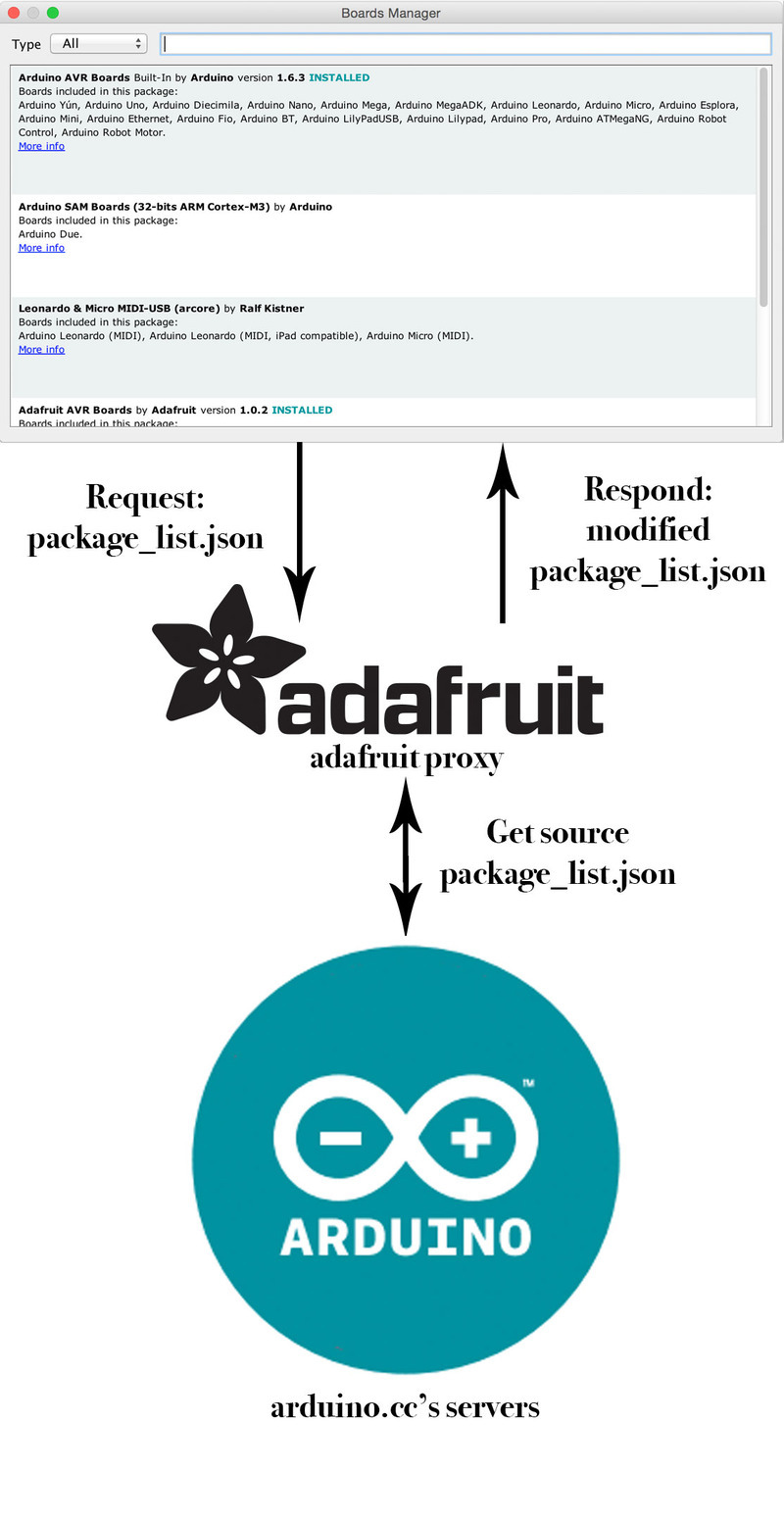 You can find our additions to the JSON file by visiting the GitHub repo and examining the files in the boards and packages directories.