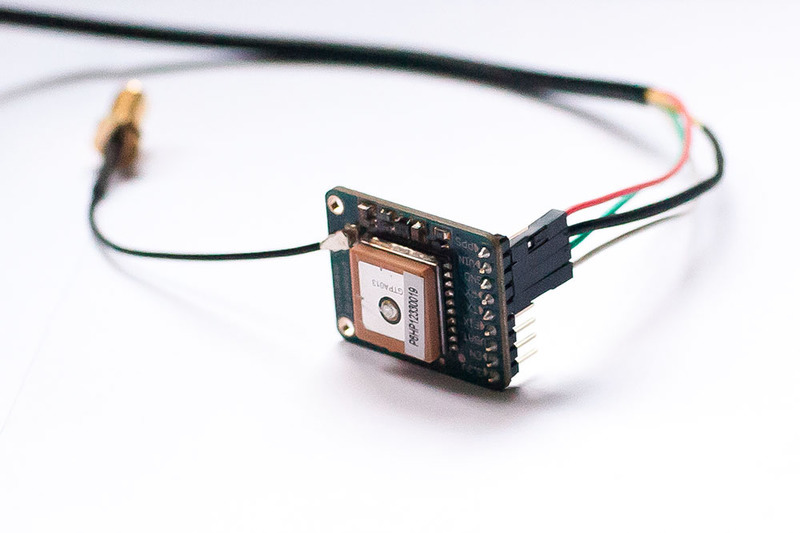 How easy is it to get your Raspberry Pi eavesdropping on satellites 20,000 km up in the sky? Wonderfully easy thanks to Linux, and affordable thanks to Adafruit's Ultimate GPS Breakout!

Please note this guide installs a system service called gpsd which you can then query for data. You may be better off just using pure python to read data from the GPS, its less complex in many cases

Don't forget to also read our Ultimate GPS tutorial which has a lot of information about this GPS module and datasheets/example code that you will find handy!

The easiest way to get started is to use an inexpensive USB to TTL adapter cable with your GPS module.

You can of course use the HW UART directly on the Pi, but as you can see in this tutorial (Freeing UART on the Pi) it's a bit more complicated, and there are no secondary consequences with the USB adapter.

This tutorial will assume that we are using the USB to TTL cable mentioned above, and that we are running on Raspbian. Raspbian already has the drivers for PL2303-based cables pre-installed, so you just need to plug it in and it should show up as /dev/ttyUSB0).

Hooking The Breakout Up

The first thing you'll need to do is to hook your Ultimate GPS Breakout up to the Pi with the adapter cable. The following diagram shows you what you need to know, essentially just connecting the cables of the same color together. 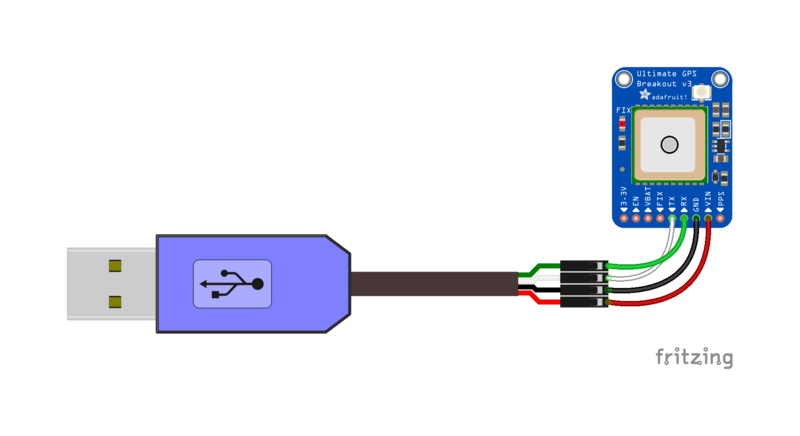 While the module on the Ultimate GPS Breakout has an exceptionally sensitive antenna and may work indoors as is, you may want to pick up an external GPS Antenna and an SMA to u.FL adapter cable if this is for indoor use. This will allow you to keep the Pi and GPS breakout indoors, but run the antenna out a window or at least near one for improved reliability ans signal integrity.

Setting up the USB Adapter

Once you plug the USB cable into the Pi, the adapter should show up as /dev/ttyUSB0 (though the '0' may be different if you have other ttyUSB adapters present).

You can see a list of all ttyUSB devices by entering the following into the console (I'm using the 'terminal' feature in Adafruit's browser-based WebIDE here for convenience sake!):
Download: file
Copy Code

If you have any problems, you can enter the following command to see the USB devices on your Pi:
Download: file
Copy Code
Which should show you the USB adapter (Prolific PL2303), as follows:

If you just want to do a quick check to see what data is coming out of the GPS, you can enter the following command, followed by Ctrl-C to quit:

The next step is installing some software on your Raspberry Pi that understands the serial data that your GPS module is providing via /dev/ttyUSB0.

Thankfully other people have already done all the hard work for you of properly parsing the raw GPS data, and we can use (amongst other options) a nice little package named 'gpsd', which essentially acts as a layer between your applications and the actual GPS hardware, gracefully handling parsing errors, and providing a common, well-defined interfaces to any GPS module.

To install gpsd, simply run the following commands from the console:
Download: file
Copy Code
... which will install the required packages (an internet connection will be required for this step!)

After disabling the gpsd systemd service above you're ready to try running gpsd manually.  Now run the following command to manually start gpsd and point it at the GPS breakout on the USB serial adapter port:

Download: file
Copy Code
... which will point the gps daemon to our GPS device on the USB to TTY adapter cable (simply substitute '/dev/ttyUSB0' for another destination if required).

After a few seconds, gpsd should open up the proper socket and if the GPS is locked we should be able to get some data from the GPS module.

To test this, we can use the following command:
Download: file
Copy Code
If you have a fix, you'll see something like the following information in the terminal window:

If you have any problems and cgps always displays 'NO FIX' under status and then aborts after a few seconds, you may need to restart the gpsd service. You can do that via the following commands:
Download: file
Copy Code

Now that your GPS is up and running, and gpsd is playing nice with it, it's time to do something with the data!

The easiest way to get started is using a bit of Python code to access gpsd.  First, install the gps module from PyPI:

Next, use nano or the text editor of your choice to save the following code in a file called gpstest.py:

Download: file
Copy Code
This should give you something similar to the following (with an update every second or so):

Looking for position data rather than just the timestamp? Essentially, all you have to do is parse the 'report' data following the example above.

To see what data is available, you can uncomment the print(report) line, and then just look at the different values and class names and pick and choose whatever you want.

For example, you could use the following code to get the current speed using the TPV class:

Download: file
Copy Code
That's it! It's pretty painless, and now it's up to you to figure out what you want to do with you latitude, longitude, date and time, speed, altitude, etc.!

Using UART instead of USB

If you wish to use HW UART instead of the USB cable, it's perfectly possible - you just need to do a bit more work to free the UART up on your Pi.

To get started, hook the GPS module up to your Pi as follows, cross-connecting the TX and RX pins (TX on one device goes to RX on the other and vice versa), and supply 5V from the Pi to the VIN pin on the GPS module:

We designed the Ultimate GPS with a built-in regulator, so even if it's powered with 5V, the signal levels are still 3.3V - safe for your Pi!

Once complete you should have no console and yes on serial interface:

Once you've rebooted, you can use the built in UART via /dev/ttyS0 or /dev/serial0.

After rebooting the Pi for the above changes to take effect, you can proceed with running gpsd

Restart gpsd and redirect it to use HW UART instead of the USB port we pointed it to earlier. Simply entering the following two commands.

And for the Raspberry Pi 3 or the Pi Zero W, run these commands to use the different serial port:

Don't forget to also read our bigger tutorial on the Ultimate GPS which has lots more details, datasheets and examples for setting the sentences, update rate, etc!

Doing something fun with GPS and tracking data? Be sure to post about it in the Adafruit forums so everyone else can get inspired by it!
This guide was first published on Jan 24, 2013. It was last updated on Jan 24, 2013.

How to disassemble an Amazon Dash button and reprogram its STM32 processor!
Tony DiCola

One GPS to rule them all and in the darkness find them!
lady ada 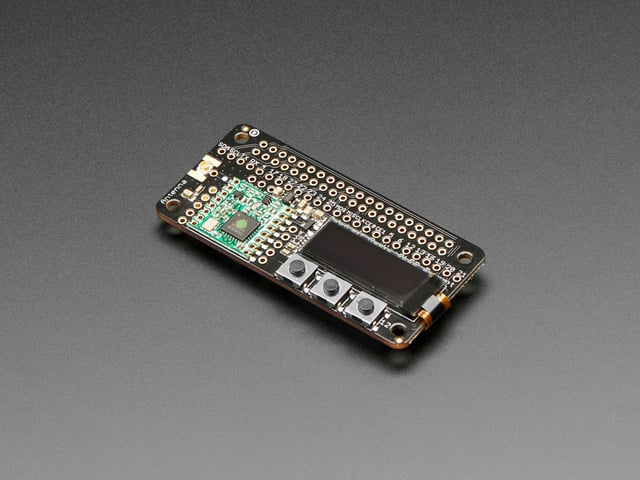 Upgrade your Raspberry Pi with a LoRa or Packet radio, so it can communicate over very long distances!
Kattni Rembor