This page is shared between the RFM69 breakout and the all-in-one Feather RFM69's. The example code and overall functionality is the same, only the pinouts used may differ! Just make sure the example code is using the pins you have wired up.

Before beginning make sure you have your Arduino or Feather working smoothly, it will make this part a lot easier. Once you have the basic functionality going - you can upload code, blink an LED, use the serial output, etc. you can then upgrade to using the radio itself.

Note that the sub-GHz radio is not designed for streaming audio or video! It's best used for small packets of data. The data rate is adjustable but its common to stick to around 19.2 Kbps (thats bits per second). Lower data rates will be more successful in their transmissions

The SX1231 can be used in a 'raw rx/tx' mode where it just modulates incoming bits from pin #2 and sends them on the radio, however there's no error correction or addressing so we wont be covering that technique.

Instead, 99% of cases are best off using packetized mode. This means you can set up a recipient for your data, error correction so you can be sure the whole data set was transmitted correctly, automatic re-transmit retries and return-receipt when the packet was delivered. Basically, you get the transparency of a data pipe without the annoyances of radio transmission unreliability

These radios have really great libraries already written, so rather than coming up with a new standard we suggest using existing libraries such as LowPowerLab's RFM69 Library and AirSpayce's Radiohead library which also suppors a vast number of other radios

These are really great Arduino Libraries, so please support both companies in thanks for their efforts!

We recommend using the Radiohead library - it is very cross-platform friendly and used a lot in the community!

To begin talking to the radio, you will need to download our small fork of the Radiohead from our github repository. You can do that by visiting the github repo and manually downloading or, easier, just click this button to download the zip

Rename the uncompressed folder RadioHead and check that the RadioHead folder contains files like RH_RF69.cpp and RH_RF69.h (and many others!)

Place the RadioHead library folder in your arduinosketchfolder/libraries/ folder.
You may need to create the libraries subfolder if it's your first library. Restart the IDE.

Lets get a basic demo going, where one radio transmits and the other receives. We'll start by setting up the transmitter

This code will send a small packet of data once a second to another RFM69 radio, without any addressing.

Load this code into your Transmitter Arduino or Feather! 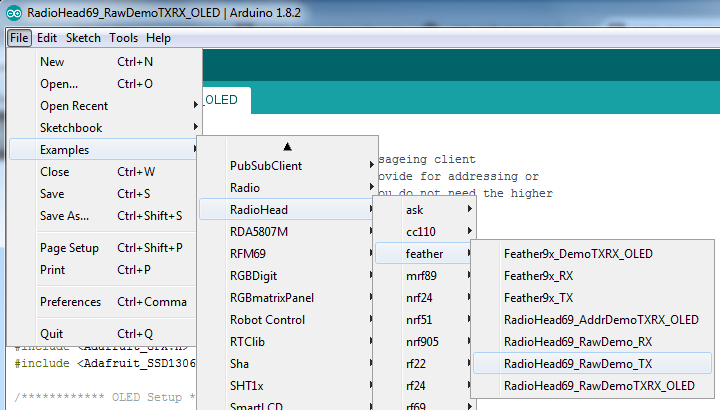 Before uploading, check for the #define FREQUENCY RF69_915MHZ line and comment that out (and uncomment the line above) to match the frequency of the hardware you're using
These examples are optimized for the Feather 32u4/M0. If you're using differnet wiring, uncomment/comment/edit the sections defining the pins depending on which chipset and wiring you are using! The pins used will vary depending on your setup!

Once uploaded you should see the following on the serial console 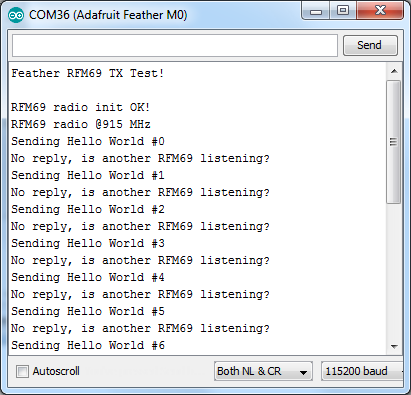 Now open up another instance of the Arduino IDE - this is so you can see the serial console output from the TX device while you set up the RX device.

This code will receive and reply with a small packet of data.

Load this code into your Receiver Arduino/Feather! 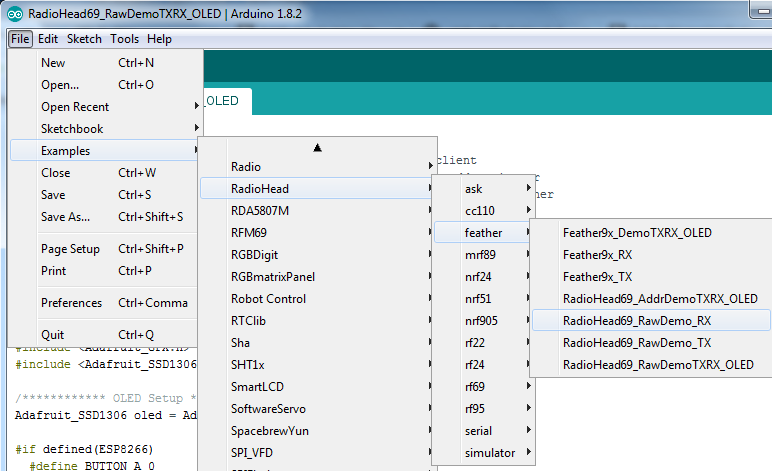 Before uploading, check for the #define FREQUENCY RF69_915MHZ line and comment that out (and uncomment the line above) to match the frequency of the hardware you're using
These examples are optimized for the Feather 32u4/M0. If you're using differnet wiring, uncomment/comment/edit the sections defining the pins depending on which chipset and wiring you are using! The pins used will vary depending on your setup! 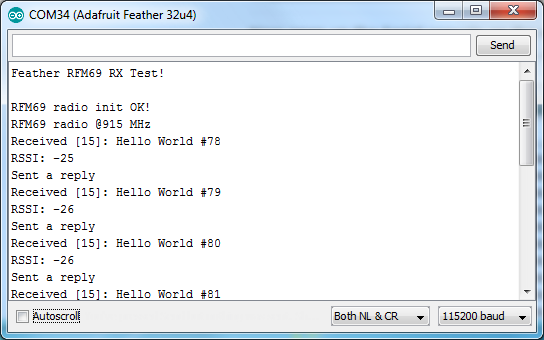 And, on the transmitter side, it is now printing Got Reply after each transmisssion because it got a reply from the receiver 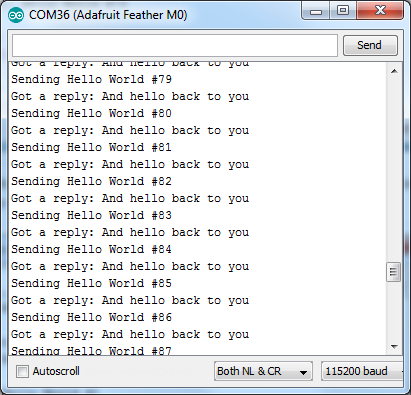 That's pretty much the basics of it! Lets take a look at the examples so you know how to adapt to your own radio network

Each radio has a frequency that is configurable in software. You can actually tune outside the recommended frequency, but the range won't be good. 900 MHz can be tuned from about 850-950MHz with good performance. 433 MHz radios can be tuned from 400-460 MHz or so.

At the top of the sketch you can also set the pinout. The radios will use hardware SPI, but you can select any pins for RFM69_CS (an output), RFM_IRQ (an input) and RFM_RST (an output). RFM_RST is manually used to reset the radio at the beginning of the sketch. RFM_IRQ must be an interrupt-capable pin. Check your board to determine which pins you can use!

Also, an LED is defined.

For example, here is the Feather 32u4 pinout

If you're using a Feather M0, the pinout is slightly different:

If you're using an Arduino UNO or compatible, we recommend:

If you're using a FeatherWing or different setup, you'll have to set up the #define statements to match your wiring

You can then instantiate the radio object with our custom pin numbers. Note that the IRQ is defined by the IRQ pin not number (sometimes they differ).

If you are using a board with 'native USB' make sure the while (!Serial) line is commented out if you are not tethering to a computer, as it will cause the microcontroller to halt until a USB connection is made!

Once initialized, you can set up the frequency, transmission power, radio type and encryption key.

For the frequency, we set it already at the top of the sketch

For transmission power you can select from 14 to 20 dBi. Lower numbers use less power, but have less range. The second argument to the function is whether it is an HCW type radio, with extra amplifier. This should always be set to true!

Finally, if you are encrypting data transmission, set up the encryption key

If you are using the transmitter, this code will wait 1 second, then transmit a packet with "Hello World #" and an incrementing packet number, then check for a reply

Its pretty simple, the delay does the waiting, you can replace that with low power sleep code. Then it generates the packet and appends a number that increases every tx. Then it simply calls send() waitPacketSent() to wait until is is done transmitting.

It will then wait up to 500 milliseconds for a reply from the receiver with waitAvailableTimeout(500). If there is a reply, it will print it out. If not, it will complain nothing was received. Either way the transmitter will continue the loop and sleep for a second until the next TX.

The Receiver has the same exact setup code, but the loop is different

Instead of transmitting, it is constantly checking if there's any data packets that have been received. available() will return true if a packet with the proper encryption has been received. If so, the receiver prints it out.

It also prints out the RSSI which is the receiver signal strength indicator. This number will range from about -15 to -80. The larger the number (-15 being the highest you'll likely see) the stronger the signal.

If the data contains the text "Hello World" it will also reply to the packet.

Once done it will continue waiting for a new packet

OK once you have that going you can try this example, RadioHead69_RawDemoTXRX_OLED. We're using the Feather with an OLED wing but in theory you can run the code without the OLED and connect three buttons to GPIO #9, 6, and 5 on the Feathers. Upload the same code to each Feather. When you press buttons on one Feather they will be printed out on the other one, and vice versa. Very handy for testing bi-directional communication! 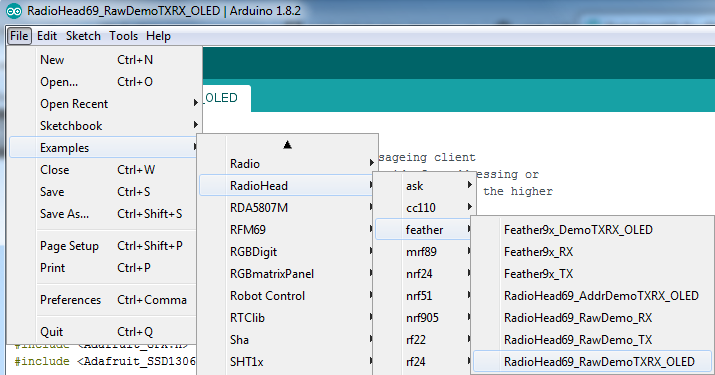 This demo code shows how you can listen for packets and also check for button presses (or sensor data or whatever you like) and send them back and forth between the two radios!

OK so the basic demo is well and good but you have to do a lot of management of the connection to make sure packets were received. Instead of manually sending acknowledgements, you can have the RFM69 and library do it for you! Thus the Reliable Datagram part of the RadioHead library.

Don't forget to check the frequency set in the example, and that the pinouts match your wiring!!!

Each client can have its own address set, as well as the server address. See this code at the beginning:

For each client, have a unique MY_ADDRESS. Then pick one server that will be address #1

Once you upload the code to a client, you'll see the following in the serial console: 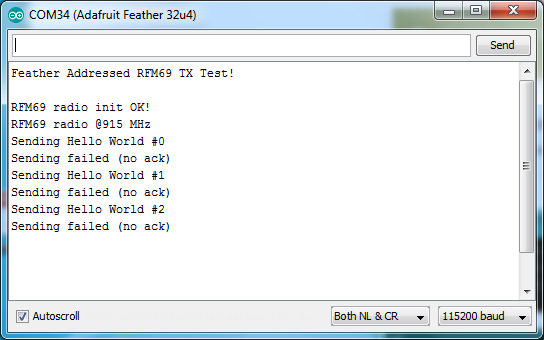 Because the data is being sent to address #1, but #1 is not acknowledging that data.

If you have the server running, with no clients, it will sit quietly: 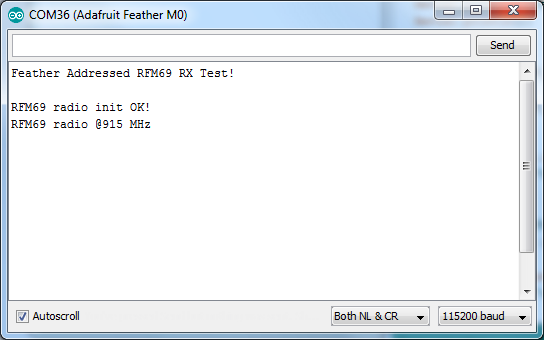 Turn on the client and you'll see acknowledged packets! 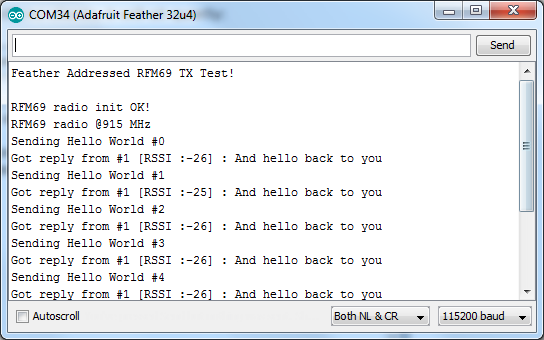 And the server is also pretty happy 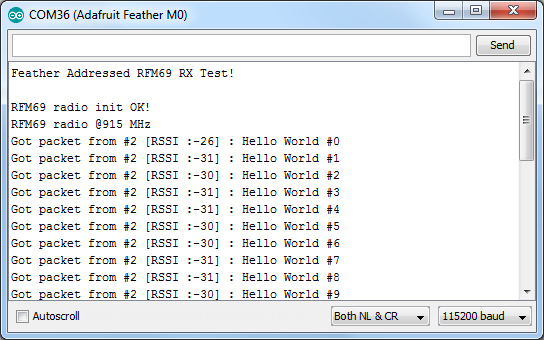 The secret sauce is the addition of this new object:

Which as you can see, is the manager for the RFM69. In setup() you'll need to init it, although you still configure the underlying rfm69 like before:

And when transmitting, use sendToWait which will wait for an ack from the recepient (at DEST_ADDRESS)

That function will wait forever. If you'd like to timeout while waiting for a packet, use recvfromAckTimeout which will wait an indicated # of milliseconds