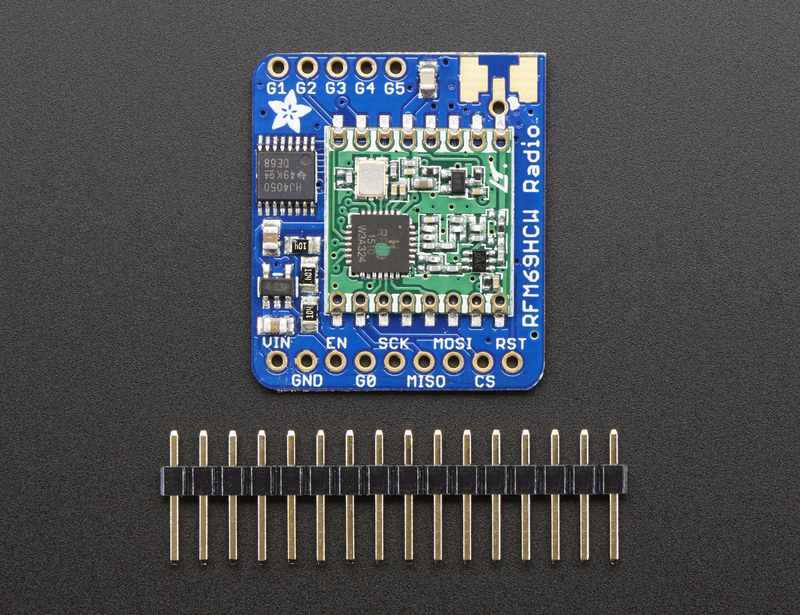 These radio breakouts do not have a built-in antenna. Instead, you have three options for attaching an antenna. For most low cost radio nodes, a wire works great. If you need to put the radio into an enclosure, soldering in uFL and using a uFL to SMA adapter will let you attach an external antenna. You can also solder an SMA edge-mount connector directly

If you want an external antenna that is a few inches away from the radio, you need to do a tiny bit more work but its not too difficult.

You'll need to get an SMT uFL connector, these are fairly standard

PRODUCT ID: 1661
uFL connectors are very small surface-mount parts used when an external RF antena is desired but a big bulky SMA connector takes up too much space. We use this part on our GPS and WiFi...
$0.75
IN STOCK
Add to Cart

You'll also need a uFL to SMA adapter (or whatever adapter you need for the antenna you'll be using, SMA is the most common

Of course, you will also need an antenna of some sort, that matches your radio frequency

uFL connectors are rated for 30 connection cycles, but be careful when connecting/disconnecting to not rip the pads off the PCB. Once a uFL/SMA adapter is connected, use strain relief! Generate ALL the frequencies!
lady ada

Using LoraWAN and The Things Network with CircuitPython