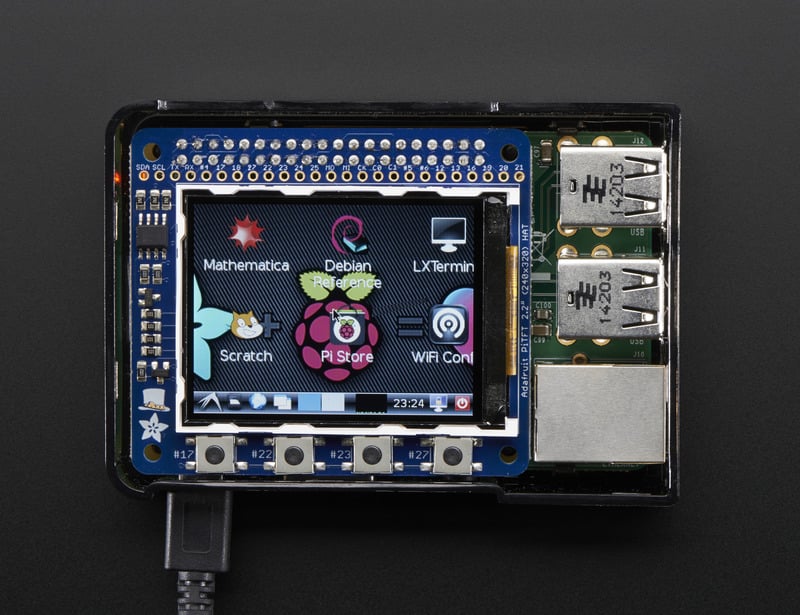 The PiTFT requires some device tree support and a couple other things to make it a nice stand-alone display. If you just want to get going, check out the following for easy-install instructions!

The same installer is used for all PiTFTs, you will pick and configure the setup during installation!

Install Raspbian on an SD Card

You'll need to start with Raspbian or Raspbian Lite.

Raspbian does often 'break' stuff when new versions come out so to be safe, if you are having problems try this version!

This script will do all the work for you, and install both device tree overlay support as well as configure rotation and any HDMI mirroring. PiTFT no longer needs any custom kernels or modules, so you can continue to update/upgrade your Pi and it will work with the most recent releases.

Here's the commands to run. Make sure your Pi has network access, it needs to download the software! 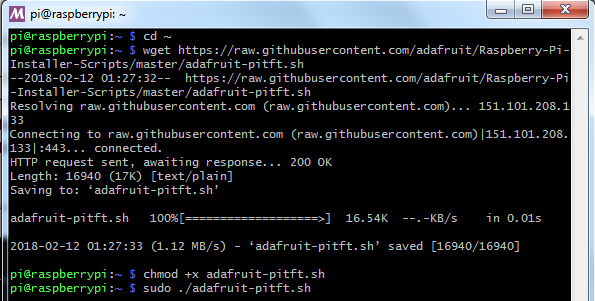 Once you run it you will be presented with menus for configuration.

Next you will be asked for the rotation you want, don't worry if you're not 100% sure which you want, you can always change this later by re-running the script

It will take a few minutes to install the software and download all the things... 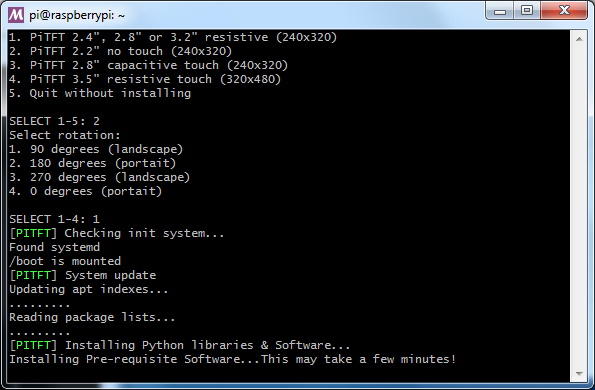 Configuring what shows where

You have a few different ways to set up the PiTFT, we ask 2 questions to figure out what you want

This is the simplest to set-up type of use. Its great if you have a simple text based or pygame/SDL based interface. If you want the PiTFT to act as a text console you can expect:

Then simply reboot. Once rebooted you will not see anything on HDMI, but the console will appear on the PiTFT. That's it!

This option is the easiest to understand: whatever appears on the HDMI display will be 'mirrored' to the PiTFT. Note that HDMI is much higher resolution so it's not like it turns the PiTFT into a 1080p display. This is great for when you want to run OpenGL-optimized software, PIXEL desktop software, or really anything. The down-side is its a little slower than drawing directly to the framebuffer. You may not notice it but it's worth us mentioning!

If you want that say Yes to the question Would you like the HDMI display to mirror to the PiTFT display?

For advanced users who are comfortable using framebuffer devices, it is possible to have the PiTFT and HDMI graphics be both active and display different data.

If you want that, say No to both of the configuration questions!

You can always change your mind after setting up one of the configurations, depending on your needs! Just re-run the script

Historically, we provided full 'images' of Raspbian. This worked OK until Raspbian started doing releases every few months. These are no longer supported, and won't even boot on Pi 3B+, so we recommend the script above.

There's the larger 'classic Jessie' image that will boot into X by default, and requires a 8G image, it has a lot more software installed. There's also the smaller 'Jessie Lite' that will boot into the command line, and can be burned onto a 2G card! Click below to download and install into a new SD card. Unzip and follow the classic SD card burning tutorials

48
Beginner
How else can you see cats doing the wobble on your desk?
Timothy Reese