Autodesk’s EAGLE — the PCB design software favored around Adafruit — has a problem: the circuit boards it produces, while perfectly functional, are ugly, with vintage plotter-like text and no font support.

One can’t really fault the software for this…it’s more an artifact of its age. When EAGLE was hatched in 1988, circuit boards went inside products, they were rarely products themselves…and if they were, appearances were of minimal concern.

But as the electronics hobby realm grew over time, the aesthetics of these parts became a distinguishing feature. While not the first, the popularity of the Arduino UNO (2010) really put this idea in the public eye, with its on-brand color and typography.

The thing about custom silkscreens is that the process is laborious, and can take days to get everything right. We’ll do that for a popular item like Circuit Playground. The custom silk is easier to read and just feels “premium.”

But to do that with every esoteric sensor breakout board, there just aren’t enough hours in the day. It would be nice, but isn’t practical.

What if there was a middle ground? Just a small push that elevates the weakest part of EAGLE’s output?

Pinguin is a Python script that substitutes TrueType fonts for EAGLE’s ugly plotter-stroke text. EAGLE currently can’t do this on its own…in fact, if you try even using the built-in “proportional” font (intended only for schematics) on a PCB, those labels are converted to the ugly font on output.

Not a typo, the name’s a portmanteau of pin (since it’s mostly I/O pins that get labeled) and penguin (keeping with the avian motif of EAGLE and other silkscreen-improving projects like SparkFun’s Buzzard).

Pinguin has limitations, as we’ll explain, and probably bugs…it’s far from a perfect solution…but it’s quick and often good enough to dress up boards for better readability.

Yes, you can now make PCBs where the silkscreen labeling is in Papyrus! 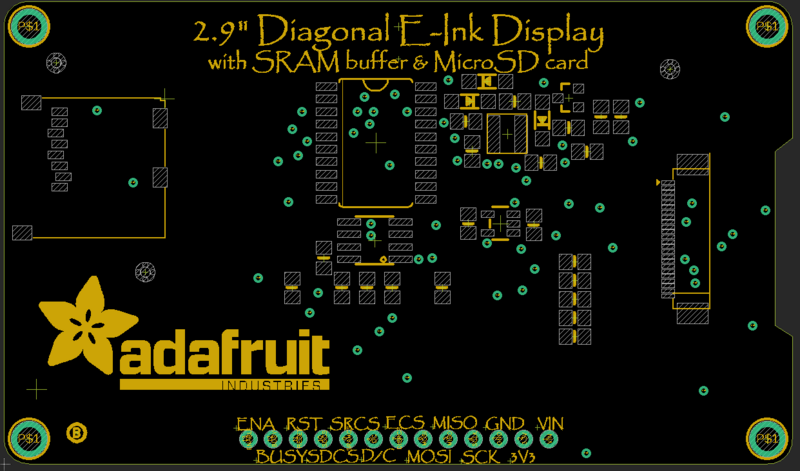