This guide is part of a series of guides that cover the basics of using Adafruit IO. It will show you how to wirelessly control a servo from Adafruit IO.

If you haven't worked your way through the Adafruit IO feed and dashboard basics guides, you should do that before continuing with this guide so you have a basic understanding of Adafruit IO.

You should go through the setup guides associated with your selected set of hardware, and make sure you have internet connectivity with the device before continuing. The following links will take you to the guides for your selected platform.

If you have went through all of the prerequisites for your selected hardware, you are now ready to move on to the Adafruit IO setup steps that are common between all of the hardware choices for this project. Let's get started!

The first thing you will need to do is to login to Adafruit IO and visit the Settings page.

Click the VIEW AIO KEY button to retrieve your key. 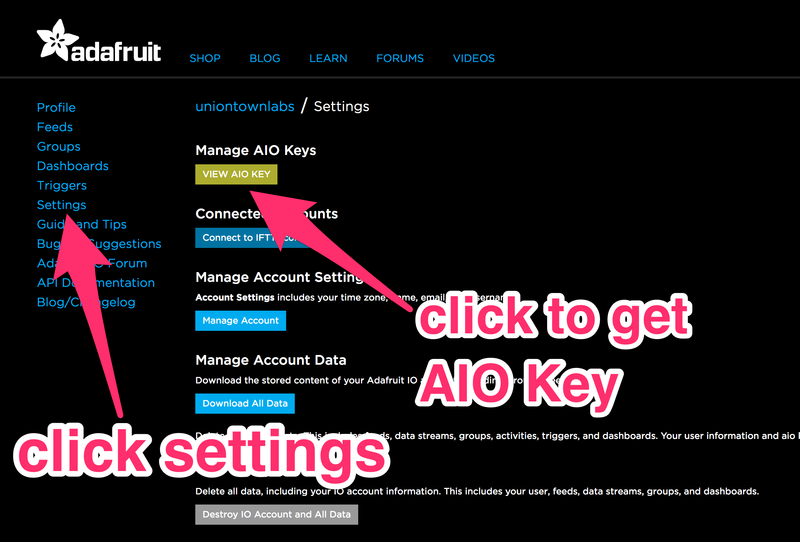 A window will pop up with your Adafruit IO. Keep a copy of this in a safe place. We'll need it later.

Next, you will need to create a feed called Servo. If you need help getting started with creating feeds on Adafruit IO, check out the Adafruit IO Feed Basics guide. 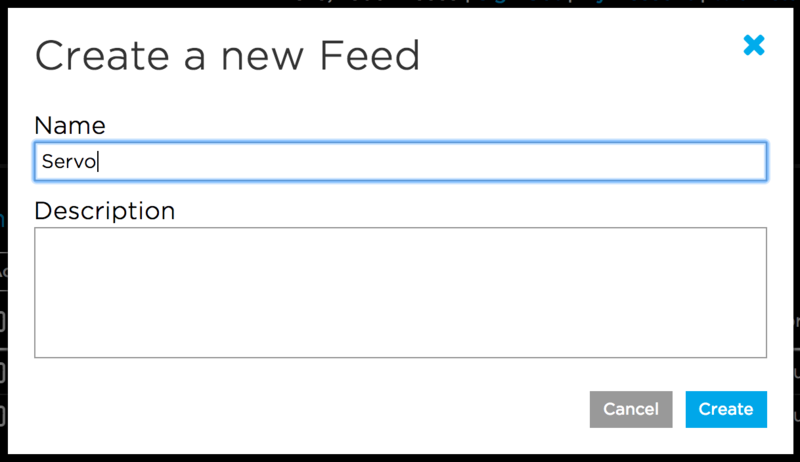 Next, add a new Slider Block to a new or existing dashboard. Name the block whatever you would like, and set min value to 0 and max value to 180. Make sure you have selected the Servo feed as the data source for the slider.

If you need help getting started with Dashboards on Adafruit IO, check out the Adafruit IO Dashboard Basics guide. 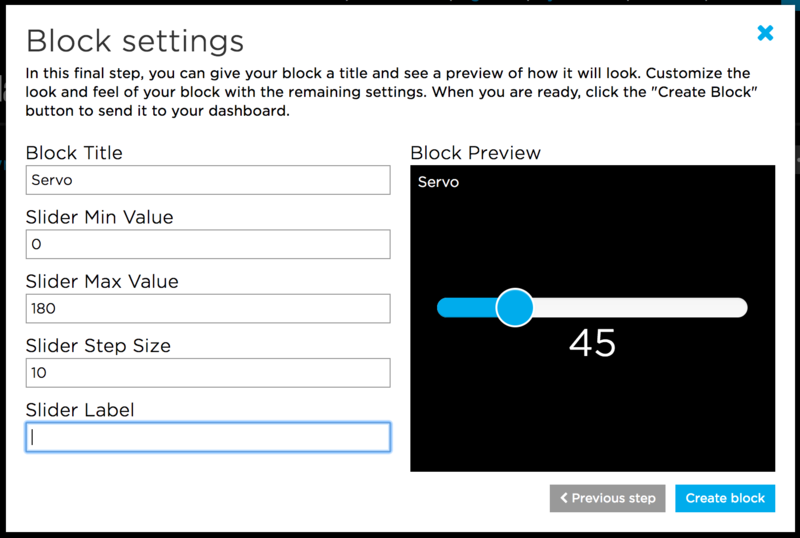 When you are finished editing the form, click Create Block to add the new block to the dashboard.

Next, we will look at wiring the circuit.

You will need the following parts for this tutorial:

You will need to connect the following pins to the servo using the three jumper wires:

You should go through the setup guides associated with your selected set of hardware, and make sure you have internet connectivity with the device before continuing. The following links will take you to the guides for your selected platform.

You will need to make sure you have at least version 2.4.3 of the Adafruit IO Arduino library installed before continuing.

For this example, you will need to open the adafruitio_16_servo example in the Adafruit IO Arduino library. 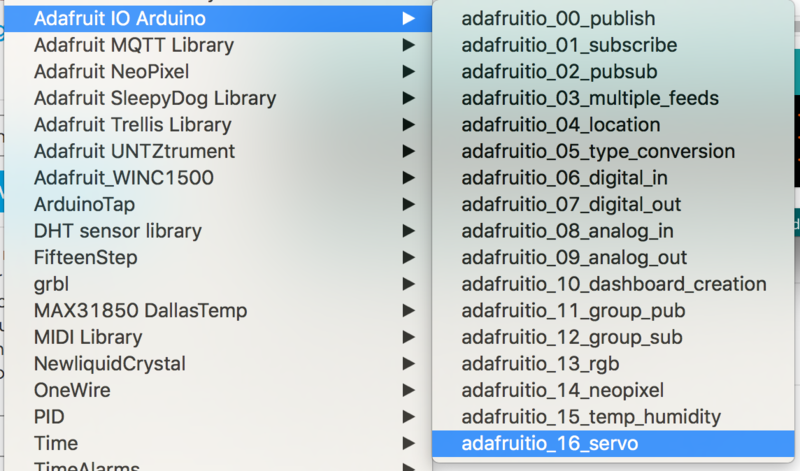 Next, we will look at the network configuration options in the sketch.

WiFi is enabled by default in config.h so if you are using one of the supported WiFi boards, you will only need to modify the WIFI_SSID and WIFI_PASS options in the config.h tab.

If you wish to use the FONA 32u4 Feather to connect to Adafruit IO, you will need to first comment out the WiFi support in config.h

Next, remove the comments from both of the FONA config lines in the FONA section of config.h to enable FONA support.

If you wish to use the Ethernet Wing to connect to Adafruit IO, you will need to first comment out the WiFi support in config.h

Next, remove the comments from both of the Ethernet config lines in the Ethernet section of config.h to enable Ethernet Wing support.

Next, we will look at how the example sketch works.

The adafruitio_16_servo example uses pin 2 by default, and that can be modified by changing the SERVO_PIN define at the top of the sketch.

In the setup function, we attach a function called handleMessage to the servo_feed, which will be called whenever your device receives messages for that feed. We also tell the servo class which pin we are using with the servo.attach() method.

The code will wait until you have a valid connection to Adafruit IO before continuing with the sketch. If you have any issues connecting, check config.h for any typos in your username or key.

Next, we have the main loop() function. The first line of the loop function calls io.run(); this line will need to be present at the top of your loop in every sketch. It helps keep your device connected to Adafruit IO, and processes any incoming data.

The final chunk of code is the handleMessage function. This is the function that is called whenever servo_feed gets a message.

We use the data->toInt() function to convert the incoming data to an int, and set the angle of the servo to that value using servo->write(). We also check to make sure that the incoming angle value is not less than 0, or greater than 180.

If you would like your servo to switch directions, you can subtract the angle from 180, and write the result to the servo.

Upload the sketch to your board, and open the Arduino Serial Monitor. Your board should now connect to Adafruit IO.

Change the slider value on your Adafruit IO dashboard, and you should see the servo change position depending on the value you send.

You'll need a few PWM outputs. This guide requires only one for the servo.

Adafruit 16-Channel 12-bit PWM/Servo Driver - I2C interface
You want to make a cool robot, maybe a hexapod walker, or maybe just a piece of art with a lot of moving parts. Or maybe you want to drive a lot of LEDs with precise PWM output. Then...
$14.95
In Stock
Add to Cart

We are powering the servo from an external 5V 2A switching power supply connected to the terminal block on the breakout board via a DC adapter.

Why wouldn't we use the +5V supply on the Raspberry Pi instead?

Switching directions on the servo can cause a lot of noise on the supply, and the servo(s) will cause the voltage to fluctuate significantly, which is a bad situation for the Pi. It's highly recommended to use an external 5V supply with servo motors to avoid problems caused by voltage drops on the Pi's 5V line. 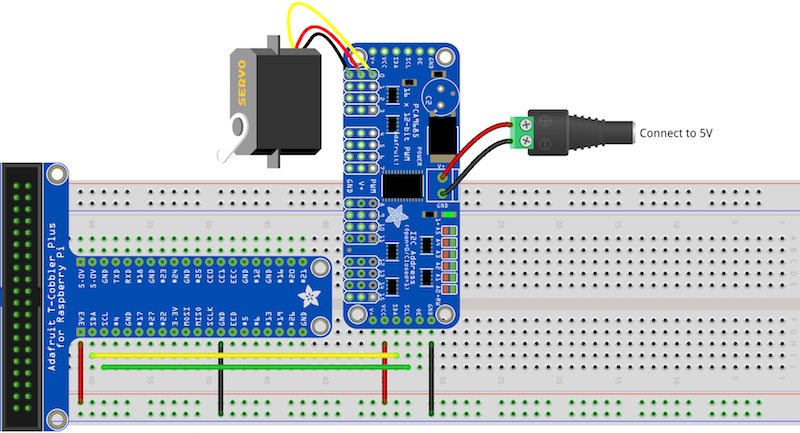 Make the following connections between the Raspberry Pi and the PCA9685:

Make the following connections between the servo and the PCA9685's Channel 0:

Controlling the PCA9865's channels directly is not an easy task. You'll need to manually set the duty cycle of each channel. Luckily, "there's a CircuitPython library for that".

CircuitPython-Motor is a helper library for easily controlling motors, servos, and PWM-based outputs.

Run the following command to install the CircuitPython-Motor library:

The imports for this guide are similar to the other guides in this series involving analog PWM output (Color, Analog Output), except this time it uses an extra library: adafruit-circuitpython-motor

By default, the servo channel is on channel 0 of the PCA9685. If you'd like to change this, you can do so by modifying the SERVO_CHANNEL variable at the top of the code:

Before we run the script, we'll need to change ADAFRUIT_IO_USERNAME and ADAFRUIT_IO_KEY to the username and key for your Adafruit IO account.

Then, we instantiate a servo object called my_servo:

Unlike the Arduino example code, we don't need to handle the servo going past it's maximum or minimum angle, the adafruit-circuitpython-motor library handles that for us.

Change the slider value on your Adafruit IO dashboard, and you should see the values output from your terminal:

You should also observe the servo change position depending on what value you send:

Encountering an issue with your Adafruit IO Arduino Project?

If you're having an issue compiling, connecting, or troubleshooting your project, check this page first.

Don't see your issue?  Post up on the Adafruit IO Forum with your issue.

I encounter the following error when compiling my sketch:

To resolve this error, from the Arduino IDE, navigate to the Manage Libraries... option in the Sketch -> Include Library menu.

To resolve this error, from the Arduino IDE, navigate to the Manage Libraries... option in the Sketch -> Include Library menu.

My Serial Monitor prints "..." endlessly after the "Connecting to Adafruit IO" message

Your board is not connecting to Adafruit IO, but why? Let's find out:

Next, we're going to modify the while loop which waits for an IO connection in your sketch. Change the line in the status check loop from Serial.println(.);to Serial.println(io.statusText());

Verify and re-upload the sketch. If you're receiving a Network disconnected error message, the board is not able to talk to the internet. Re-check your hardware, connections, and router settings.

If it's still not showing Adafruit IO connected, check the IO status on the Adafruit Status page to make sure the service is online.

My data isn't displaying, is Adafruit IO's {service/MQTT/API} down?

Possibly - you can check IO status on the Adafruit Status page.

Is my data being sent properly? Am I sending too much data? 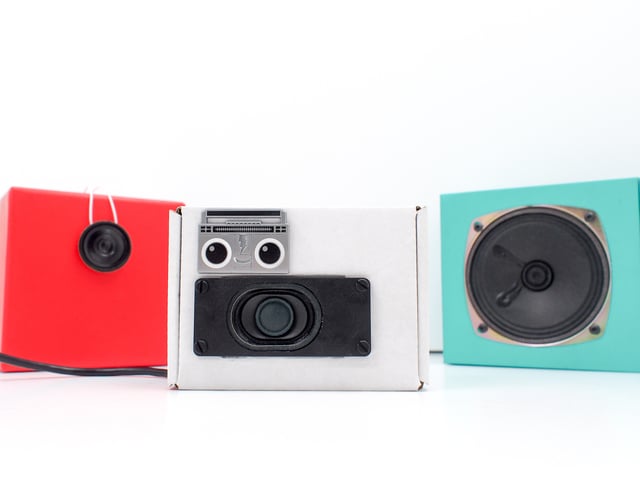 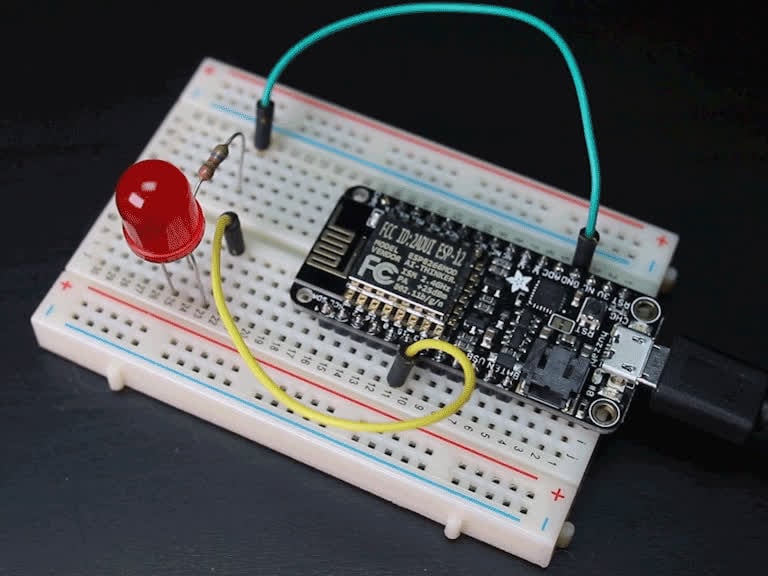