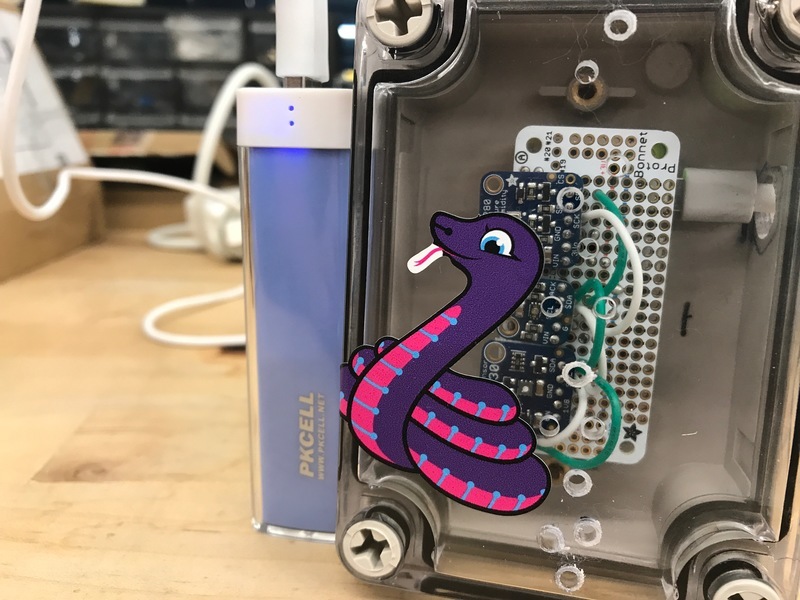 We're going make an environmental monitor using a Raspberry Pi Zero W and a Perma Proto Bonnet. We'll wire it up, build an enclosure for it, install dependencies, and program it with Python & CircuitPython

The Pi Zero W has built-in WiFi - which is great for connecting our environmental monitor to Adafruit IO. It's also smaller than a regular Raspberry Pi 3, making it the perfect size to bring with you (monitor the air in the subway station) or stick it in a small corner of your room.

We're going to be building our own pHAT for monitoring environmental data by using a Perma Proto Bonnet. 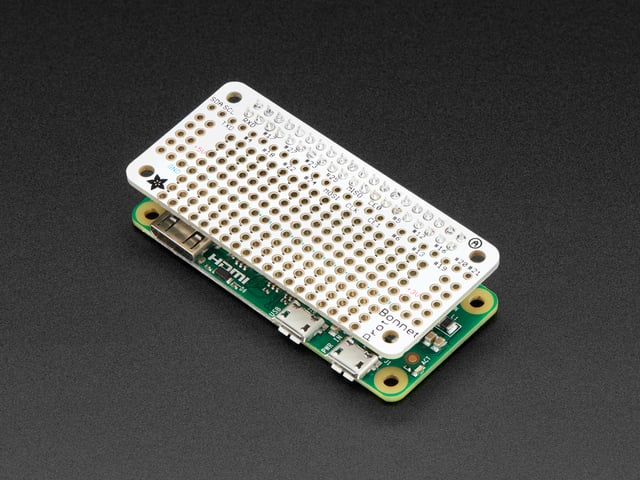 PRODUCT ID: 3203
Design your own Bonnet or pHAT, attach custom circuitry and otherwise dress your Pi Zero with this jaunty prototyping Bonnet kit!To add to the
$4.50
IN STOCK
Add to Cart

We will be connecting multiple I2C devices to a single I2C controller using only two wires - SCL and SDA. 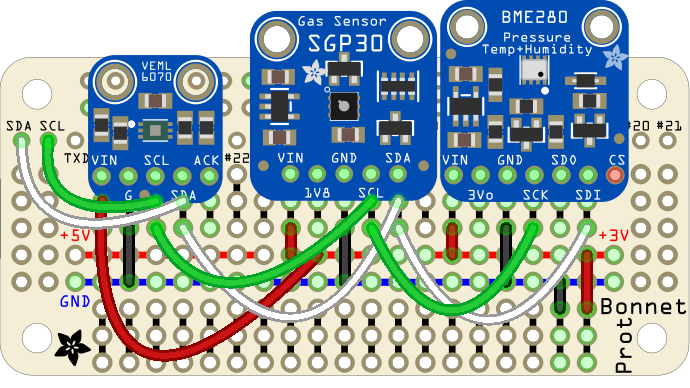 Note: The SDA and SCL lines are located at the top- of the Proto-Bonnet and do not run down the side.

Make the following connections between the Raspberry Pi and the VEML6070:

Make the following connections between the VEML6070 and the SGP30:

Make the following connections between the SGP30 and the BME280:

The small plastic project enclosure is the perfect size for a Pi Zero W and Environmental Logger Bonnett.

PRODUCT ID: 903
Store your project safe and sound in this nice weatherproof box with a clear top. We picked up this box because we like the machinable ABS plastic body and tough clear polycarbonate...
OUT OF STOCK
Out of Stock

We're going to test-fit the Pi in the project enclosure. Use a non-permanent marker to outline the positions of the Pi on the bottom of the case. 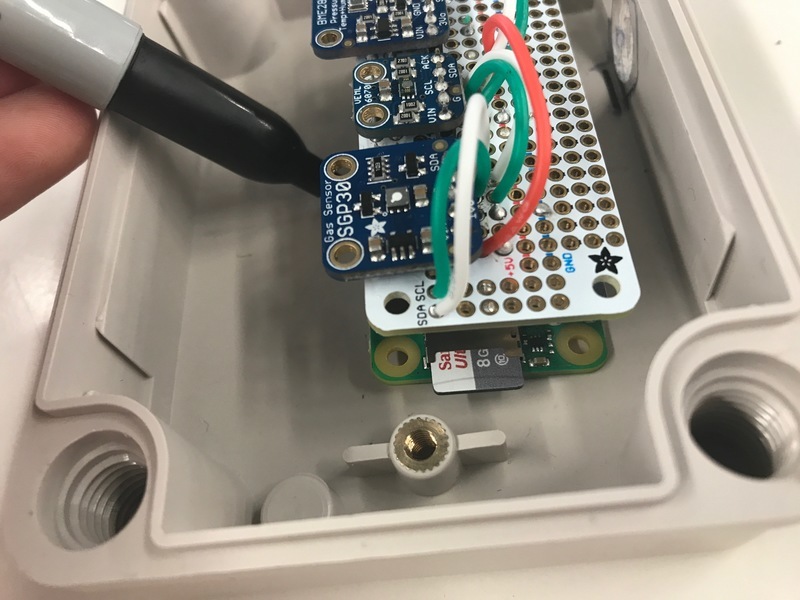 Put the lid on the box and screw it down to ensure everything fits correctly. Use a ruler and a marker to mark locations for holes on the plastic lid of your project box. Be sure to mark the locations closer to the sensors. 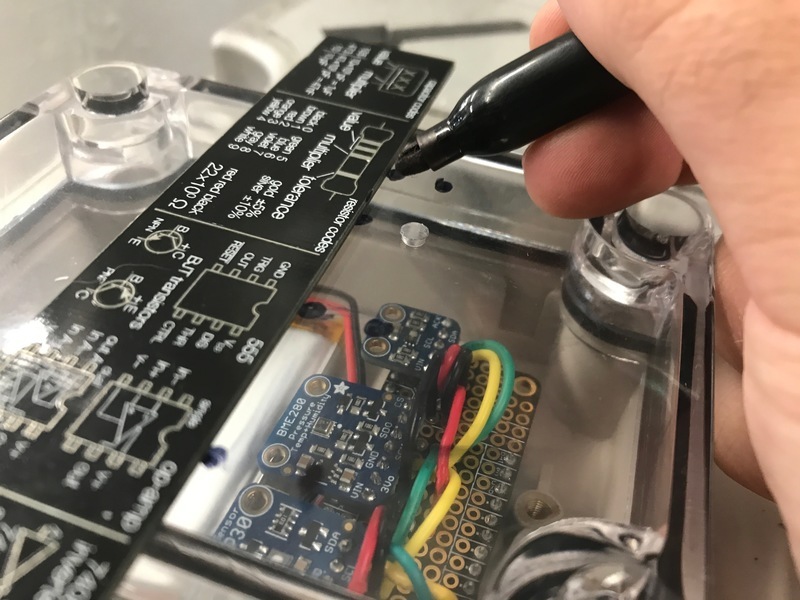 Let's drill some holes! I used a rotary tool with a 4mm drill bit mounted to a drill press. Be sure to hold the lid tightly, use a low RPM on your tool, and watch your fingers!

Next, let's set up our Raspberry Pi to be used with both CircuitPython and our sensors.

Next, we're going to attach a cable gland to seal off the USB cable from the elements. Drill a 5/8" hole on the side of the enclosure where the Pi's USB port is located. The cable gland has integrated screw threads - twist it into the hole you drilled and attach the retaining nut.

You'll need to cut and splice the Micro USB cable to fit it into the enclosure through the cable gland. Plug a Micro-USB cable into the Pi Zero W.

If you want to take your Environmental Monitor on-the-go, you might want to add a Rechargeable USB Battery Pack. We used a smaller rechargeable model with a 2200mAh capacity. Charge up your battery pack, and then plug it into the Pi's PWR_IN port. 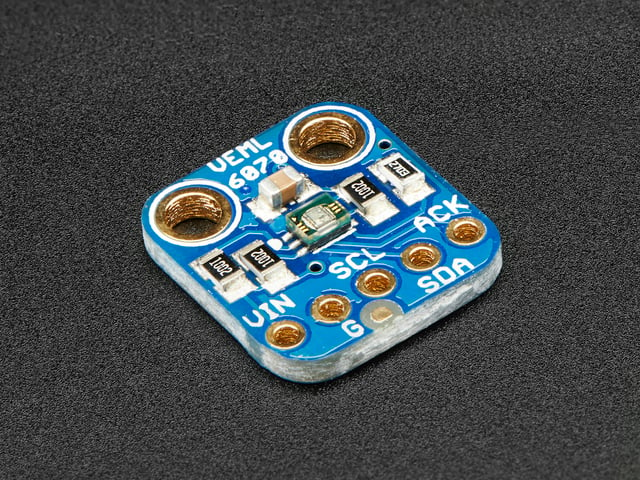 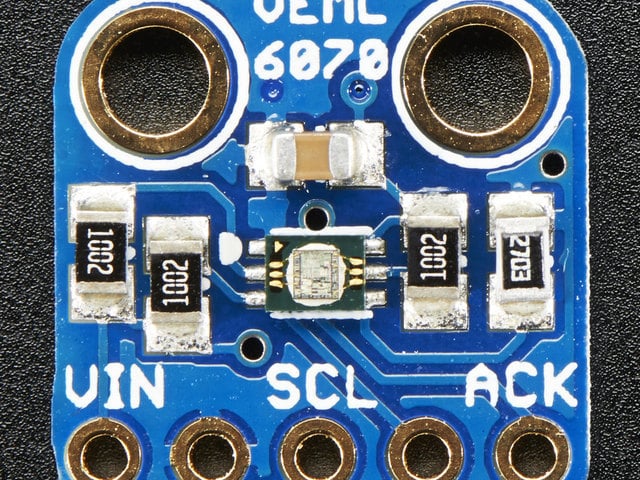