You can add mono or stereo I2S microphones to your Raspberry Pi, too! This will work with any Raspberry with a 2x20 GPIO connector.

This guide is largely based on this great git repo, which we forked for use here. Also useful was the information provided in this forum post. 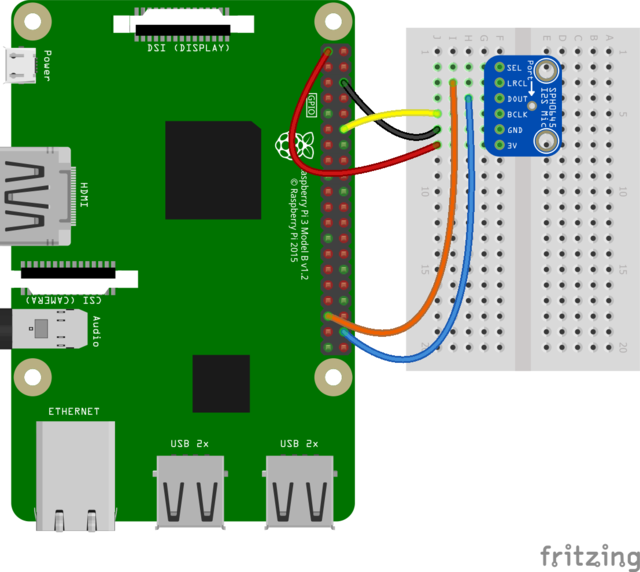 Connect both mics as above except for the SEL pin. 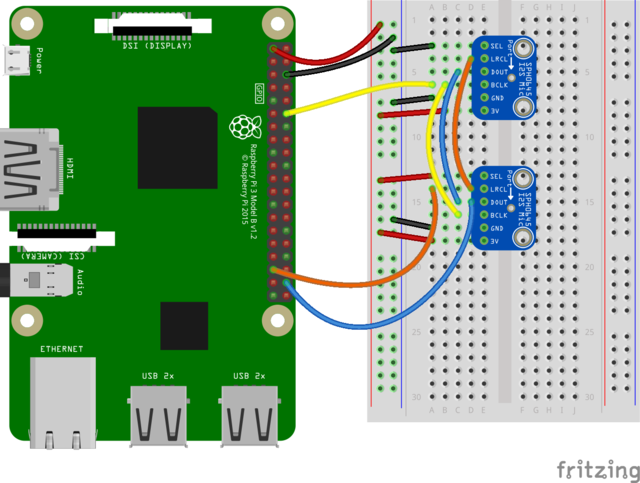 Be sure to follow all these steps in the order shown to insure the I2S mic module is built against the proper kernel headers.

Install Raspbian on an SD Card

You'll need to start with Raspbian or Raspbian Lite. Get the latest version from the Raspberry Pi Download page and follow these instructions to install the OS image to the SD card.

and then REBOOT THE PI.

Run the following command to make sure you have Python 3 and Pip installed:

This script will do all the work for you. Here are the commands to run. Make sure your Pi has network access, it needs to download the software! 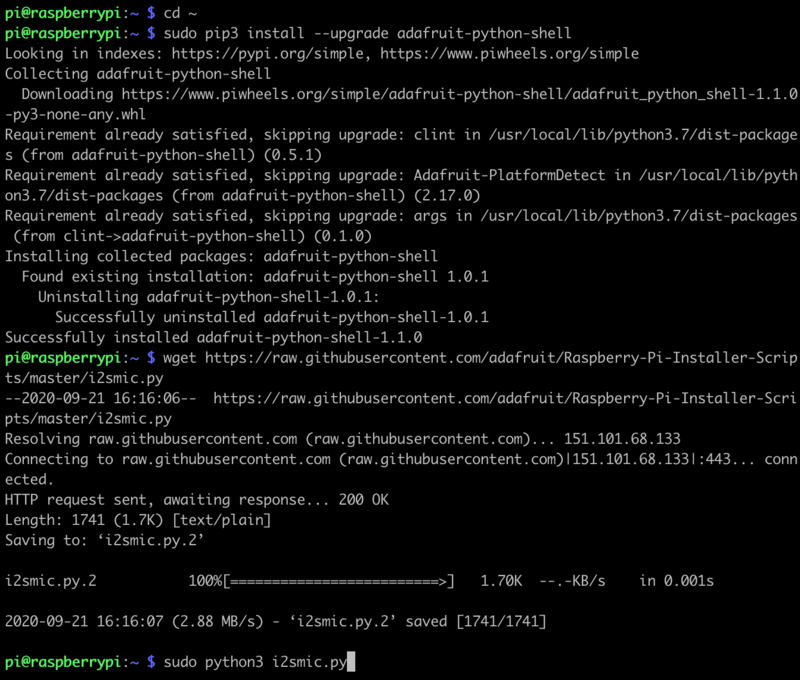 Once you run the script, you will be presented with options for configuration.

The Pi model should be automatically detected.

If you want the I2S mic module support to be loaded at boot, select Yes here. Otherwise you'll have to manually install the module each time you want to use it.

Since the script runs a system update and installs some other needed support software, it may take a while to run. Just let it go. When it's finished, you should be prompted with an option to reboot.

You need to reboot for the settings to take effect.

OK, that probably took a bit of time, but now you are ready to rock!

Use the following command to list the available input devices:

You should see a card entry with information similar to this:

Note the card number. In the screen shot above it is 0. You can record a wav file in mono with this command (change the -plughw parameter to match the card number from above):

Or, if you have two i2s mics installed, record in stereo with this command:

If all is working correctly, you should see the VU meter react at the bottom of the terminal window: 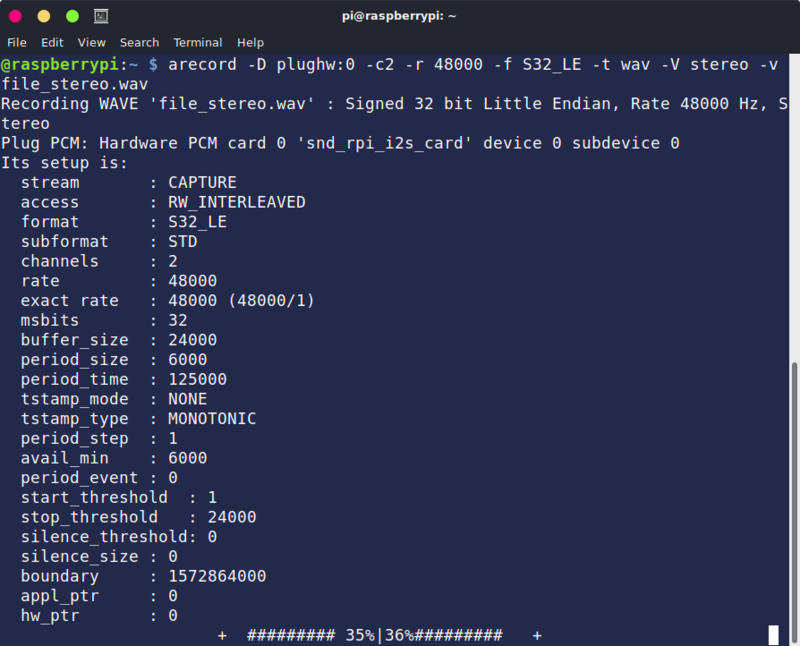 If you have speakers hooked up to the Pi, you can play the file back directly on the device:

Or, you can copy it over to your computer for playback :), make sure SSH is enabled and then:

If you chose not to auto load the module at boot, then you will need to manually load it with the following command:

Replace PI_SEL with the approriate value for your Pi Model:

You can use the arecord -l command to verify it loaded. Example on a Pi 3:

If you later run a system update and find that the I2S mic no longer works, you may need to rebuild and reinstall the driver. To do so, simply run the install script again:

It may complain about things, like git, already being installed. But you can generally ignore those error messages.

If you've deleted the repo directory since the original install, then just reclone it.

You can add volume control to your mic via alsamixer and alsa config. (Hat tip to RickTracer). To do so, create and edit a file .asoundrc in your home directory.

and put the following in: 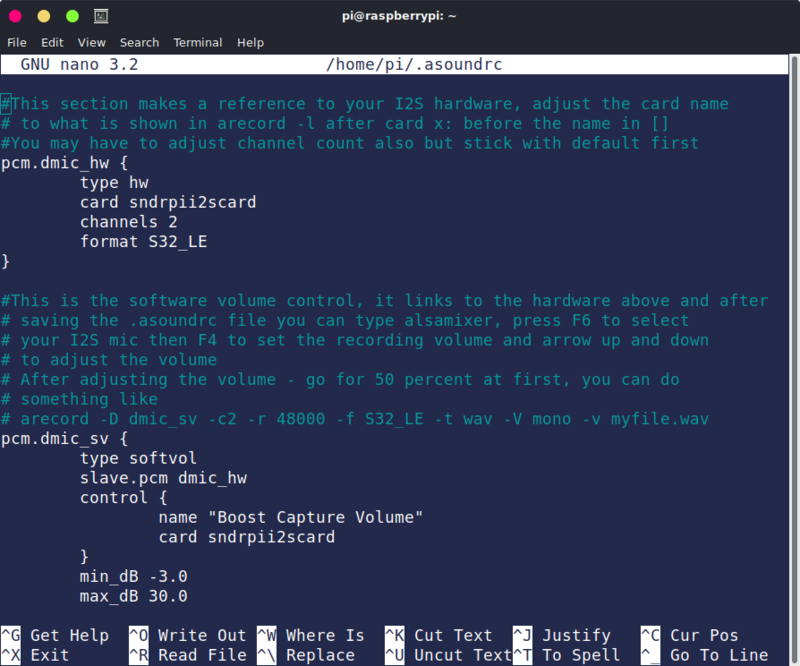 And cancel with ^C once it starts recording. 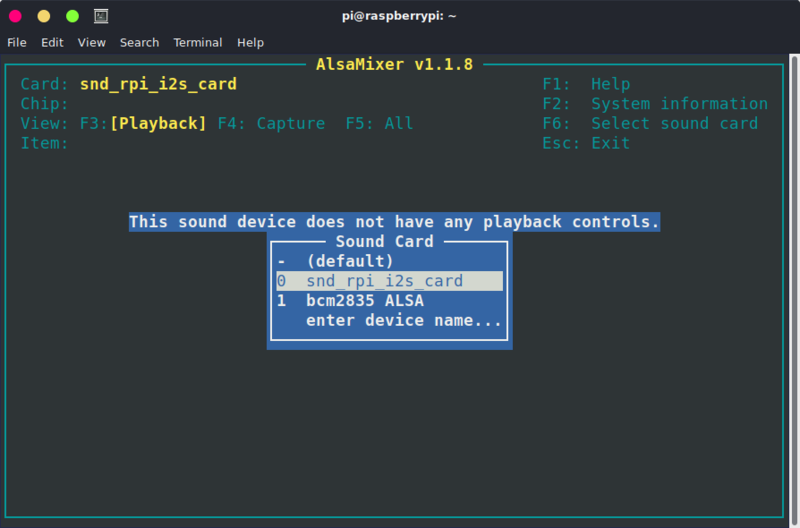 It will complain there are no playback controls (because its for recording only).

Press F4 to switch to Capture mode and you should be able to adjust the volume with up/down arrow keys. 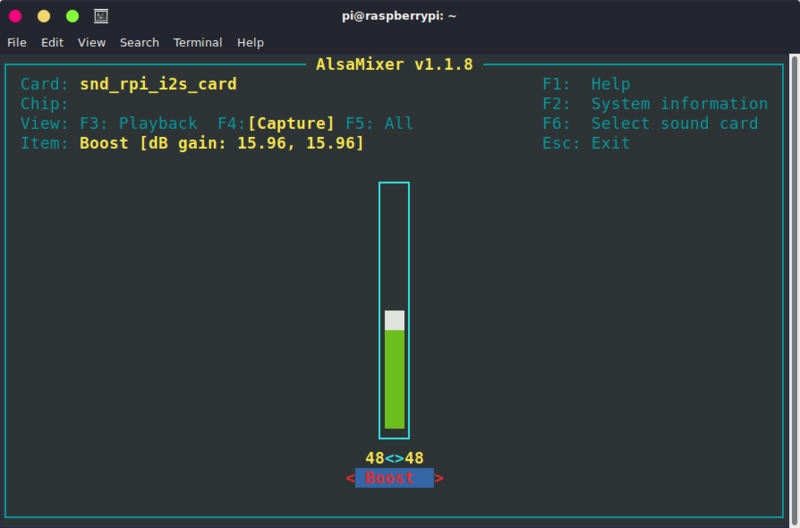 Then you can record with the i2c mic device using: