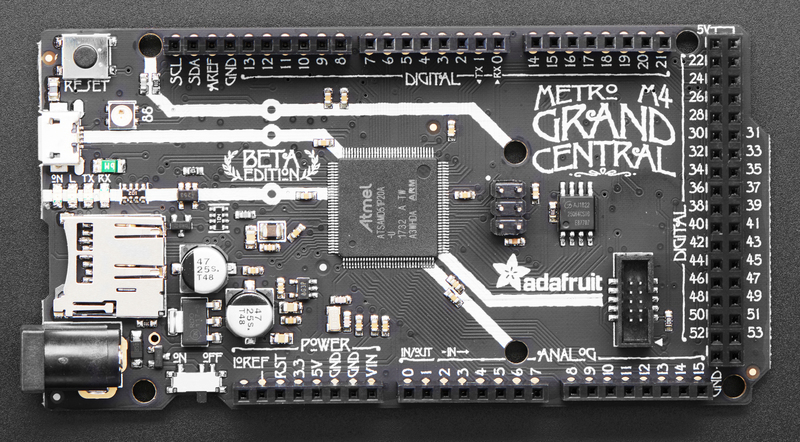 The Grand Central M4 is chock-full of microcontroller goodness. There's also a TON of pins and ports. We'll take you a tour of them now! 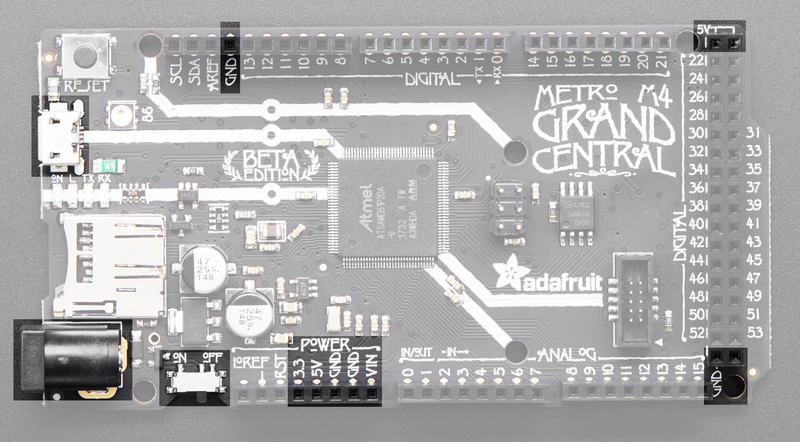 There are two primary ways to power the Grand Central:

The MicroUSB jack provides 5V at 500mA or so, there is a fuse that will shut off temporarily when more than 1000mA is drawn, this is to protect a computer USB port. You can plug this into any computer or USB charger with a USB cable. You can draw up to 500mA between the Vin, 5V and 3.3V supplies (combined).

There are four LEDs:

On early versions of the board the status LEDs were mislabeled. In this image, the yellow text is the correct labeling. 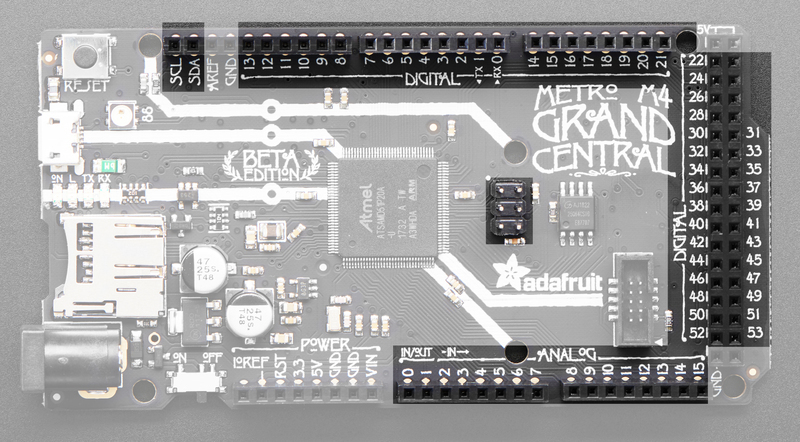 This is the general purpose I/O pin set for the microcontroller.
All logic is 3.3V

There are so many options for PWM! You can use any of the following pins:

Let's take a look at all the pin options!

However, some of them are also other things!

There's a 'camera' input peripheral you can use with some camera chips to capture video with 14-bit data width. We thought this was neat so we made sure all those pins were available. Here are the PCC pins (left) and the Grand Central M4 pins it's mapped to. Unlike other peripherals, you cannot mux these signals to other pins!

This list is organised as PCC Pin: #GC Pin.

The following are the pins corresponding to the I2S capabilities of the M4:

As part of the 'Express' series of boards, the Grand Central M4 Express is designed for use with CircuitPython. To make that easy, we have added two extra parts to this Grand Central M4: a NeoPixel (RGB LED) and an 8 MB QSPI (Quad SPI) Flash chip. 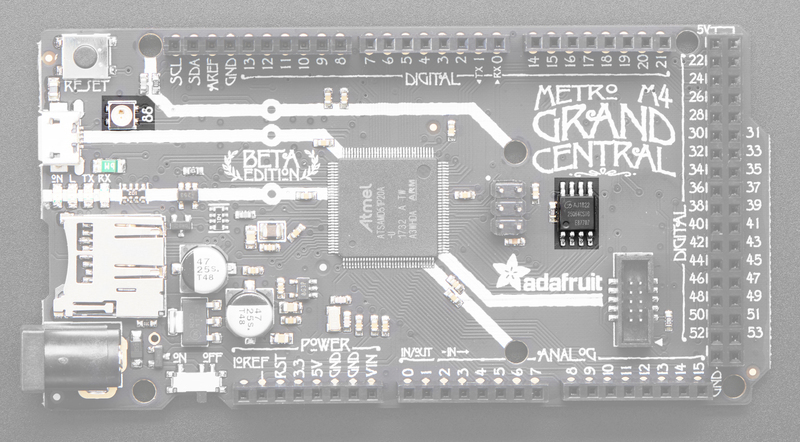 However, the QSPI port is not also on an SERCOM. So, you have to either use the QSPI peripheral or bitbang SPI if you want to talk to the chip. We have an Arduino library here which provides QSPI interfacing for Arduino. In CircuitPython, the QSPI flash is used natively by the interpreter and is read-only to user code, instead the Flash just shows up as the writable disk drive!

We've included a micro SD card slot on this board! 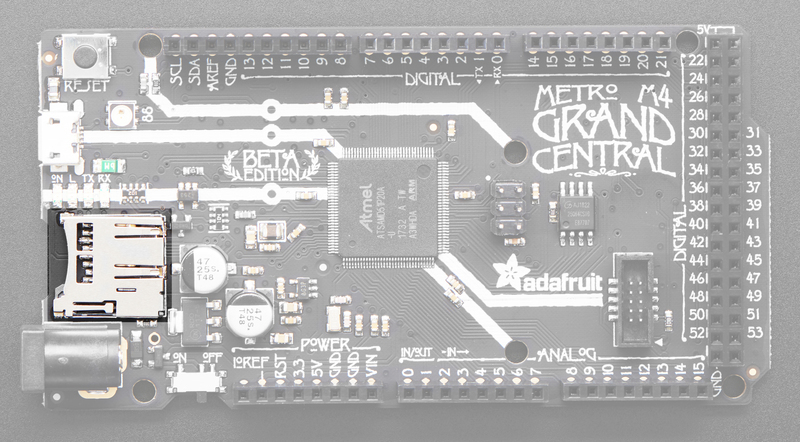 This is also on a separate SPI port, so it doesn't collide with the SPI header/port used for other devices. In Arduino this is called SPI1 and by default, the SD library will know to use this for SD card interfacing. So, if you have a shield with an SD card slot, you won't be able to use that SD card connection! The library will always use the onboard SD card socket instead. The CS pin can be referred to by SDCARD_SS_PIN

Using an SD card with CircuitPython is super simple. We've written a quick demo that uses the temperature sensor built into the microcontroller to log temperature to a file on the SD card. For more details, check out the explanation in the SD card guide.

Insert and SD card into the slot. Copy the following code to your code.py file on your CIRCUITPY drive:

Let it sit for a bit, and then unplug it and remove the SD card. Place the SD card into a reader on your computer to view the temperature.txt file.

You can use any 2x5 0.05" pitch SWD interface to connect. We suggest a J-Link, it's supported by every IDE/software that can program the ATSAMD51.

SEGGER J-Link EDU Mini - JTAG/SWD Debugger
Doing some serious development on any ARM-based platform, and tired of 'printf' plus an LED to debug? A proper JTAG/SWD HW debugger can make debugging more of a pleasure and...
Out of Stock
Out of Stock

You'll need an adapter and cable to convert the 2x10 JTAG cable to SWD.